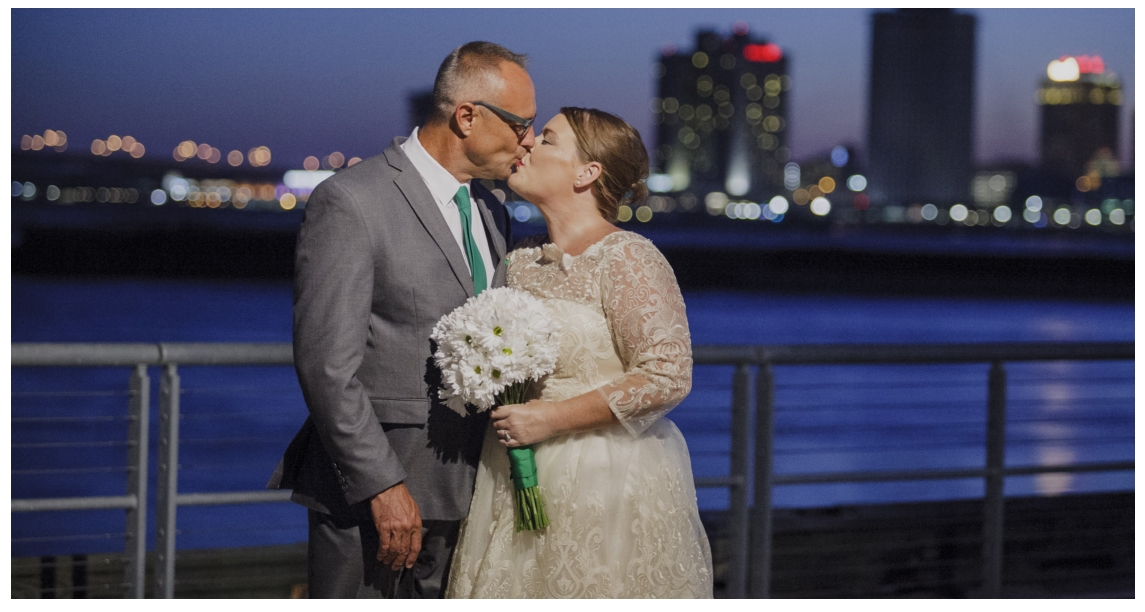 Kelley and Mark met online, sharing their dreams at New Orleans’ “Before I Die” wall on their first date before ultimately deciding to take the next step. For his proposal, Mark wanted to include Kelley’s brother, Seth, who is incarcerated. He managed to sneak the ring into a visit with Seth at the prison. In the middle of visitation, Mark got down on one knee and proposed.

With sweeping views of the Mississippi River and skyline, Crescent Park was a fitting venue. “The spot where we married has porch swings, the river and a view of the Crescent City Connection bridge, under which we’d had our first kiss,” Kelley, a Lafayette native, says. “It was just the most beautiful backdrop for us.”

Approximately 150 guests gathered for a ceremony that included original vows—Kelley even wrote a version for Mark’s children—a passage from T.S. Eliot’s “Four Quarters” and the reading of a love letter from Johnny Cash to his wife, June. The lights of the Crescent City Connection turned on right as Kelley and Mark said “I do.”

Since the couple’s wedding date coincided with the bride’s maternal grandparents’ wedding anniversary, she wore her grandmother’s wedding band as her own and also put a sixpence in her shoe from Aunt Carolyn Blackwood.

Decorations included white and yellow daisies, lighted Mason jars and sunglasses on the tables. Temporary tattoos of the couple’s faces added more whimsy, and Larry Dewitt with Music Source kept guests dancing late into the night. The couple’s first dance to “All My Mistakes”’ by The Avett Brothers happened just as the riverboat Natchez went by on the Mississippi.

Food was also part of the entertainment, with Fete au Fete food truck and a Lucky Dog cart on site. Created by Gambino’s, the three-tier, off-white wedding cake was adorned with raffia and daisies, while the groom’s cake was a giant shrimp poboy.

At the end of the night, guests were whisked off in pedicabs from Mark’s employer Bike Taxi Unlimited. Mark promised in his wedding vows that he would always wear his helmet.

The couple honeymooned at Hamanasi Resort in Hopkins, Belize, before settling in New Orleans.