Pick up a bottle of Tabasco in any of 166 companies now and you'll get the message: We're losing the equivalent of a football field an hour of valuable wetlands. And we gotta stop it.

McIlhenny Company has stepped up in a big way to save America's wetlands. At a press conference Wednesday, McIlhenny Company Chairman and CEO Paul McIlhenny, a charter member of the America's Wetland Foundation and staunch coastal advocate, introduced the new wetlands label that will be appearing on Tabasco bottles across the world.

The CEO said he often entertains friends and business associates at company headquarters on Avery Island - which is situated in the upper coastal wetlands of south Louisiana, about 163 feet above sea level. "They are amazed at the beauty of the marshes of South Louisiana but totally unaware of the fragility of the ecosystem," he said of the visitors, most of whom come to hunt and fish. Although Avery Island is well elevated, it is surrounded by swamps, marshland and bayous - an area that is home to numerous indigenous plant and animal species. It is also a prolific seafood habitat.

McIlhenny went on to talk about some of the major corporations and foundations that also have come to experience the natural area for themselves before investing in the Wetland Foundation, including The Walton Sisters, who have likewise been moved by the beauty and fragility of Louisiana's wetlands. The McIlhenny family has developed its own preservation initiatives and model for areas adjacent to Avery Island. 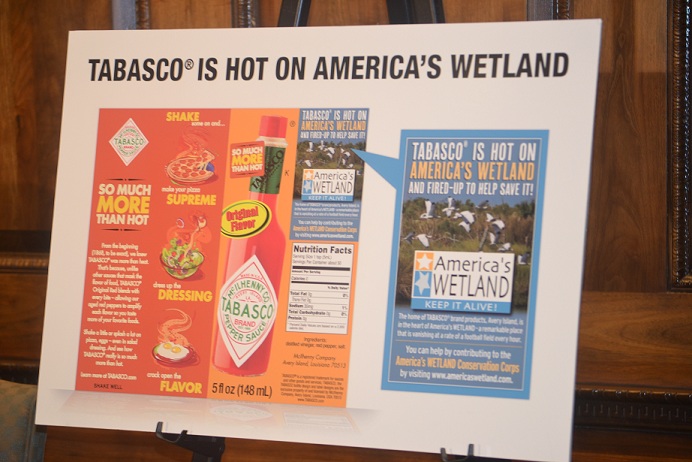 Thanks to the popularity of Tabasco, the new campaign, "Tabasco is hot on America's Wetland and fired-up to help save it," will bring worldwide attention to the effort. The label notes that Avery Island is in the heart of America's wetlands, "a remarkable place that is vanishing at a rate of a football field every hour." Now if that won't move you, nothing will. Included on the label is the website, www.americaswetland.com, where contributions can be made.

McIlhenny Company, which last year ranked No. 12 on ABiz's list of Acadiana's top privately held companies with an estimated $171 million in 2010 revenues, ships millions of bottles of hot sauce to more than 166 countries and packages it in 22 languages.

"We are experiencing the greatest land loss on the planet," said Val Marmillion, executive director of America's Wetland Foundation. "Our goal is no net loss of wetlands and no net loss of culture."

Also discussed at the press conference Wednesday, which was held at Tabasco's corporate office on Avery Island south of New Iberia, was the Entergy Corp.-funded $4.5 million study on coastal assets. The study predicts that, if nothing is done to protect coastal communities, losses due to storms, erosion, and man-made and natural disasters will amount to $350 billion by 2030, exceeding the domestic product of the region. "One of the themes I want you to take away is urgency. We cannot let this beauty disappear for future generations," said Gary Serio, vice president of corporate safety and environment with Entergy. "Unless we want to convert the beauty we have now into memories, we need to act now," added Serio, who also chairs America's Energy Coast Industry Council. 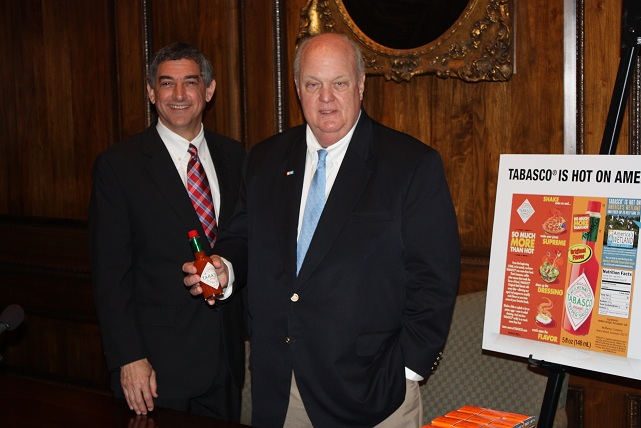 The campaign is a major shot in the arm for the wetlands preservation effort, and Tabasco is powerful entity to help spread a message that also happens to hit close to home. Paul McIllhenny is the fourth generation of the famed Tabasco sauce-making family. Avery Island has been the home of the Marsh/Avery/McIlhenny family for more than 185 years and home to original Tabasco Brand Pepper Sauce for more than 140 years. "We are doing our part in bringing the attention to this serious problem," McIlhenny said. "To lose what you find in this region would be a catastrophe of international proportions."

Several years ago, when McIlhenny inserted a small pamphlet about the plight of Louisiana's coast into Tabasco boxes, the America's Wetland Foundation heard from people all over the U.S. and from as far away as Moscow.

"We got heartwarming notes, such as one from a little boy who was contributing his allowance," Marmillion said. A couple in North Carolina hosted a Gumbo party - no doubt spiced with Tabasco - and sent us the donations from their friends. A couple in New York City was inspired to ask their wedding guests to contribute to the wetlands.

"Tabasco is one of those worldwide, iconic products, so this is helping us raise awareness about Louisiana's coastal crisis all over the world," Marmillion continued. "The foundation is deeply appreciative of the McIlhenny personal and corporate commitment to our work."

McIlhenny announced the Tabasco packaging campaign at the "Blue Ribbon Resilient Communities Forum," the last of 10 held during the past year from South Padre Island to Orange Beach. The BRRC initiative, sponsored by the America's Wetland Foundation, has invited coastal leaders and stakeholders to forums in an attempt to spread accurate information about what the future holds and to help local communities begin envisioning their future and make the choices they must make in order to achieve resiliency.

Paul McIllhenny also previously served as a member of Gov. Mike Foster's Committee on the Future of Coastal Louisiana and the Governor's Advisory Commission on Coastal Protection and Restoration and Conservation.