Paramedics from around the country arrive in Lafayette and Louisiana. 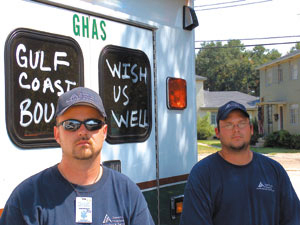 Paramedics Toby Myers and Mike Howard regularly deal with tragedies in their hometown of Galesburg, Ill. But nothing they had seen on their jobs matched the sense of urgency that came across their television screens in the wake of Hurricane Katrina. As trained emergency responders for the last decade, Howard says the need to be at the scene was a natural response.

Leaving their families behind, the pair arrived in Lafayette on Saturday, Sept. 3, after a 14-hour drive in an ambulance with "Gulf Coast Bound ' Wish Us Well" written on its back windows.

Myers and Howard are just two of the hundreds of medics from across the country who came in to lend their support to Hurricane Katrina victims. Every one of Galesburg Hospitals' Ambulance Service's 78 employees volunteered to be a part of the effort, but the small company could only afford to send two. (All of the ambulance companies expect to eventually be reimbursed for their expenses by FEMA.)

"Everybody wants to be here," says Myers, who is one of GHAS' senior medics.

According to Kenny Savoie, who has been serving as a state mutual aid coordinator for Acadian Ambulance, medics began pouring into the state about two days after Katrina hit. The emergency responders are all on contract from FEMA and many were deployed locally through Acadian Ambulance. He says approximately 160 ambulances and 480 medics, based everywhere from California to Pennsylvania, stationed themselves in Lafayette over the past two weeks. Medics are being housed in the bottom three floors of UL Lafayette's Bancroft dorm, which was closed this semester due to electrical problems, as well as space provided by the fire department and Meadowbrook Hospital.

The work of the visiting medics runs the gamut from waiting long hours on standby to running a boat through the streets of New Orleans to rescue stranded residents. The mixed placement of emergency responders highlights the unprecedented nature of the disaster and the challenges of the rescue effort.

"We didn't know what to expect and at that point didn't care," says Kenny Hoffman, a team leader and paramedic with Med Flight of Columbus, Ohio, who came in with a team of about five ambulance units from Ohio on Friday, Sept. 2., at a time when the crisis had reached its apex.

"Without a doubt, this was the most life-changing experience any of us have had, and we deal with death every day," he says. "It was truly seeing people in need in its most raw form. You see on TV where military rule has taken over, and this is like something you might see in Black Hawk Down or something like that. To see something like this in a city many of us have been to before, it changes your life."

Hoffman spent a day with New Orleans emergency medical responders in a boat along Crete Street, near the French Quarter. Besides pulling survivors out of the water, he also pulled flight line duty helping board patients onto helicopters at the Louis Armstrong International Airport and the New Orleans Convention Center.

"You never expect to see people in a city in the U.S. in these conditions," Hoffman says. "A city of refugees in the United States." At the New Orleans airport, "people were being herded like cattle out of their own city" by armed military troops, he says. "These people will never be the same."

Paramedic Greg Schano, of Cincinnati, Ohio, came to Lafayette in his mobile intensive care unit, expecting the worst. However, he says, a lot of what he did could be described as "general transport," as well as providing emotional support at the shelter in Thibodaux.

"I don't feel like we were used to our fullest capability," he says. "But we're just here to do what we can do."

Keith Simon, spokesman for Acadian Ambulance, says the company was pairing units as they came in with their own ambulance services for support. This ranged from teaming up with their medics on calls to standing by to relieve exhausted units.

"Early on, there wasn't a lot of organization, so we were kind of taking charge," he says. It wasn't until Saturday, Sept. 3, that FEMA had established its organization and began directing all of the medics.

"It probably could have been better handled," Simon says. "We needed help to get people evacuated. Everybody had a water [shortage] issue."

He adds that several factors played into hampering relief efforts.

"It was such a massive undertaking," he says. "You could have had a synchronized helicopter landing every 10 minutes and you still couldn't have gotten all the people out in three days and then you factor in the violence and the fact that people didn't want to go in there. There wasn't enough security."

For medics Myers and Howard, the trip was full of unimaginable scenarios. On their first day, when they were stationed at the I-10/610 split in New Orleans to receive evacuees from rescue boats, they heard another common complaint of relief workers. "The thing that surprised me the most," Howard says, "was the people coming in on the boats were saying, 'We're finding hundreds of people, but they refuse to come with us. They're staying at home.'"

Myers and Howard were wearily heading back to their temporary home at Bancroft Hall Tuesday afternoon, Sept. 6, after having been on duty for the past four days, with a total of about 10 hours of sleep. A lot of that time though, Howard says, was spent awaiting orders. "There's a lot of resources here," he says. "You're seeing on TV that there's thousands of people that needed help and you get here and it's a lot of sitting and waiting. We haven't quite figured out how it works yet."

Still, he insists, the time that they did spend helping people more than made up for it.

"I told my family if I can come down here and help one person, it's worth the trip. And we've done that, so it's definitely worth it."