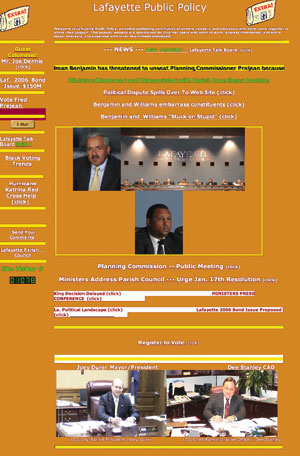 It also features a derisive editorial that labels veteran African-American city-parish councilmen Louis Benjamin and Chris Williams as being "stuck on stupid." African-American Prejean is a candidate for District 44 state representative, a race Williams is also eyeing.

The site has become a political football, with several city-parish officials refusing to comment on it or dismissing the site. When asked if it was appropriate to have his office bio linked from a site that blasts two of the city-parish councilmen he works with, Chief Administrative Officer Dee Stanley answered, "I will not comment on the site."

Durel replied similarly, saying he assumes that LCG's Web site "belongs to the public therefore it is fair game." He declined further comment on Prejean's site.

The site raises the question of how far Web site operators can go in using Lafayette Consolidated Government's name to lend credence to their own political positions. According to Lafayette attorney William Goode, who handles free speech issues, Stanley and Durel are public figures whose pictures can be pulled from LCG's publicly owned Web site. Therefore, even if a hate group was using his picture on its site, Durel may not be able to force them to remove it.

"It's all public stuff," Goode says. "It's out there anyway."

Goode notes the only time the mayor may be able to force an organization to remove his picture is if it in some way constituted defamation.

In the case of Prejean's site, Goode says it purports to be a discussion board for local government issues, all the more reason for it to include a picture of the mayor with links to the LCG Web site. Durel and Stanley were only recently made aware of Prejean's site and never gave him permission to use their pictures; both say their presence on the site is not an endorsement of Prejean's candidacy.

However, the two also have not asked Prejean to take the pictures down. And a day after being shown the site, Durel made comments that echo Prejean's grievances with Benjamin and Williams. The Advocate quoted Durel as saying that north Lafayette needs better leadership from "people who aren't angry and bitter," a not-so-thinly-veiled reference to Williams and Benjamin.

In an editorial titled "Benjamin and Williams embarrass constituents," Prejean writes that Williams and Benjamin are confrontational to the point of being counterproductive and accuses Williams of being used as a political pawn of Gov. Kathleen Blanco's husband Ray Blanco, whom Williams used to work for at UL Lafayette.

Councilman Bruce Conque, who serves as the council liaison to the Planning and Zoning Commission, says Planning Commissioner Prejean is within his rights to operate the site and doesn't feel it will compromise relations between the council and the commission.

"He's entitled to freedom of speech," Conque says. "As far as his ability to perform as a commissioner, I don't see any problem there. If there is a move to remove him, that can come before the council and is subject to a majority vote.

"I looked at the site. I read it in detail," he continues. "I don't think it could be considered as a mouthpiece for consolidated government. He has the right to link to our site, there's nothing that prevents that. As for the pictures, the only people who could question that are Joey and Dee."

Prejean launched his site last spring, billing it as "an online publishing community of writers, readers and educators who have come together to share their passion."

The site features news on several of Prejean's own initiatives, including updates on an alliance of black ministers he helped organize to fight for renaming a major Lafayette street after Martin Luther King Jr.; a planning commission project to develop a master plan for North Lafayette; and a link to his other Web site, www.fredprejean.com, that is dedicated to his candidacy for state representative.

Prejean says he was motivated to post his editorial on Benjamin and Williams by comments from people in the black community who were afraid to speak out against the councilmen. He claims Benjamin and Williams label white people who speak out against them as racists and any other black person who opposes them as a "spook by the door," a pejorative term referring to a black person who spies on the black community for white people.

"I thought, somebody needs to just step forward and tell the truth and hopefully others will follow," says Prejean. "Since that time," he adds, "I think Mr. Louis [Benjamin] and Williams have kind of backed off because they're beginning to realize that they are not the only people in the district who have ideas."

Benjamin could not be reached for comment. Williams says, "I'm not going to comment on Fred Prejean. I don't really respond to those types of editorials where people are giving their personal opinions. I haven't seen the Web site. I don't know what Mr. Prejean's motives are, but we'll address them at the appropriate time."

Since posting his article on Benjamin and Williams two weeks ago, Prejean says he has received about 15 e-mails commenting on the site. "Absolutely all of the e-mail I've received has been very positive," he says.

He also says that since the editorial's debut, his site has registered more than 1,000 hits. Prior to that, he says his site was averaging roughly 100 hits a month. The increased traffic may motivate him to more actively manage the site, which he has been updating about once a month. "This started out as a hobby," he notes. "As people begin to visit the site and it becomes more popular, I'm going to [update] it weekly if I have to. I'm hoping I can keep people interested."

In the meantime, government officials are doing their best to appear disinterested in Prejean's Web site. "Fred did this completely on his own, and I really couldn't comment on it," says Planning and Zoning Commission Chairman John Barras.