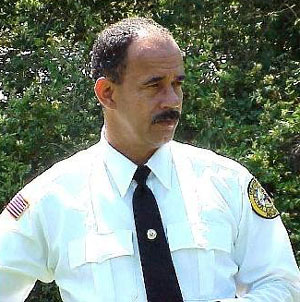 Last week, Opelousas Police Chief Larry Caillier was indicted on five counts of malfeasance in office by a St. Landry Parish grand jury. The indictment stems from four fights that occurred on Sept. 25, 2004 within the Opelousas city limits, after the "battle of the bands" event at Donald Gardner stadium in Opelousas. The indictment contends that Caillier instructed his officers not to respond to calls for help and refused to offer assistance to the St. Landry Parish Sheriff's Office. Caillier's arraignment has been set for June 17. Kris Wartelle, spokeswoman for Louisiana Attorney General Charles Foti's office, says the grand jury will reconvene in May to continue its investigation of Caillier. A state legislative audit released earlier this year has questioned the handling of funds within the Opelousas Police Department, including $225,000 in federal grant money for a bike patrols. Last week, before the indictment was handed down, four Opelousas police officers did not appear before the grand jury as instructed. Wartelle says those officers have been re-subpoenaed. "We're giving them the chance to explain their absence," she says, "and then we'll go from there." ' RRF

The next time your dog decides to poop in your neighbor's yard, a proposed ordinance would mandate that you clean up after your canine. District 5 Councilman Lenwood Broussard wants to crack down on Lafayette's rampant dog droppings. Broussard introduced what is commonly referred to as a "pooper-scooper ordinance" for both city and parish residents at last week's city-parish council meeting. If passed, the law would make it a misdemeanor (punishable by up to a $500 fine and/or up to 30 days jail time) to fail to clean up after your dog. "I don't think it's a big, big issue, but it's an issue," Broussard says. "When someone has a dog on a leash and allows it to use your yard, I think it's wrong." Broussard says he recently fielded a complaint from a concerned constituent whose property had become the frequent dumping ground of a neighborhood dog. Although he only received the one complaint, Broussard says, "I think that probably happens quite often" and adds that pooper-scooper ordinances are becoming commonplace across the country. The council is scheduled to vote on the issue at its May 3 meeting. ' NS

Dennis Seagraves never imagined in 1992, when he came to Acadiana to deliver goods and water to a Jeanerette Church in the aftermath of Hurricane Andrew, that he'd one day be running a company here ' much less owning one.

But on May 10, the court-appointed restructuring officer of Southern Structures learns whether he'll be the new owner of the company. Brought to the brink of financial ruin by its former management, the Youngsville-based manufacturer of metal buildings was put on the block as part of a liquidation plan filed in bankruptcy court earlier this year. Its former owner, Stefan Leonpacher, and his assistant/part-time church leader Terrie Kamm, ran the business under a cult-like atmosphere ("Fall from Grace," July 14, 2004).

"The creditors and I agreed that we would sell it for a minimum of $4 million," Seagraves says. Had the business been shut down and sold off in pieces, it was worth about $2.5 million, with $9 million in debt. Bids were due by Friday, April 1, and only one was submitted in writing, for less than the minimum.

Seagraves immediately sought and received approval from creditors and the court to place his own $4 million bid ' with the help of his employees. "I have potential investors if I need them, but we're looking at doing this, just me and the employees," Seagraves says.

As stipulated in the liquidation plan, on May 10 interested parties can bid in increments of $100,000, and Seagraves can counter in equal amounts. "Anyone who wants to bid can show up with proof of their ability to write the check," Seagraves says.

The manager, who relocated from Cabot, Ark., in July 2004, seems to have found his new niche in Acadiana. He's put 57 employees back on the payroll and Southern's business back in order ' not to mention building a community profile of his own, in part by recently helping start a Chamber of Commerce in Youngsville.

In early December, Seagraves' wife joined him, and the couple hopes to make the Broussard/Youngsville area its permanent home on May 10. "I have been well-accepted," Seagraves says.