Lafayette artists and entrepreneurs are utilizing Kickstarter.com as an innovative means of fundraising.

Last summer, Jeremy Broussard with Corvus Press launched a Kickstarter campaign for an upcoming book about Tupelo, Miss. With a goal of $2,500, the campaign would raise funds for production costs and help defray expenses for local writer Jane Blunschi. Broussard began drumming up support by e-mail and Facebook but found that many of the people he was contacting didn't know what Kickstarter was.

Lafayette artists and entrepreneurs are utilizing Kickstarter.com as an innovative means of fundraising.

Last summer, Jeremy Broussard with Corvus Press launched a Kickstarter campaign for an upcoming book about Tupelo, Miss. With a goal of $2,500, the campaign would raise funds for production costs and help defray expenses for local writer Jane Blunschi. Broussard began drumming up support by e-mail and Facebook but found that many of the people he was contacting didn't know what Kickstarter was. 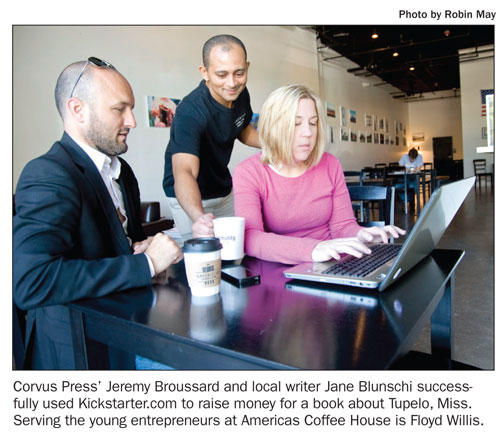 "We had a bit of an uphill battle on that one," Broussard says. "It spread the word about the book, even if people didn't participate." The project was still a success, meeting its $2,500 goal from 30 backers. After learning a few lessons from his first go at Kickstarter, Broussard is preparing to launch a second campaign.

"We're in a whole new world now," he says. "People know about Kickstarter, and they browse it and check out new projects. I'm expecting a much greater response."

Corvus Press' upcoming campaign will raise money for a travel guide to Festival International, planned for release early next year. Broussard is working with a local videographer to create a video for the campaign and finalizing the financial goal and rewards.

He's not alone. There are currently at least six Lafayette projects up on Kickstarter.com, running the gamut from local band The Revelers raising funds to record an album to a documentary film about Wayne Toups, a dance performance traveling to Canada, an illustrated CD by Johanna Devine and Denise Gallagher, and a play at Cite Des Arts. More, along with Broussard's, are set to launch in the next few weeks, proof that Lafayette has discovered Kickstarter. 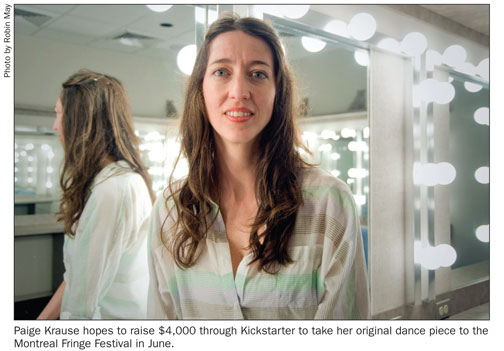 Paige Krause, who's behind the dance campaign, is a choreographer and education coordinator at the Acadiana Center for the Arts. She launched her campaign in early April to raise funds to take her original dance piece, "I've Stopped Having That Dream I've Been Having," and its cast to the Montreal Fringe Festival in June. Her goal is $4,000.

"I have a few friends who've done Kickstarters, and I've read it's funding more artists this year than the NEA [National Endowment of the Arts]," she says. "It's pretty amazing that people can get behind you with something you want to do."

Krause is correct about Kickstarter's level of funding. In February, it was widely reported that the 3-year-old Web startup was on track to distribute more than $150 million to users' projects in 2012, $6 million more than the entire fiscal year budget of NEA. 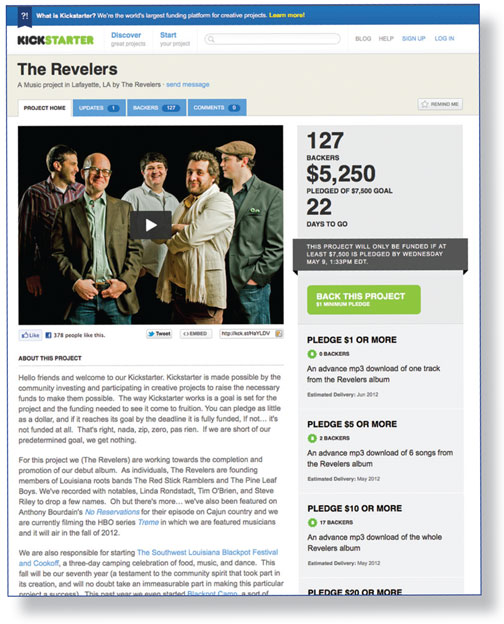 Kickstarter restricts projects to the creative fields of arts, comics, dance, design, fashion, film, food, games, music, photography, publishing, technology and theater. The company does review every project before it launches and collects a 5 percent fee, but setting up a campaign is free and fairly simple. Most campaigns have videos that illustrate their product or mission, and all offer rewards for pledging at different levels, from as little as $1 all the way up to $10,000.

Krause says that, as opposed to writing a grant for funds, Kickstarter offers a much easier medium for artists. "It's a creative way to put your piece out there and have a video attached to it," she says. "With dance it's such a visual art form, you really need to see it."

Michelle Vallot, creator of Zydeco Bars, was hard at work on her Kickstarter video earlier this month. "We're trying to roll out two new products, a Choco Zydeco pecan brownie bar and a Pro Zydeco protein bar," she says. "We thought that if we did it using the Kickstarter format, we could talk about our original sweet potato bar and the two new products we're launching, all in one."

Vallot's projected fundraising goal of $20,000 would go toward expanding Zydeco Bars' reach in stores across the country and marketing the new products. "We're really trying to sweep the nation, going southwest through Texas and then trying to get into California," she says. "Kickstarter's probably a good thing because of the sheer number of people who will see what we're doing." 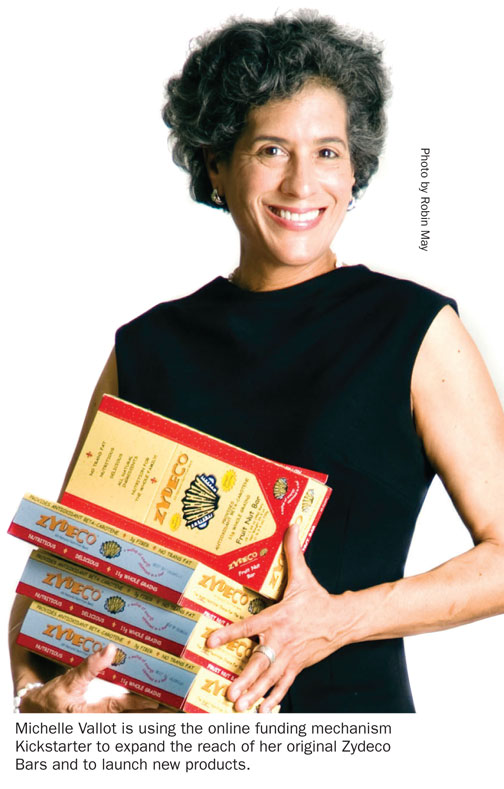 Krause agrees with the exposure Kickstarter provides. "I've had a few friends that don't live in Lafayette put up funding for it," she says. "It's a great way to keep connected with those artists and collaborators you've worked with in the past, and they get to see what you're working on. It reaches such a wide range."

Kickstarter offers people a way to plug into their communities and become part of a larger group, even if they've moved away from home. "What's amazing about Kickstarter is it turns it over to the community," Broussard says. "Then, thankfully through this platform, my brother in New York can plug into the projects that are in Lafayette, and he can remain a part of this community. It connects people around the world to amazing local talent."

He's hoping to tap into Festival lovers around the globe with his book campaign. "I think this is a crowd that is a bunch of zealots about Festival," he adds. "Several hundred thousand or so come here from all over the planet, and Kickstarter reaches those people."

Geoff Daily with local group FiberCorps says Kickstarter directly supports its mission of advocating the use of technology to help the community. This summer, FiberCorps plans to launch its own campaign to raise funds and awareness for projects resulting from its April 24 CampFiber for Creatives event, part of INNOV8.

"We think crowd funding is one of the interesting tools out there, and Kickstarter is probably the best way to do that," Daily says. "It provides a whole new form of capital available to creative professionals who are looking to get projects off the ground. If you have a great idea, especially one that's nontraditional, then why not throw something up there?"

To support these and other local projects, log onto www.kickstarter.com, and type "Lafayette, LA" into the search box.