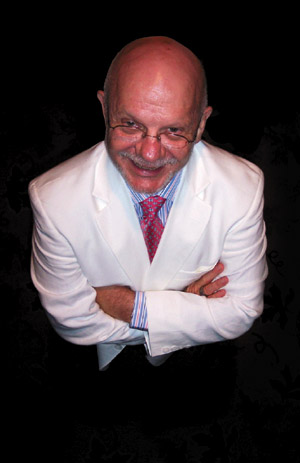 John Hill was only 24 years old when he first met Edwin Edwards. In early 1971, Hill was covering politics for The News-Star in Monroe and Edwards was running for governor. At a political fund-raiser of about two dozen people, the Bastrop native watched Edwards, the virtually unknown Crowley congressman, work the room of potential north Louisiana donors, moving quickly but acknowledging everyone present.

"When he gets to me," Hill recalls, "he finds out that I'm a reporter and he just talks and talks and talks and talks. I'm sitting there thinking, 'This is really interesting, I'm talking to this candidate and congressman about all of these big important issues.'" The host (whom Hill says was "in his cups") joined the conversation, threw his arm around Edwards and said, "Governor, I guess you know you're talking to the No. 1 political reporter in northeast Louisiana." (At the time, Hill says he was the only political reporter in northeast Louisiana.) "Edwin looks at me, winks and says, 'Yes, I know that. Why do you think I'm standing here licking his ass?' And that's how I started."

Later on in both men's careers, when Hill wrote unfavorably about Edwards, the governor charged at him at a public gathering and threatened to "whip his ass" once he was out of office. "So for my entire career," Hill says, "Edwin Edwards had this preoccupation with my ass."

The veteran reporter's career is ending on a higher note than the imprisoned Edwards, who's serving time in a federal prison on fraud and racketeering charges. Hill took a retirement buyout package from Gannett, and after 38 years as a reporter, his last day on the job is this Friday, Aug. 17.

Hill's first day on the job as a capital correspondent in Baton Rouge was Halloween 1973. He already had been reporting on politics for The News Star since 1969. At the time the paper was owned by the same family that owned The Shreveport Times. Hill had attended college at LSU, but he had no idea he would spend nearly 40 years working from within "the bowels of the Capitol," in a windowless office in its basement.

In 1979, Gannett bought both The News-Star and The Shreveport Times. Three years later, Hill would become a contributor to the fledgling USA Today, the national newspaper owned by the Gannett chain. When Gannett later acquired The Alexandria Town Talk and The Lafayette Daily Advertiser, Hill was named the capital bureau chief for all four papers, covering Baton Rouge and state politics.

Of all the stories he has witnessed and recounted over the years, Hill says the one he will remember the most is his own. In August 2000 he was diagnosed with prostate cancer and had successful surgery a month later. He wrote about his personal experience for the papers. "An amazing amount of men, one out of four, is going to develop prostate cancer," he says. "I wrote about it and opened the mail one day and there was a letter saying, 'Thank you for saving my life.' It was from someone who had, because of this series, went in and got a cancer check and found it through early detection." Hill heard from multiple readers who found and successfully treated their prostate cancer.

But the biggest political story of his career ' and the one that forced him to consider retirement ' was Hurricane Katrina. "My heart has been really in New Orleans since the storm," he says. Hill already was renting a second home there, part of an 1832 townhouse, just four blocks from the convention center. Four days after Katrina hit, he returned to the city, rented out two additional apartments in the building and spent more than a month running a bureau for USA Today.

"That's when I became committed to retiring as soon as possible and moving down here fulltime to help in the recovery," he says. "I felt like there had been a death in my family. I think the entire state of Louisiana felt like there had been a death in the family, and we all went into the stages of grief that we're still in. It was horrifying, and the stories were just so intense. All I had to was to walk out the door and find the first person I ran into on the street and there was a compelling story to be told. There were 500,000 compelling stories. Everybody went through this and had a unique experience. I remember telling a young [Associated Press] reporter, 'I really feel sorry for you guys because this is really the biggest story of my entire career, and I'm nearing retirement. You guys are just starting out. I don't know what you're going to do after this.'"

Hill later helped some friends, an 80-year-old couple, sift through the remnants of their lives with a shovel and a wheelbarrow, in hopes of saving some mementos and keepsakes in their flooded New Orleans home. "I can't say I know how it feels to lose everything, but I have a clue," he says. "I went through their lives day after day after day for about two months, sifting through their belongings, and I spent so much time there, at least I understood what people were doing when they went back into their houses ' the work they were doing."

The storm and its aftermath solidified Hill's resolve to retire and pursue other avenues. He's considering media consulting, teaching and even consulting for political campaigns, which he says he can't even consider or discuss until he leaves his current post. When he does, Gannett will not fill his position. "There will be no replacement," Hill says. "Mike Hasten will be the single correspondent." In his work with the American Journalism Review, Hill has watched the steady national decline in coverage of local politics. "Newspapers are cutting back and closing state capital bureaus," he says. "I always knew when I retired I would not be replaced. I've known that for some time."

Hill's also witnessed the rise of a new breed of media. Newspaper deadlines are no longer daily, but every second of every day, with papers pushing to post content online first and break news stories. He says in the rush to reinvent itself, the newspaper biz doesn't always get it right the first time and sometimes has to make corrections and provide greater context in follow-up stories.

"But the most alarming I think is the loss of civility," he adds. "People are no longer civil to one another in the political arena. And a lot of these angry people on blogs and talk radio are getting into personal attacks and nastiness. We were taught in high school debate that you could disagree without being disagreeable. Somehow, people are beginning to think that you have to be disagreeable in order to disagree."

Hill knew in December that it was time to ride into the sunset. "It takes an awful lot of energy to sit around and think up creative ways to cover a campaign that are fresh and better," he says. "It's just enormous. Right now, this is not the most fascinating campaign of my career either. So there were a number of things that just came together at this particular time. You sit down and in your heart of hearts, you know that it's just time to go. I want to leave this while I can still do something else. And the idea of avoiding having to cover an election campaign is really delicious."