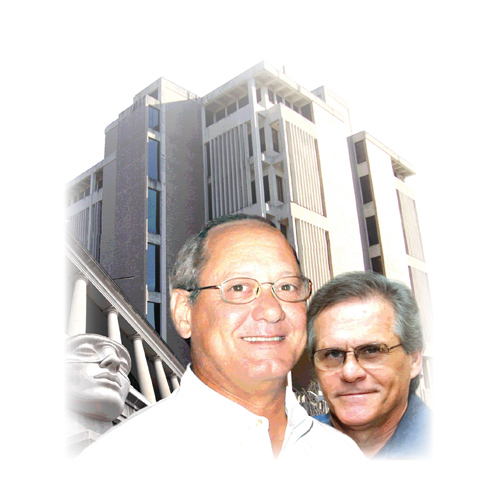 Just days after District Attorney Mike Harson informed The Advocate that he had appointed an assistant district attorney to look into whether some people cited for OWI had actually performed their community service work, sources told The Independent that ADA had subpoenaed individuals to appear for questioning.

Just days after District Attorney Mike Harson informed The Advocate that he had appointed an assistant district attorney to look into whether some people cited for OWI had actually performed their community service work, sources told The Independent that ADA had subpoenaed individuals to appear for questioning.

Sources close to the ongoing federal investigation into Harson's handling of OWI cases - in particular the pretrial diversion program and expungement process - tell The Independent some in the DA's office do indeed have doubts about how cases were prosecuted. Our sources would not say who is being called into the DA's office for questioning.

One source says a number of the cases being scrutinized were handled by private investigator Robert Williamson. While attorneys typically are retained for OWI cases, Williamson for some time had been working as a paid consultant for those charged with this crime. In essence, those facing OWI prosecution were opting to hire Williamson, rather than an attorney, to handle their cases.

Williamson's involvement appears to be at least part of the FBI's focus.

The FBI probe into Harson's handling of OWI cases came to light Feb. 27, when federal agents paid a visit to the Arnould Boulevard home where Williams resides, the same day they were at the district attorney's office sifting through the desks and files of Barna Haynes, Harson's longtime office administrator, and ADA Gregory Williams. Haynes was put on unpaid administrative leave by Harson two weeks after the FBI came calling.

Lafayette Parish Clerk of Court Louis Perret would not comment last week on whether his personnel had been asked by the DA's office to process the subpoenas.

Perret did confirm that the FBI searched two computer servers on the third floor of the courthouse the weekend of April 14. That search was first reported Saturday, April 21, by The Advocate. The DA's office has two servers on the clerk of court's network, according to Perret. "I can confirm that they were there and that's what they were looking at," Perret told The Independent.

In that same Saturday Advocate story, Harson said he had assigned an ADA to investigate whether community service hours listed as being performed by some of those charged with OWI were actually worked. On Thursday of last week, Harson identified Keith Stutes as the assistant district attorney who has been looking into the community service issue on some OWI cases, but Harson said he did not know whether anyone had been subpoenaed. "I'm not aware of that," he said. "It could be part of what Keith's doing. He could have issued, possibly, some DA subpoenas. I don't know for a fact if he did."

Harson said it would not be unusual for him to be unaware of such action taken by one of his assistants. "He's handling it on behalf of the office," the DA said. "I'm not looking over his shoulder every step he takes."

Harson did confirm to The Advocate that the internal investigation would be centered on potentially fraudulent community service hours submitted by at least two people in connection with their DWI convictions. At least one of those cases was taken by the FBI during its first search, he told the paper, which noted:

Both individuals in question secured plea deals from the District Attorney's Office that sped up the judicial process and allowed them to complete their probation requirements, such as community service, payment of fines and court costs, and substance abuse and driver improvement courses, prior to pleading in court, according to court records.

Since their probation conditions had already been met, both were given suspended sentences and their probationary periods were either shortened or eliminated entirely, according to court records.

Jill Meaux, executive director of the Outreach Center, confirmed that Crump was not employed at the center during the dates listed on both letters.

The Advocate found at least 16 OWI cases where community service paperwork was submitted by Crump on behalf of AOC: two for work completed after she was terminated and another for hours worked nearly nine months before the person was arrested on the OWI charge.

Reached by phone last week, Stutes said he was busy and would have to return The Independent's call. By press time Monday he had not done so.

On the matter of the ongoing federal investigation of his office, Harson said he continues to cooperate fully with the feds.

It's unclear, however, how the feds are reacting to the DA's office looking into the very cases it is likely scrutinizing.

Sheila Thorne, an FBI spokeswoman in New Orleans, declined to comment on that issue and the ongoing investigation of Harson's office.