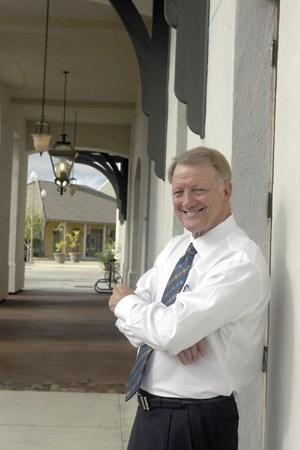 The illustrious family name so synonymous with Lafayette's City Club has severed ownership ties with the club it founded in 1978 and later relocated to River Ranch in 2002. In mid-December, Lafayette's B.I. Moody III family sold its interest to River Ranch founders Robert Daigle and Rodney Savoy and their San Diego partner, Robert Gagnard, for an undisclosed sum. The two parties were previously equal partners in City Club at River Ranch LLC.

But that's only a fraction of the news coming out of the City Club at River Ranch. Lafayette restaurateur Jack Ainsworth is uprooting his successful Kaliste Saloom Road restaurant, Bella Figura, and moving it to the City Club ' perhaps as early as mid-March of this year. The Italian eatery is relocating its entire staff of 40 into a newly renovated City Club dining area that will be open to the public. "We'll have to expand the menu somewhat," Ainsworth says. "We're going to try to re-create [the Kaliste Saloom Road atmosphere], and make this look like it was born and bred in Florence."

The Bella Figura owner hopes his regular clientele follows him to River Ranch. "It's going to take a lot of marketing to let people know what we're doing is open to the public," says Ainsworth, who also has a snazzy Art Deco bar, Bella Notte, a few doors down from Bella Figura on Kaliste Saloom Road. "It's doing very well. That's going to remain open," he says.

The venture is a major undertaking for Ainsworth, who within two months of opening the new Bella Figura assumes the additional responsibility of managing a new members-only fine dining restaurant and bar that will also be carved out of the existing City Club dining space. That smaller concept, which has not yet been named, aims to be among the most upscale venues ever offered in Lafayette, on par with Mr. Lester's Steakhouse at Cypress Bayou Casino in Charenton, according to River Ranch's Daigle.

The City Club's current dining elements, the casual Basin Bar & Grill and upscale Café Lafayette ' which share the same menu ' have struggled to gain a foothold in this competitive market since opening four years ago. However, the banquet side of the business has done phenomenally well, and with the recent addition of veteran Lafayette caterer Joe Broussard, it's expanding to include off-site services.

Over the past couple of years, the club's owners have toyed with a variety of options for retooling the restaurant side of the business until finally settling on the new partnership with Ainsworth late last year. "We're setting up a new entity that the City Club will lease the food and beverage facility to, and that entity will be a joint venture between the City Club and Jack," Daigle says.

The project is on an ambitious time frame in an effort to lessen the impact of the renovations on the membership. Daigle is notifying the club's members of the changes ' which will cost about $500,000 ' in a letter early this week. He's anticipating that they'll respond favorably to the convenience of a casual restaurant with an established name as well as the exclusive nature of the members-only upscale concept. "We think the membership will be excited," he says.

Bella Figura will occupy the entire Basin Bar & Grill and the portion of Café Lafayette along the wall facing DeGaulle Square, where the outdoor events take place. The much-anticipated alfresco dining will be incorporated into Bella Figura. The Evangeline Room, which is accessible from the City Club's main entrance and also opens up to the Basin Bar & Grill, will be part of the Italian restaurant and will also be utilized for private dining and special events.

The fireplace in the formal dining room becomes the centerpiece of the new upscale seafood and steakhouse concept, and a members-only bar will be added to that space.

Ainsworth says he was first approached by Daigle about opening a small restaurant for homeowners and construction workers several years ago, when the traditional neighborhood development was still in its early stages. He told Daigle he had his hands full on Kaliste Saloom but that was only part of the reason he declined the overture. "I didn't know at that time River Ranch was going to be what it is now," Ainsworth says. The restaurateur says his own circumstances have changed, too ' after about eight years he's outgrown his 3,600-square-foot space on Kaliste Saloom. "The customers don't see it," he says, "but it's just overbearing [for the staff]." Last summer, when Ainsworth noticed River Ranch developers clearing land along the Vermilion River near the Camellia Boulevard bridge, he inquired with Daigle and learned that a riverfront development ' a boardwalk with high-end restaurant and retail ' was in the works. The proposed riverfront development piqued his interest in the TND, and he told Daigle he wanted a spot.

But Daigle and his partners instead proposed Ainsworth take over the City Club's dining facility, and this time Ainsworth was all ears. "It dovetailed with my thinking that we're maxed out here, that there's no growth opportunity for me," he says.

For a host of reasons, the City Club at Lafayette, started by B.I. Moody III and about a dozen prominent Acadiana business and community leaders in 1978, was dying a slow death in the years leading up to its move to River Ranch. From the top floor of the First National Bank building on Jefferson Street, its high-rolling atmosphere and Continental cuisine initially attracted an elite following of legal and business leaders; at one time the City Club held a popular Speaker's Forum, hosting prominent dignitaries, controversial figures and celebrities ' among the group former President Gerald Ford, Oliver North, F. Lee Bailey, G. Gordon Liddy and Rich Little. Oil was big in Lafayette, and the City Club was the place to be.

But the fall of the oil industry in the mid-80s brought considerable changes to Lafayette's social and business scenes. In the years that followed the oil bust, the City Club's timeworn atmosphere and prestige, along with its membership, began a downward spiral. Its struggles coincided with a trend that saw city clubs across the country losing their allure. Just as downtown Lafayette was endeavoring to reinvent itself, the Moody family ' rather than shutter the club ' decided to revamp the concept by expanding its offerings. After a couple of unsuccessful attempts to merge with or buy the now defunct Lafayette Townhouse Club on Auditorium Place (a site that's since been renovated into a restaurant and catering facility), the Moodys struck a deal with River Ranch's owners. The move brought new life to the antiquated club, skyrocketing membership from 600 to 3,000 thanks in large part to amenities like a spa, workout complex, tennis courts and a large swimming facility. The lone exception has been the dining element, which never caught on with much of the membership.

But the City Club partnership splintered for reasons unrelated to the operations of the club itself. "The bottom line is we never had a disagreement with Kevin [Moody, B.I.'s son who runs the family business] on the direction of City Club, and we made some big decisions, including decisions on replacing personnel," Daigle says.

Savoy, Daigle and Gagnard develop and retain ownership of a variety of projects within the TND, like The Crescent apartments, that award tenants access to the City Club's diverse offerings as part of their rent. With a host of new projects on the horizon ' a boutique hotel, an extended stay hotel, a new apartment complex and a senior living facility ' not to mention their new TND in Youngsville that will also have affiliations with the City Club ' the inequity of the partnership became more and more evident to both sides. "If we'd stayed co-owners," says Daigle, "it was going to result in a situation where we couldn't tie the City Club to some of these other assets."

"Kevin actually raised the issue with us first," Daigle continues. "He didn't say, 'We want out of this deal,' but he did say they'd have no problem selling."

Kevin Moody did not return a phone call for comment.

Several old guard Moody family employees have moved on since the relocation to River Ranch, including Gary Wilkerson, who was replaced as president when the club moved to River Ranch, and Ghassan Harb, who went to work for the City Club in 1980 and left in late 2005 to open Mazen's on Johnston Street. Other familiar faces, however, like chef Pat Breaux, sous chef Charles Thompson, assistant banquet manager Brian Edmonson and restaurant manager Susan Nickerson, have stayed on and will have jobs on Ainsworth's new team.

"They're not overstaffed there; what's there we'll need," notes Ainsworth, who does not anticipate any staff reductions or turnover.

"I think the transition will be seamless," Daigle says.