The candidates vying for District 44 state representative all bring a unique set of experiences in making their case to voters. 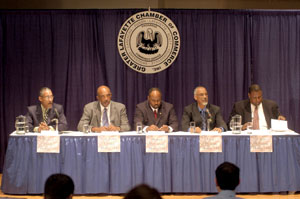 After watching a recent forum with the candidates for District 44 state representative, Wilfred Pierre was at ease. He was pleased to see all the candidates on stage show a command of the issues and a sincere eagerness to work for the people of the district.

"I think we have a great slate of qualified candidates," Pierre says of the five men vying to replace him in the state Legislature. "All of them are capable."

However, that doesn't mean the candidates are having a difficult time distinguishing themselves or that many voters are still undecided. "The distinctions are pretty clear," Pierre notes. "I think most people have already made up their minds."

For voters of District 44, which includes many of Lafayette's more established neighborhoods, as well as downtown, UL Lafayette and Girard Park, the state representative race has been shaping up for more than a year, with several well-known candidates in the race.

With different personalities and backgrounds, all five are playing off different strengths and experiences in making their case to voters. "The character of each of us and our careers have been so different that it makes it a little easier," says Prejean, "for the voters to choose."

"District 44 is unique," adds Williams. "It's the older part of the city for the most part. It's Oakbourne, it's Rufus Peck, it's Freetown. These are all established areas. Those are people that have been here for a number of years. They know politics and they know the situations. The undecided [voter] factor isn't as high."

A political veteran who has served 16 years as a city-parish councilman, Williams is one of the perceived frontrunners in the District 44 race. In his campaign, Williams boasts of helping reel in more than $300 million in capital projects to the north side through local government.

"At the end of the day, people want proven results," says Williams. "They want somebody that's going to go out and speak on behalf of District 44 and be assertive, and that's what I bring to the table."

Along with his accomplishments, Williams also carries the baggage of being a lightning rod for controversy while on the council. He riled several of his fellow councilmen by making racist accusations at public meetings and frequently complaining that the north side was not getting its fair share in capital projects, even though budget numbers often proved otherwise. Tension got so high in September 2006 that Williams was slapped with a $1,500 fine and a year's probation for writing "Dr. Martin Luther King Jr. Drive!" on the council desk in permanent marker. The incident came in the middle of the debate over re-naming Willow Street in honor of the slain civil rights leader.

Williams dismisses most of these disputes as "political," insisting that his overall record speaks for itself. "The proof is in the pudding," he says. "During my tenure on the council, the growth on the north side has been unprecedented. I can't think of anything that I've wanted to do that I haven't been able to get."

Williams' opponents are also touting an ability to get results, and emphasizing a better ability to work with others.

"I think [voters] see me as a mature person who goes about doing things in an appropriate manner," says Prejean, one of Williams' frequent critics. "Other candidates whose names I won't mention do a very good job of calling issues to the attention of people, and that's where it stops right there."

On the planning commission, Prejean has worked with several neighborhood organizations and earlier this year spearheaded an effort to develop a comprehensive land use plan for north Lafayette. "It's not just planning," Prejean says. "It's finding solutions to things and that's what I'd like to do in Baton Rouge." In addition to the primary issues of funding education and health care, Prejean says he also would be a voice for the environment and strengthening laws against discriminatory salaries for women. Prejean previously ran for the District 44 seat in 1991, collecting only 10 percent of the vote in a five-candidate race won by Pierre.

"I've had my eyes on this seat for quite some time," Prejean says.

So has Col. Terry Landry, a Vietnam veteran who helped develop security for the State Capitol. Landry was one of the first announced candidates in the race and has emphasized his ability to work with different groups from both political parties. Landry, who is registered as "no party," prides himself on being apolitical and resists any type of political labeling.

"I see myself as the most realistic candidate in the race," says Landry, who rejected several suggestions that he register as a Democrat before running. "Political gridlock is causing all kinds of problems in this country. I want to be accountable to the people and not to party bosses, and I'm passionate about that. I think that it takes some political courage."

Landry's grassroots campaign has been catching on with many voters. The retired law enforcement official is leading the pack in terms of fund raising, with a total of $31,798 in contributions as of Sept. 10. Perhaps more impressive is that Landry collected that money from 150 different donors, with several $10 and $15 contributors listed alongside big money supporters like Schilling Distributing Co.

"I've gotten an outpouring from people who have never been involved in politics before," Landry says. "People who are struggling every day. And that's part of what's been most gratifying for me."

Another strong grassroots campaigner in the race is Rickey Hardy, who last year easily won re-election to his third term on the school board. With his campaign slogan of "The Man for all the People," Hardy is banking on his reputation of being accessible and in touch with his constituents. "I answer my phone, and I return my calls," Hardy says. "I'm a blue-collar, six day-a-week working man who understands the needs of the working class, and I'll be a full-time, seven day-a-week representative."

Known for his often colorful comments, Hardy provided the most creative answer of the night at a recent forum between the candidates. Asked how to handle a shortfall in funds for new roads, Hardy responded, "We need to have a statewide boucherie with all the pigs in the pork barrel. Once the pork barrel is gone, there won't be any shortfall. Just a lot of cracklins for everyone."

With Hardy, Williams, Landry and Prejean all carrying strong name recognition, the biggest long shot in the race is attorney Derriel McCorvey. Originally from Florida, McCorvey has lived in Lafayette since 1998. A former All-SEC strong safety for LSU, McCorvey is president of the LSUL club for alumni athletes. He also hosts the weekly "Ask a Lawyer" program on KJCB. McCorvey has branded himself a socially conservative Democrat who will take a business-minded approach to Baton Rouge.

"People are tired of politicians," he says. "I think when you get incumbents who get elected like Mr. Pierre was, over and over without opposition, you don't get fresh ideas and you don't get the hunger from a candidate to serve the public."

McCorvey, who went through a bitter divorce with former Opelousas Police Chief Larry Caillier's daughter, also says he wants to fight to bring more parity to family law in the state. "We've got to do something to take the financial incentive out of being designated the domiciliary parent under our current laws," he says. "A woman that's designated domiciliary parent, she gets child support regardless of how much time the father gets with the kids."

With five qualified contenders, many political observers say the race will come down to which candidate gets out the vote on election day. District 44 has historically seen low turnouts (only 28 percent in last year's election on two new sales tax issues), and with no overwhelming favorite Democratic governor's candidate and no city-parish president or sheriff's race, the candidates are banking on their race being one of prime interest. "I think the District 44 race is a race that will energize people to go and vote," says Williams. "You have a lot of people running, and everyone's going to get out their base. With the interest that I'm seeing out there, people are really going to go out to participate."