At the New Orleans Jazz & Heritage Festival, Russ Lay, a friend from my Kellam High School days in Virginia Beach, Va., wrote the following on Facebook: "Yvette Landry...real honky tonk music." I wrote and asked him to tell her hi. He responded with: "She is really good."

Wednesday, May 9, 2012
Written by Dominick Cross 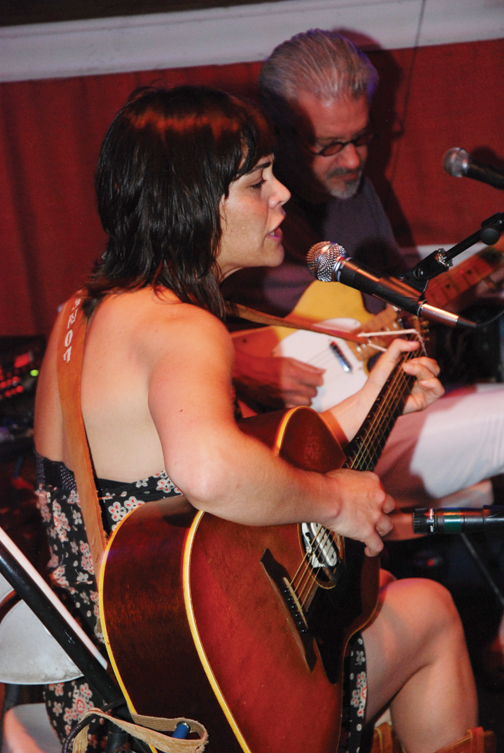 At the New Orleans Jazz & Heritage Festival, Russ Lay, a friend from my Kellam High School days in Virginia Beach, Va., wrote the following on Facebook: "Yvette Landry...real honky tonk music." I wrote and asked him to tell her hi. He responded with: "She is really good."

Anna Laura Edminston, she of Feufollet fame and any other band she sits in with, says her cousin, Miss Louisiana's Erin Edmiston, is making a run for Miss USA. Erin Edminston, is an active volunteer for Miles Perret Cancer Services in Lafayette and a proud donor for St. Jude Children's Research Hospital.

A music video of Nilsson's Don't Forget Me by Brass Bed is causing quite the stir lately. Brass Bed played the New Orleans Jazz & Heritage Festival, have released an EP of Nilsson covers entitled On Nilsson.

Donnie and the Pooldoos hosted another Pooldoo Party at Nunu's in Arnaudville Saturday. Because Phil Kaelin and Blake Castille hit the road with Hadley J. Castille and the Sharecroppers, special guests were on hand in the form of Mark Trichka and Lisa Brande visiting from Putney, Vt., on guitar and fiddle, and ace musician Lee Tedrow on bass.

The Gary Granger Project has a May 12 date at Cite des Arts, 109 Vine St., Lafayette. Music begins at 7 p.m. and  the band consists of guitarist Gary Granger, violinist Beau Thomas, bassist Josef Butts, drummer Jermaine Prejean and vocalist Mike Lejeune. The music will include jazz and blues standards and include some killer bluegrass fiddling by Beau.

Tipitina's Foundation has partnered with Let's Be Totally Clear to host four concerts in May to raise awareness and show support for a 100 percent smoke-free Louisiana.
May 5 New Orleans - Ani Difranco at Tipitina's
May 11 Baton Rouge - Heartless Bastards at Spanish Moon
May 18 Lafayette - ImagineIAM at Artmosphere
May 31 Shreveport - Buddy Flett and David Egan at Club Status
The concert series will highlight the importance of smoke-free workplaces in each city where there is a Tipitina's Music Office Co-Op. They will feature giveaways and music by internationally known artists, Grammy winners, and local supporters of the cause.

Johanna Divine sightings will be becoming rare as she plans to spend her summer overseas in Ireland and France on a duo gig with Mo O'Connor. She paired up with Sam Broussard in an acoustic set at the Blue Moon Thursday which was followed by a sneak preview of her latest album, Electric Tide (the fine artwork is by Denise Gallagher) with Joseph Butts, bass; Roy Durand, drums, Andrew Toups, keyboard and Josh LeBlanc, trumpet.

Speaking of overseas, Steve Riley & the Mamou Playboys head to Chelyabinsk, a federal subject of Asiatic Russia, according to Wikipedia.

Keep an ear out for a release by Thornton & the Thoroughbreds secretly recorded in Opelousas and set to be mixed in Colorado. The band consists of Matt Thornton, guitar/vocals; David Mazat, drums; and bassist Jumpin' Geoff Thistlethwaite who describes the band's music as "Cow Punk." The as of yet titled release has guests Chris Stafford, Mark Meaux, Chris French, Corey Duplechain and Earl "Washboard" Salley.

Country music's Carrie Underwood announced on Good Morning America recently while promoting her new album, Blown Away, that she will launch a North American arena tour this fall called "The Blown Away Tour."  Breaux Bridge's Hunter Hayes, billed as the special guest, will open for Underwood. The tour will also include an international run of shows, including Underwood's first-ever United Kingdom concert taking place at the prestigious Royal Albert Hall in London on June 21.

Royal Teeth signed with Dangerbird Records. Next up for the band is an extensive U.S. tour, playing dates with The Kooks and now labelmates Fitz and the Tantrums. Here in Lafayette, the band will close out the Spring season of Downtown Alive! with Rareluth on June 1.
haarp, the purveyors of dynamically slow heavy metal from the South, will kickoff their tour with legendary (and fellow) New Orleans heavy metal band DOWN, May 18, at The Station in Broussard and return to the area June 2 at The Wild Salmon in Lafayette. haarp won the Big Easy Music Awards last month as the Best Hard Rock/Heavy Metal act of 2011.
The new haarp record, produced by Philip H. Anselmo, is currently in the mixing stages and will be released this summer on Housecore Records. The record is currently untitled.

Michael Juan Nunez and The American Electric's My Little Train Wreck is also out.

Send Off the Record news to [email protected]