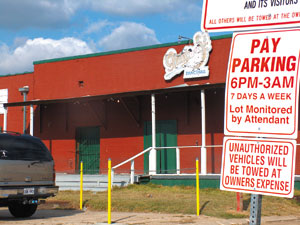 Two weeks ago, Grant Street Dancehall owner Don Kight got a phone call from his daughter, who was watching workers erect a chain fence around the front parking lot where their customers have always parked.

"She said, 'Do you know anything about them putting up a fence?'" Kight says. "It was out of the blue. I was surprised, but not much more than that because I had no recourse. I had been expecting it for a while."

Grant Street Dancehall has never owned or leased the parking lots surrounding the club, but has always operated with a tacit agreement that allowed its customers free access to the lots. Kight, who is in his third year as owner of Grant Street Dancehall, says he tried in the past to buy or lease the lot in front of his building from its owner, New Orleans real estate firm Historic Restoration Inc.

"We had numerous phone calls," says Kight. "Prices were discussed, but there was no response from them whether that was acceptable or not. The negotiation process never started."

Instead, HRI leased the lot to Guamas Restaurant, and Kight's hands were tied when security officers hired by Guamas began charging customers $5 to park in the lot in front of Grant Street. In addition, two adjacent lots where Grant Street customers traditionally park have been leased by 307 Downtown, which is also charging $5 parking fees.

For Kight, the parking situation is the latest in a series of challenges with his downtown venue that have him actively seeking new locations for the legendary live-music nightclub. "There are certainly issues for me to consider," he says. "Everything from parking, relationship with the landlord ... Everything is difficult, and I don't know how it's going to turn out."

Barring an unforeseen turn of events, Kight says that by the end of the year, Grant Street Dancehall ' a staple of downtown Lafayette for the past 25 years ' will move off the street that gave it its name and out of downtown.

At its current home in the old brick building at the corner of the Jefferson Street underpass, Grant Street has hosted music icons such as Muddy Waters, Ray Charles and Stevie Ray Vaughan and served as a home base for local acts like Sonny Landreth, who played the venue's opening night with zydeco king Clifton Chenier on July 4, 1980.

Kight declined to say whether his landlord, Garden Properties, was raising the cost of his lease, which comes up in January. He says other issues facing the club include the ongoing repair needs of the 80-year-old building and increased transient crime downtown ' a problem that has resulted in the club's employees and musical acts having their cars burglarized.

307 Downtown co-owner Robert Guercio says as downtown has grown, parking on the lower end of Jefferson Street has become more limited and less secure ' a trend that made him actively pursue leasing lots. Lemoine Co. and CA Guitars own the lots adjacent to Grant Street that Guercio is now leasing.

"I have way too much money invested in my business to not have any parking available for my customers," he says. "If I provide parking, I can continue to have the customers that I do have, plus add new customers."

Guercio has followed the lead of Tsunami's downtown restaurant, which has its own parking lot for customers. Customers of 307 Downtown who use the club's two Cypress Street lots can redeem the $5 parking charge at the door. In the future, Guercio says the club may offer valet parking for certain events.

Meanwhile, Kight says he can no longer guarantee parking for his customers.

"If they decide to close those lots off, where are [Grant Street customers] going to park?" he asks. Lately, he says Grant Street patrons have been seeking out spots further past the railroad tracks toward Evangeline Thruway, which has resulted in even more car burglaries and double parking.

Besides parking issues, Kight says the complexion of downtown has changed, and his business was at one of its all-time lows this past summer. If he moves the club, he hasn't decided whether he will keep the Grant Street name.

"It's certainly possible to name something Grant Street that's not on Grant Street," he says. "Is it possible to translate that into the same vibe? I don't know, and that's my biggest concern. Grant Street to me is live music, comfort for the customers and prestige for the musicians. It's got to fulfill all of those, and sometimes things have to be modified to make that happen."