On a day off from the Vans Warped Tour, 400 volunteers rolled into Cameron Parish to lend a hand to residents still devastated by Hurricane Rita. 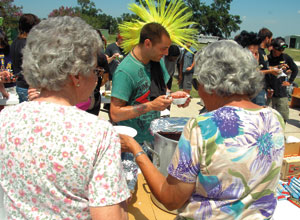 Tina Wolfe was shocked by the sight of the volunteers. "What did we get ourselves into?" she thought.

On June 29, half a dozen tour buses from the Vans Warped Tour rolled into Lake Charles and unloaded 400 of its crew and band members at the Burton Coliseum. The rag tag army sported mohawks and eyeliner, as musical groups like NOFX, The Bouncing Souls and Anti-Flag spent a day off from the tour braving abundant mosquitoes and blazing heat at 20 different sites throughout Cameron Parish.

"They had tattoos everywhere, piercings, spiked hair," Wolfe says, "but they were the nicest people we've ever seen. The last thing you think about is rock bands coming down here to clean up. They were hard workers. They got out there, and they worked as a team. There were no conflicts at all from anybody. We had people passing by on the road hollering out the window, 'Thank you!'"

Vans Warped Tour producer Kevin Lyman hatched the plan last year after hurricanes Katrina and Rita. "I just got this idea," he says, "to route [the tour] through, take a day off between Atlanta and Houston and see if we can help. Unfortunately, the gut feeling in my stomach was that these people were still going to need a lot of help down there. I didn't realize how much they would need."

The Vans Warped Tour features hard-rockin', punk-infused music from groups like Helmet, The Casualties and Joan Jett and the Blackhearts and includes side attractions like skateboarding exhibitions aimed at teenagers. The tour has hit the road every summer since 1995. In 60 days, it sets up camp in 50 different cities. "It's the longest running traveling music festival in North America," Lyman says. The tour employs 800 people and has already sold 600,000 tickets this year alone.

"We had a very successful year last year as a tour," Lyman says. In the aftermath of both hurricanes, the Warped Tour cut a check to Habitat for Humanity for $300,000. Lyman also formed an organization called Unite the United and raised an additional $45,000 by selling merchandise through online auctions at www.unitetheunited.com. He plans to develop the foundation and strategy for future disaster relief efforts.

Lyman tried to take his group's efforts even a step further but ran into resistance from Habitat for Humanity. "The Habitat people really couldn't figure out how to use us," he says, "and I was like, 'That's not a good enough answer for me.' They were kind of giving me the runaround on this volunteer thing." Online, Lyman found the Volunteer Center of Southwest Louisiana in Lake Charles.

Executive Director Beverly McCormick put the group in contact with the Cameron Council on Aging, where Wolfe works as a data processor. "Imagine if back in the '60s if Elvis Presley, The Beatles and The Rolling Stones came to volunteer with all their band members and their support team," McCormick says. "I think there was a lot of apprehension at first about the group of young people coming in, being band members and artists with these different groups, with tattoos and piercings in their ears or nose or others parts of their body. But the people in Cameron fell in love with them when they saw how hard they worked. They were very polite, hard working and kind. One lady told me, 'These boys are nice. They're really, really good boys.'"

Lyman says it wasn't hard choosing to help out in Cameron as opposed to New Orleans, which tends to garner more of the media spotlight. "To be 100 percent honest," he says, "the people [of Cameron Parish] seemed the most excited about having us come. Right away they said, 'You know what, we'll make it work.' They didn't ask us what color our hair was, what our political or religious views were. They just said, 'we can use the help.'"

Lyman even brought his wife and two daughters to help out. "The almost universal reaction from our crew was, 'Wow, it's been almost a year, and these people are still trying to clean their lots,'" he says. "I had a couple of my guys come up to me afterwards and say that they thought the whole thing was a little weird, that the lots could have been cleared with a bulldozer. I said, 'That's the thing. Our government should have had a bulldozer go and clear that land for them. But they haven't, so we did it for them.' If they had gotten these people some bulldozers and some help, they would get themselves back on their feet. You could tell they were hard working people; they're not used to having anything handed to them."

Wolfe, a lifelong Cameron resident, says it's been hard to find helping hands. Before Rita, she had lived her entire life in the house built by her father. "You could sit on my front porch and listen to the waves hit the beach," she says. "It was peaceful. We have nothing but house blocks left. It took my dad 24 years to build that house, and it was wiped away overnight. It's hard." Wolfe now lives in a 250-square-foot trailer behind her uncle's house in Grand Lake. "It's taking some adjusting to get used to," she adds.

Wolfe's grateful for the generosity shown by the members of the Warped Tour. "They took time out of their schedule to help us out," she says. "We've had the door slammed in our faces so many times by different agencies and governmental bodies. There's a bunch of people that are getting denied, and it's not their fault. They're not getting help like they need to."

The experience was just as beneficial for Lyman and his crew. "A lot of people came up to me and said it was really enlightening. You can't make sense of it watching it on TV. If 10 people that worked for me, if that actually changed something in their life, then that's great."

And although it was only a day-long event, volunteers also got a genuine taste of south Louisiana hospitality. Members of the tour barbecued with Cameron residents, and some imbibed local moonshine. "What you find out is that there's not much difference in people," Lyman says. "A woman that was in her 80s said, 'No one could have told me that in my life something would change at this point, but my views of these people, with the piercings and the tattoos, has always been bad, and now I have a great opinion of them.' That's pretty cool."