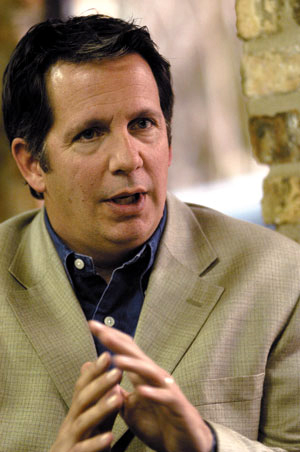 Lafayette state Rep. Joel Robideaux admits that debating the nuances of telecommunications law isn't exactly his forte. But that isn't stopping the 43-year-old Cajun from challenging two of the state's most powerful companies, Cox Communications and BellSouth, on industry regulations.

"I feel a bit like the guy that's studying for a final when he hasn't been to class in about two months," Robideaux jokingly says.

A calm, unassuming CPA with slicked-back dark hair, Robideaux has been a behind the scenes proponent of Lafayette Utilities System's controversial fiber-to-the-home project since he was first elected to the Legislature in 2003. But now the first-term legislator is front and center in the ongoing saga to allow LUS to directly compete with Cox and BellSouth by selling its own phone, Internet and cable service.

Two weeks ago, Robideaux pre-filed three bills that throw down the gauntlet to LUS' opposition. The bills not only seek to clear the way for LUS' project, but also to broaden other municipalities' right to develop their own telecommunications infrastructure.

"We don't mind competing," she says. "We just like a level playing field. We're fine with the law as it is now. We believe that everybody needs to play by the rules. I don't know what their issues are. Nobody's come to us directly."

Robideaux nonchalantly insists he's only acting in the interests of City-Parish President Joey Durel and Lafayette Utilities System Director Terry Huval, and he expects the entire Lafayette delegation to line up behind the bills.

"As a legislator," he says, "when we're asked to do something to benefit the city, there's only a few of us that can handle the legislation. As it stands, right now I'm just the one that's handling the bills for the administration."

But Robideaux's also not shy about taking a spokesman's role on the issue.

"You know it's going to be a battle," he says, recognizing that his bills will attract fierce opposition from Cox, BellSouth and a stable of telecom industry lobbyists. "But I feel like we're Lafayette, La. Whatever we do here and whatever we're able to accomplish is not going to shut BellSouth down. BellSouth's going to fight it because they need to fight it, and I understand they have to answer to their shareholders. But this is good for Lafayette, so we're going to try to accomplish what we set out to do and let the chips fall where they may."

Passed in 2004, the 21-page law was touted as a compromise agreement between LUS and private telecom providers, enacting detailed guidelines and scrutiny over any public entity's bid to offer telecommunications services to the general public. Last year, BellSouth used the law to file a lawsuit that tied up LUS' bond ordinance in court. LUS and city leaders felt burned, claiming BellSouth was underhanded about its intentions during the bill's negotiations. BellSouth Rep. John Williams did not return calls for comment for this story.

"It's a very restrictive bill," Robideaux says. "I'm not a lawyer, but the way I read it, it basically gives BellSouth or any telecommunications company the ability to sue at every turn. I'm just not so sure that it's meant to be anything other than a device to go to court."

Kleinpeter says Cox is firmly opposed to repealing any or all of the Fair Competition Act and suggests such a move could stifle economic development in the state. "If that law is repealed, local government is going to get a sweetheart deal that will discourage future investment from the private sector, the engine of economic development."

Another bill, HB 244, would require any private telecommunications company that receives public funds to adhere to all of the regulations in the Local Government Fair Competition Act. Telecom companies have received government assistance in the past, in the form of tax incentives and grants for opening new offices and expanding services into rural areas. Robideaux won't be surprised if BellSouth or Cox look to capitalize on federal funds or tax incentives now being offered to spark rebuilding in the wake of hurricanes Katrina and Rita.

"If they see this as an opportunity to put down some infrastructure in the state, which is not necessarily a bad thing, [under this bill] they would then be subjected to the same rules and regulations that any other governmental entity would be, since they're receiving government money to do it," says Robideaux.

While Robideaux lays it out as a common sense measure, the bill appears to be a long shot. If enacted, it would open the door to placing unprecedented government auditing and financing restraints on private telecom companies. Cox's Kleinpeter says public and private businesses are different animals that can't be covered by blanket guidelines.

"I think you're comparing apples and oranges, and those two things could not ever be put in the same basket," she says. "All of us in business have to follow rules and guidelines from the FCC, the SEC and anti-trust laws."

Robideaux's third bill, HB 257, would make Lafayette completely exempt from the Fair Competition Act. It would also exempt municipal wireless Internet networks, such as the one New Orleans started as a free service following Hurricane Katrina. And it would exempt disaster-affected areas from the law for a period of five years.

Robideaux insists all of these bills are a means of encouraging infrastructure development during a critical rebuilding period in south Louisiana.

The triple-threat political gambit could not come at a more auspicious time for LUS. Last Wednesday, the city-parish council approved the public utility's latest bond ordinance for the project, starting a 30-day window for anyone to issue another legal challenge to the bond ordinance. The benefit of having a fresh debate on the Fair Competition Act opening at the same time as the window for a new legal challenge to LUS isn't lost on Robideaux, who smiles and says, "It just happened to work out that way."

Registered independent Robideaux says a lot of lawmakers have been emboldened by the recent hurricanes to rethink progress in the state. He hopes this may give his bills a fighting chance.

"The hurricane changed a whole lot of things about the need for rebuilding and infrastructure in certain areas. The landscape is completely different for the south part of Louisiana than it was back then. What if Erath wants to do wireless, and they want to be able do some things, maybe get some of this Go Zone money? The whole need to rebuild is completely different."

The bills prompted the scheduling of a pre-session meeting with all interested parties to talk about possible compromises ' a meeting that was abruptly canceled late last week. Even before that development, Robideaux wasn't holding out too much hope that everyone would come to a friendly agreement.

"They had these meetings before the [Local Government Fair Competition Act], and Lafayette thought it would be allowed to progress, and that wasn't the case. So I'm not sure what could come out of this meeting that everybody would feel like, 'OK, good, we know exactly what's going to happen after this point.' But, I'm an optimist, so we'll see."