The magazine ranked all 398 current metropolitan statistical areas based on employment data from the Bureau of Labor Statistics from November 2000 through January 2012. Rankings are based on recent growth trends, mid-term growth, long-term growth and the region's momentum. Forbes also broke down rankings by size, noting that regional economies differ markedly due to their scale. 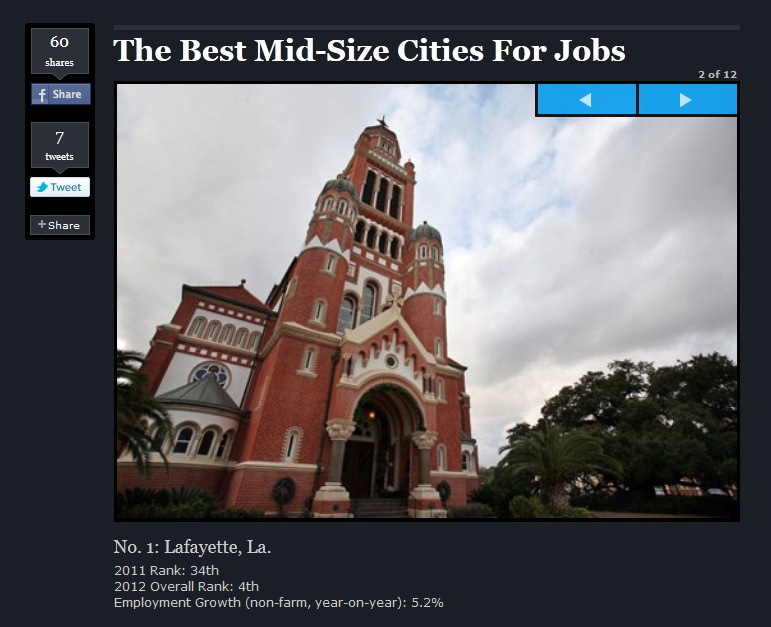 Forbes' recent ranking has Lafayette the top mid-city for job growth and No. 4 overall.

For the mid-size cities list that Lafayette topped, it ranked the 91 MSAs that each have employment rolls between 150,000 and 450,000.

According to the respected business pub:

Instead of government, the big drivers of growth now appear to be three basic sectors: energy, technology and, most welcome all, manufacturing. Energy-rich Texas cities dominate our list - the state has added some 200,000 generally high-paying oil and gas jobs over the past decade - but Texas is also leading in industrial job growth, technology and services. In first place in our ranking of the 65 largest metropolitan areas is Austin, which has logged strong growth in manufacturing, technology-related employment and business services. Houston places second, Fort Worth fourth, and Dallas-Plano-Irving sixth. Another energy capital, Oklahoma City, ranks 10th, while resurgent New Orleans-Metairie places 13th among the largest metro areas.

In other positive economic news for Lafayette this month, the Bureau of Economic Analysis' latest figures reveal that Lafayette Parish's per capita income in 2010 was $43,733 - an increase of $1,402 or 3.3 percent for every resident in the parish.

Lafayette Parish is ranked in the top 9 percent of all parishes and counties in the U.S. - 282 out of 3,138 - putting the community near the top of a list that many site selectors, business professionals and entrepreneurs study.

"Per capita income is a significant measurement of the quality of our economy. By measuring the community's affluence, PCI serves as an important tool in LEDA's business attraction efforts," Gregg Gothreaux, president and CEO of the Lafayette Economic Development Authority, says of the increase. "With an affluent population, Lafayette has a greater ability to attract high-end retailers, develop a broad spectrum of housing options and maintain the variety of goods and services already in place in the community."

Also, a study released in February by Sentier Research and published in the Wall Street Journal noted that the Lafayette MSA saw the largest increase in median annual household income between 2005 and 2010. Household income in the MSA increased 12.2 percent, rising to $47,000.

Read more about Lafayette's economy in the next issue of ABiz May 31, where we will recap Gothreaux's State of the Economy presentation and discuss in detail Lafayette's Economic Performance Index.