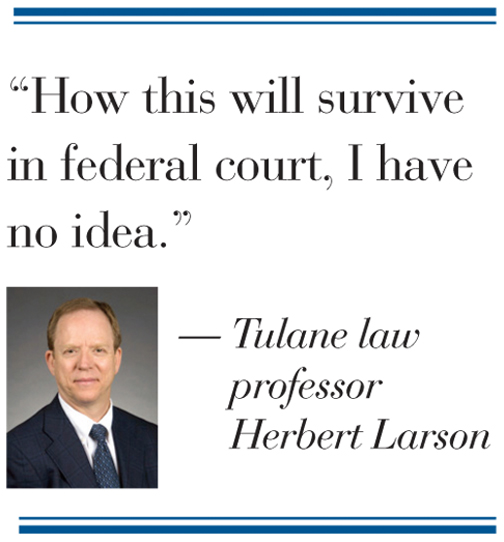 Since her 2005 arrest on dozens of counts of forgery and theft by fraud - charges of which she was acquitted in a 2009 bench trial - residential decorator Judy Lyons has had a pretty solid batting average against the powerful oil-patch family she accuses of dragging her name through the mud and her health into the gutter. And U.S. District Court Judge Richard Haik has given a legal green light to Lyons' ongoing quest for justice and, if she prevails, what will no doubt be a sizeable payday either in the form of a jury award or a settlement with Knight Oil Tools and its eponymous clan.

Haik recently let stand a lawsuit Lyons filed against the Knights - Mark, the family scion and company president, his mother Ann, and his sister Kelley Knight Sobiesk - seeking damages for defamation, loss of income and other claims.

Lyons originally filed the suit against the Knights and their company in state district court in Lafayette in early 2011. Judge Marilyn Castle sided with the Knights and dismissed the suit, but the 3rd Circuit Court of Appeal reversed Castle's ruling. In October of last year, the Knights successfully petitioned the state court to transfer the suit to federal court because Lyons' suit brought a RICO claim against the family. Named for the Racketeer Influenced and Corrupt Organizations Act, a law enacted in 1970 to help the federal government better prosecute organized crime, a RICO claim can be brought against individuals or corporations that work with law enforcement to bring, as Lyons' alleges and her criminal acquittal supports, false charges against an individual.

"It's interesting with RICO," says attorney Tim Basden of Breaud & Meyers, the firm representing Lyons. "You can't just simply imagine that racketeering laws are solely applicable to gangsters - they're not. And there's no allegation that the Knights are gangsters - that's not it at all."

But Herbert Larson, a Tulane law professor with expertise in federal RICO cases who reviewed the suit for ABiz, doesn't think the RICO gambit stands a chance going forward: "In my opinion, first, this does not state a claim under which relief can be granted under civil RICO; it doesn't set forth any of the seven or eight elements of civil RICO that you need to establish; it doesn't allege a pattern of racketeering activity; it doesn't, in fact, allege any racketeering acts; it fails to set forth any predicate offenses; it doesn't adequately define the enterprise and on and on and on - it doesn't even allege jurisdiction.

"How this will survive in federal court, I have no idea."

Yet on May 11 at federal court in Lafayette, Haik agreed that Lyons had "sufficiently pled grounds for maintaining a RICO claim."

ABiz first reported on Lyons and her battles with the Knights a year ago in a cover story titled "Dark Knights" after Lyons won an appeal in the case.

According to her suit against the Knights, Lyons was hired by matriarch Ann Knight and her daughter, Kelly, to do interior design work in the Knights' primary homes and other residences, but in an attempt to conceal the work from company president Mark Knight, the Knight women had Lyons alter invoices to make it appear as though the work was being done for the company and not for private residences. Between 2002 and 2005 Lyons' bills to Knight Oil Tools totaled more than $600,000. When Mark discovered the subterfuge in 2005, the family filed a criminal complaint against Lyons, which led to her arrest.

Lyons spent five days in the Lafayette Parish Correctional Center, her reputation in the community sullied and her financial resources and health on the verge of collapse due to hiring lawyers on the one hand and stress on the other.

The Knights also filed a civil suit against Lyons seeking to recover the $640,305.92 they claimed she stole by forging checks and submitting fake invoices, but after Lyons' acquittal in the 2009 criminal trial, the family let the civil suit expire.

In the meantime, Lyons went after the Knights in state court, a case that was transferred to federal court at the Knights' request.

Lyons told ABiz in May 2011 that the arrest and ensuing court action had a detrimental effect on both her physical and emotional health, not to mention her finances: "Up until about eight months ago I wouldn't have been able to carry on a conversation with you. It just devastated me," she said at the time. "But I talked to a whole lot of people and got a lot of help. With the support of my friends and my family and people that believed in me, I made it."

Tulane's Larson says a civil RICO suit is virtually identical to the criminal variety a federal prosecutor would bring, but he adds that the chance of any criminal repercussions for the Knight family is "highly unlikely," even if Lyons prevails on the civil side.

Basden, Lyons' attorney, declined a sit-down interview between ABiz and his client for this story, and an attorney for the Knights declined comment. No trial date is set.