City-Parish President Joey Durel won election as a political outsider, but a holiday fundraiser is lining up high-profile supporters for his re-election campaign. 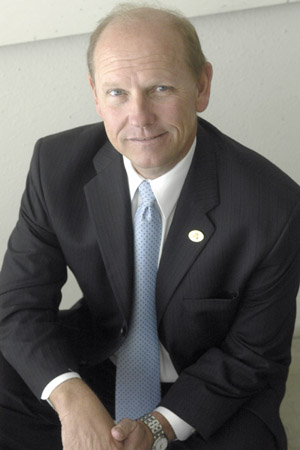 If your nerves are already frayed by holiday traffic, you may want to avoid West Bayou Parkway on Thursday night, Dec. 14. Four sheriff's officers will be out directing vehicles, and two Acadiana Transit buses will also be circulating through the neighborhood to deliver an estimated 1,000 people to and from several designated parking areas. Helicopters and a motorcade sound like the only things missing from Lafayette attorney Glenn Armentor's holiday fund-raiser for City-Parish President Joey Durel.

"The event has kind of taken on a life of its own," says Armentor. "I don't know that something quite like this has been done before."

The event, dubbed the "No-Party Party," is novel considering that Armentor and several other local prominent Democrats publicly embraced Durel, a Republican. Armentor has received flak from some fellow members of the Lafayette Parish Democratic Executive Committee for holding the event, but says "99 percent" of the feedback he's gotten has been positive. "[Durel]'s extremely popular," says Armentor. "Almost everybody who found out about the event had very positive things to say."

Armentor mailed invites to 2,400 people, along with a letter in which he declared, "Durel may well be the best mayor our town has had." The event could draw up to 1,000 people, though Armentor would only say that he expects the crowd to match that of the last big fund-raiser held at his home ' a party in honor of former Democratic Rep. Chris John that drew 600 people.

The event promises to pull in an estimated $100,000 for the Durel campaign which, nearly 11 months away from the election, is already off to an impressive start. At the start of 2006, Durel reported having $15,339 in his campaign fund. But money for his 2007 re-election bid didn't really start coming in until this fall, with two successful Durel fund-raisers ' a golf tournament at The Farm and a dinner party at the City Club at River Ranch.

While Durel wouldn't give specifics on his campaign fund, he says, "With this fund-raiser, I'd say we're going to be in pretty good shape. I'm probably going to finish the year with as much money as I ran my entire campaign with last time."

That would put Durel's campaign arsenal at around $400,000 going into 2007. In 2003, the Durel campaign spent approximately $375,000 throughout the 2003 city-parish president's race, which went to a November runoff election. In that race, Durel didn't raise his first dollar until January 2003, 10 months before the primary election.

"Once you're in there," Durel says, "it's a little different than when you are a political outsider and unknown."

Durel, who based his last campaign on being a political outsider with a fresh perspective, says that while the circumstances around him have changed, he still has the same approach to his job.

"There's no doubt I'm more political now than I was three years ago," Durel says. "But I still think I approach everything in a business-like manner, and the reality, unfortunately, of the world in which I find myself now is that it takes dollars to run a campaign.

"People are going to have their own views," he continues, "based on what information they have, however they get that information, but I don't think anybody will deny that what I set out to do is what we're still striving to do, and that is bringing people together to move the community forward."

Since taking office, Durel has made being publicly accessible a priority. He started a weekly radio show, a monthly "coffee with the mayor," and makes it a point to attend all major local events and regularly meet with many community groups.

Armentor, who supported Durel's Democratic opponent, Glenn Weber, in the 2003 election, says Durel won him over through his hard work and dedication to the job. "He probably works 80 to 90 hours a week," Armentor says. "I've been watching him. He's the only politician I know who outworks me."

Armentor has no intention of switching parties. "I'll always be a staunch Democrat," he says. "But I'm not a Democrat who's going to be against all things Republican. If somebody's doing the right thing as a Republican, I don't want to squander the influence of the Democrats right now by taking the position that only Democrats can do good and Republicans can't."

Frank Flynn, chairman of the Lafayette Parish Democratic Executive Committee, has a different take on Durel. He isn't convinced that Durel has actively involved the entire community in his decisions. As evidence, he points to the Nov. 7 election in which voters overwhelmingly shot down a sales tax initiative that was heavily pushed by Durel.

"If we take the last poll that was taken," Flynn says, "with reference to the last initiative of the Durel administration, the Democrats and the Republicans aren't happy. That's not an indictment of his entire administration. I mean the latest sampling of the pulse of the community is not favorable. That should be crystal clear."

In response to Armentor's "no-party party," Flynn also notes that the Democratic parish executive committee will likely issue a "statement of principle" at its next meeting declaring that its members should not publicly endorse or raise funds for Republican candidates. Flynn says as a member of the local Democratic leadership, Armentor should refrain from being so public with his support for a Republican ' even though no Democrat has surfaced to challenge Durel in the 2007 city-parish president's race.

Armentor doubts anyone will. "I really don't think he's going to have opposition," he says. "I mean, I've heard of nobody who's interested in running."

Armentor says that the most obvious candidate, Glenn Weber, who lost a close race to Durel in 2003, isn't interested in running again. Weber did not return calls for comment.

"I don't see Glenn Weber running, and I don't see anybody else on the horizon who is talking seriously about it," Armentor says. "We're one year out [from the election]. Frankly, this is the kind of race that you've got to start early. So, if Joey Durel has opposition next year, it'll be token opposition. I don't think anybody with real stature is going to stand up and run against Joey Durel."