If it didn't read UPS' on the door, you'd think Danny Landry had launched this family-friendly shipping concept himself.
By Dominick Cross

A pair of dollies greet you at the entrance of The UPS Store and you're serenaded by Creedence Clearwater Revival as the automatic doors obligingly open at just the hint of your presence. 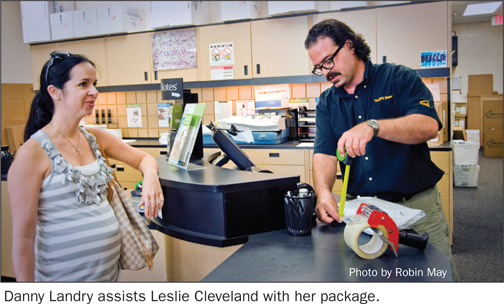 As you walk in, on your right is a tall box in July Fourth wrapping paper that will accept items for the troops. There are two plaques of appreciation from the 2nd Battalion/402nd Army Field Support Brigade on a nearby wall.

At the center counter, you can treat yourself to fresh coffee and on this particular day, a slice of Red Velvet Cake. At one of the work stations a sign reads: "CUSTOMERS: We have actually worked this computer to DEATH! This station is temporarily unavailable. Please excuse the inconvenience!"

So far at this UPS Store, you've encountered perks, patriotism and personality, due to the guy at another computer, an easy going Danny Landry, who with his goatee and dark curly hair looks more like one of the Three Musketeers than the owner of The UPS Store. But not to worry, all of the trappings of a retail shipping, postal and business service center are available in this corner of the Landry family-owned South College Shopping Center.

The difference is Landry offers a level of family-friendly customer service you don't typically expect from a franchise store. In other words, he makes the most of the few minutes he typically gets to spend with his customers.

"Best entertainment money can buy," Landry says to the mother of a 4-year-old as he hands the child a sheet of bubble-wrap.

Landry knows people are busy, and he aims to serve them as quickly as he can. "We want our customers to come in, do their business and leave," he says. But if customers aren't in a rush, Landry doesn't mind them lingering. "They're welcome to stay as long as they want; as you can see we have Red Velvet Cake out there today.

"But I don't want them to feel like they're sitting in line, no one cares about them, taking forever to get their package packed. No, we want them in and their business taken care of to where they can get on with their day."

By his own account, Landry became an unlikely owner of the business.

"As a kid growing up, I hated the business. I wanted nothing to do with it because it seemed like it was slow and it didn't involve any kind of digging in the dirt and getting dirty," says Landry, who kept that attitude through high school and college at New Mexico Institute of Mining and Technology. "I took a degree in mining engineering," he says. "So my plans were vastly different."

Like most plans, life and fate have a way of shifting things around. Landry says he started the process of going back to school in Arkansas for a master's degree in social work and "while on that track, I also got a certification in massage therapy. So that was my first reinvention." It would be one of a couple more.

Right after Hurricane Katrina, in September 2005, Landry returned home. He continued to dodge the family packing and shipping business, instead taking a job waiting tables at what was then the Boulevard Grille in the Oil Center, another occupation he initially sought to avoid.

"But I tried it and absolutely loved it," says Landry. "The pace, the fact that you're serving someone, you get in, get out; work with your hands, so to speak, and work directly with people. At the end of the day, that really appealed to me."

By November of that year, business at The UPS Store was picking up because of the influx of Katrina evacuees and Landry got the call that put him on his current - and likely permanent - career path. He went to training in San Diego, returned and decided to buy his uncle's portion of the store. The location originally opened as a Mail Boxes Etc. in 1994 under the care of Landry's father and uncle, David and Stephen Landry, respectively.

"You can get a package packed and ship at about eight different places in Lafayette, at least," says Landry. "So we realized our customers have a choice. It's important to us that they want to come here."

So things like automatic doors for easy access for those with arms loaded with packages, and free fresh coffee all day "are little things that people really appreciate," Landry says. "The dollies just kind of made sense because a lot of times, people are coming with carloads of stuff."

Landry says when a customer needs help, the staff gladly obliges, going to the car and loading a dolly. Other customers, unable to walk so well, call ahead and are met in the parking lot.