"It's what it is. Things take time," says Billy Jacob, who thought registers would long be ringing by now at his first Lafayette location for Five Guys Burgers and Fries. First reported by ABiz in late 2010, a familiar face is introducing the country's top rated fast-food burger to Lafayette. Billy Jacob, whose family owned and operated Jacob's Restaurant at Four Corners from 1935-1985, returned to Louisiana that year from Atlanta to develop the successful Virginia-based chain, Five Guys Burgers and Fries. Seventeen years before returning to his home state, Jacob worked for Popeyes' corporate entity as executive chef.

Jacob signed the lease for his spot at Ambassador Caffery and Settlers Trace (near Starbucks) 18 months ago and hoped to be open by now. "Finally, finally," Jacob tells ABiz Tuesday morning, declining to elaborate on the delays. "It's what it is. Things take time," he says. At the end of the summer, developer Shane Morrison will turn the restaurant over to Jacob, and the franchisee will need approximately 60 days of his own construction to get it ready for a mid-fall opening. The 2,700-square-foot restaurant will seat 100, accommodating about 20 for outside dining.

Zagat's annual survey has ranked Five Guys' hamburger the best in the country for the past two years. Two USDA Choice beef patties come on the burgers (the "little" burger has one), which are dressed with a wide selection of free toppings. The fresh cut fries come in lightly salted or Cajun style (go for the spice). 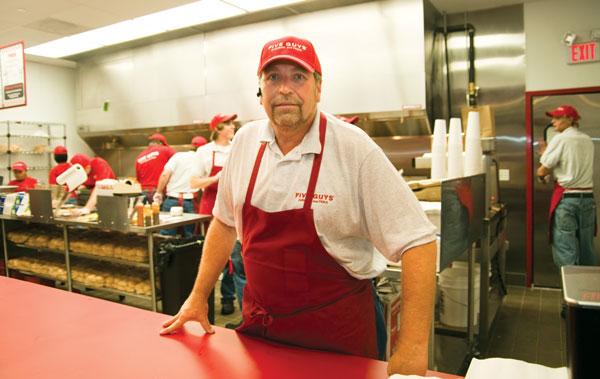 Billy Jacob, photographed at his first Five Guys location in Baton Rouge in late 2010, will open a restaurant on Ambassador Caffery and Settlers Trace in Lafayette this fall. Photo by Robin May

Jacob and his business partner, Rodney Johnson, opened the state's first Five Guys location in Baton Rouge's Towne Center on Corporate Boulevard in October 2010. The second location opened in Covington a year ago (where Jacob now lives), the third will open in the Northgate area of LSU - in the old Blockbuster on Highland Road between State and Chimes streets - and the fourth will open by September in Harahan. "After Lafayette is going to be Metairie ... across from Lakeside Mall in the old Ground Pat'i," Jacob says. He also has signed letters of intent in Slidell and Denham Springs.

"[Customers] have fallen in love with Five Guys," Jacob says. "Sales have exceeded our expectations, and the brand is pleased."

Jacob has development rights to all of South Louisiana (seven parishes). "I'm actively looking in the rest of my territory," he says.