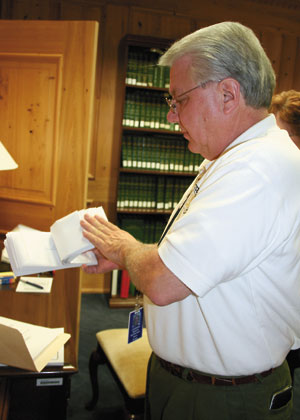 Today's era of unparalleled technology has sharpened and opened up the political landscape. E-mail and blogs allow elected officials and candidates to connect with voters in new ways, and many government branches use Web sites to post public records and detailed policy decisions.

Yet Louisiana's Legislature depends on stamps and postmen for making major policy decisions.

It often votes by mail, allowing correspondence to trump traditional debate. House and Senate staffers, in fact, spent most of last week stamping and counting mail ballots that proposed initial funding for the state's housing program.

They usually don't receive much press coverage and aren't treated with the same reverence as session votes, but these postal proxies are meaningful and do result in real government action. Year-to-date, through the first week of August, lawmakers have been asked to vote by mail on nine ballot issues since 2004 ' not including an emergency vote taken earlier this year to hold elections in hurricane-ravaged New Orleans.

But a public information request for the mail-ballot results reveals a participation rate that fluctuates from merely average to well below par. Additionally, the mail votes are not afforded the same standards as session votes when it comes to public access. They are not published in the Legislature's online database or in the official journal.

This lack of alternative record keeping can have repercussions. For instance, the state Senate was unable to find any recorded votes for a 2005 mail ballot where lawmakers decided against holding a veto session. Glenn Koepp, secretary of the Senate, says the ballots, as well as the tally sheet showing who voted how, were likely misplaced when being moved from one office to another.

"We tore this place apart looking for it," he says. "I think we just lost it."

The way this process and the votes are treated by the Legislature is more important than ever because mail ballots are about to increase. Legislative approval will be needed when the Louisiana Recovery Authority wants to spend more than $10 million. The LRA was formed last year following Katrina and Rita as a clearinghouse for federal money and other rebuilding issues.

House Clerk Butch Speer says the change could translate into roughly seven more mail ballots each year. This month alone, his staff will administer two LRA ballots on housing and labor. "We're going to be seeing a lot more of them," he says.

Traditionally, lawmakers have only voted by mail on two topics: whether to hold a veto session to overturn the governor's choices and to ratify certain actions by the Interim Emergency Board. The IEB handles emergency expenses that lawmakers don't plan for during the budgeting process. On a regular basis, the board asks lawmakers to approve appropriations, ranging in recent years from lock repairs for Acadiana to storm recovery money for Golden Meadow.

Brenda Erickson, a senior research analyst with the National Conference of State Legislatures, says lawmakers voting by mail when not in session is a new one for her ' even though it has been a Louisiana practice for decades. "Generally, members of legislatures are expected to be present to vote, but there are a few exceptions," Erickson says. "As a rule of thumb, though, most legislatures don't allow remote voting."

When it comes to actually returning the mail ballots back to Baton Rouge, lawmakers have differing records. According to the ballots provided by Speer's office, Rep. Cedric Richmond, a New Orleans Democrat, has the worst voting record ' by mail ' in the entire Legislature. Richmond doesn't have a single recorded vote on any of the ballots. When questioned, he suggests the tally sheets are "incorrect" and should be double-checked.

"I remember filling those ballots out," Richmond says.

He also argues that three of his votes on past veto sessions didn't have to be sent in, which is technically true. Voting on veto sessions is a tricky business. The law states that veto sessions are automatically held following a legislative session unless a majority of lawmakers return ballots calling it off. That means an absent vote on the tally sheet could either mean a lawmaker was in favor of a veto session, or he didn't bother voting at all. Staffers admit it's a confusing process and not very effective in determining where elected officials stand.

A few other members of the lower chamber trail Richmond in his voting record. Rep. Cedric Glover, a Democrat running for mayor of Shreveport, missed all but two of the regular mail ballots since 2004, as did Rep. Pete Schneider, a Republican from Slidell. On the Senate side, Sen. Max Malone, a Shreveport Republican, and Sen. Cleo Fields, a Baton Rouge Democrat, both have no recorded votes on four ballots.

Overall, the 39-member Senate has an average voting record by mail that runs parallel to session-only votes. About five senators per mail ballot have no recorded votes, representing 12 percent of the body. The House posts even more dismal numbers: an average 23 lawmakers, out of 105, don't vote at all on regular mail ballots, whether it's by mistake or otherwise.

Both Speer and Koepp say there hasn't been an overwhelming interest by lawmakers in reforming the way mail ballots are handled, from increasing public access to making veto session ballots more user-friendly. Unless the House and Senate do pass rules altering the way the process works, the only thing that will change is the number of ballots being mailed out. And for now, that's the only thing that can be expected.

"I have no plans and know of no plans to change anything," Speer says.