Because of its scope and literal size of the puppets, Wolves in the Walls is a team effort between Acting Unlimited (AUI), Wanderlust Theatre Co., and the UL-Lafayette Performing Arts Department. 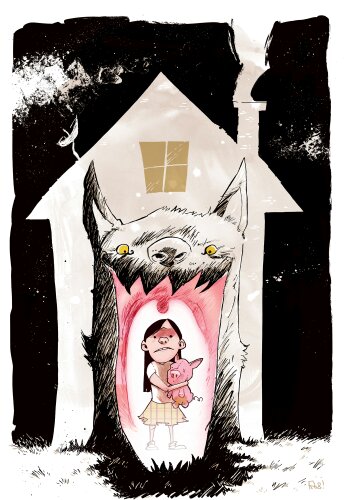 Wolves in the Walls

And because of its scope and literal size of the puppets, 'Wolves' is a team effort between Acting Unlimited (AUI), Wanderlust Theatre Co., and the UL-Lafayette Performing Arts Department.

The world premiere adaptation of  'Wolves,' a Neil Gaiman and Dave McKean's award-winning children's book, is scheduled for July 26-29 and August 2-5 at UL's Burke Hall.

"I'm really excited to have the opportunity to do it," says Marie delaHoussaye-Diaz, president of AUI and venue manager at Theater 810. "It's going to be as expensive as a musical might be, which is pretty expensive so we need the help to put it on."

delaHoussaye-Diaz says that's why she has turned to Kickstarter.com an online platform where an idea is posted for a project that needs funding.

"Kickstarter is very important to us," says delaHoussaye-Diaz. "We're just about two-thirds of the way there and that's terrific, but we need to make it all the way."

"In Kickstarter, you don't get the money unless you raise all of the money," says delaHoussaye-Diaz. "For every donation you have to give - however you want to term it - a goodie, a reward it doesn't have to be anything big, but it does have to be something."

delaHoussaye-Diaz says the reward-for-donations for 'Wolves' starts at $1 and goes up to $200, "but people can actually give whatever you want, but the largest donation we give rewards for is $200."

"I think 'Wolves in the Walls is going to bring a whole new type of theater to Lafayette," says delaHoussaye-Diaz. "It's a hybrid puppet acting show, but it's not like the kind of puppet show people think about. It's kind of on an adult level."

delaHoussaye-Diaz wants to make clear that 'Wolves' is not a puppet show along the lines of Punch & Judy or Sherry Lewis and Lambchop. "The puppets contribute to the whole storyline," she says.

That said, delaHoussaye-Diaz says the show "is really for everybody. It's in simple enough terms for children to also connect with," she says. "It's about facing your fears. It's about the power of imagination. It's about empowerment. And there's a little bit in it about friendship and how friends make things easier."