A UL dean and his TV wife head west, and Louisiana Crossroads is honored as the best in the state. 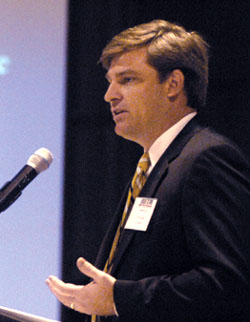 Dr. Lewis Gale, dean of the B.I. Moody III College of Business Administration at UL Lafayette, is leaving the university in June. The respected economist has accepted the dean's position with Weber State University's John B. Goddard School of Business and Economics in Ogden, Utah; his wife, Candice, KATC-TV3's morning show personality, hopes to segue into a much bigger TV market.

The Gales, who have called Lafayette home since 1994, and their two young children are leaving Lafayette to be closer to family ' Lewis' parents live in Sacramento and Candice's mother is in Phoenix ' and for health reasons.

"In the last few years, my health has taken a turn," says Candice, who suffers from asthma. The well-liked broadcaster says her doctor believes the new environment will alleviate her symptoms, freeing her of the medications she's been taking.

"It's a nice dry climate," she says of the mountainous city, located 35 miles north of Salt Lake City.

The Gales say they will leave Lafayette with a heavy heart. "Neither one of us really wants to go right now," Lewis says.

Earlier this year, Lewis and Dr. Paula Carson, the Moody College's associate dean/MBA director, joined The Independent Weekly in launching the Acadiana Consumer Confidence Index, designed to gauge Acadiana consumers' perceptions of the local and national economy. Carson, who will fill Lewis' shoes at the university in the interim, will also assume responsibility for the ACCI.

The Moody College, which this year relocated to a new state-of-the-art facility on campus, has more than 2,700 undergraduate students and about 170 graduate students in its MBA program. The Goddard School has 2,000 undergrad and graduate students, awarding more than 250 degrees each year. The school boasts scores on national exams that place its senior students among the top 1 percent in the country; more than 90 percent of them find jobs by the time they graduate.

"It's a school that has a lot of promise, a lot of opportunities. It's very much like [UL]," says Lewis. ' LT

Louisiana Crossroads has been named the first recipient of the 2005 Cultural Economy Development Award given by Lt. Gov Mitch Landrieu's Office of Cultural Development. Fourteen nominees from around the state ' including Gerald Breaux and the Lafayette Convention and Visitors Commission ' vied for the award of recognition.

Pam Breaux, assistant secretary of the Office of Cultural Development, says the award was open to individuals, organizations and even political entities that have managed to integrate partnerships that develop the state's cultural economy. Under the direction of Todd Mouton, the Louisiana Crossroads music series is a partnership between the Acadiana Arts Council and the Lafayette Economic Development Authority.

"The Cultural Economy Development Award is a very special award to Lt. Gov. Mitch Landrieu," Breaux says. "When we began the cultural initiative last year, he envisioned honoring not only the arts and culture in the state, but also the businesses that are developing the arts and culture in Louisiana. And we believe that Louisiana Crossroads is the best example of that in our state today." ' RRF**