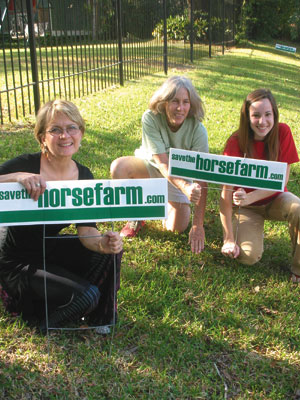 The efforts of a grass-roots campaign to safeguard both the former UL Lafayette horse farm and the Girard Park community from unspecified commercial encroachment are showing up throughout the city. In recent weeks, horizontal green and white "Save the Horse Farm" signs have begun dotting front yards from Girard Park and West Bayou Parkway to Oakleaf Drive and into other affected neighborhoods across Lafayette.

The group is opposed to a transaction that involves the exchange of 36 acres of UL's horse farm on Johnston Street for four acres of Lafayette attorney James Davidson III's Girard Park property ("Horse Play," Oct. 19). UL President Ray Authement, who wants property closer to campus for expansion, claims each is valued at $3.25 million.

Elizabeth Brooks, a UL senior with a double major in environmental and sustainable resources/Spanish, is president of the university's Society for Peace, Environment, Action and Knowledge (known as SPEAK), which organized the campaign and provided initial funding for the yard signs (available for a suggested $2 donation). Brooks also is the Web site coordinator; www.savethehorsefarm.com explains the proposal and includes links to focus groups that are headed by students, community activists and residents in the affected areas. (The Web site is also selling T-shirts and bumper stickers.)

"We have an entire committee that is focusing on exploring fundraising possibilities and/or land swap opportunities around UL so that we can bring a concrete plan to Dr. Authement that he can feel good about," Brooks says. "His main concern was space close to campus to expand the university, so we have to fit that into our alternative to the Davidson land swap deal."

Headed by local developers Dan Menard and Jerry Brents, BRE-ARD LLC intends to buy the Davidson land and swap with the university for the horse farm acreage. BRE-ARD has yet to provide a master plan for developing the raw land, the only enduring green space on the city's most cluttered thoroughfare.

Both the Johnston Street and Girard Park property are zoned residential. On Dec. 5, the university will ask the Zoning Commission to reclassify 36 of the horse farm's 100 acres to commercial, a request that faces strong opposition from local neighborhoods. Girard Park residents, who successfully fought off a rezoning of Davidson's property several years ago, want to keep that land's use residential as well. Authement says he will likely use the land to expand the university's nursing school.

Kolleen Bowen Verlander, who runs a B&B on Girard Park Drive, heads up the zoning focus group but is fighting the land swap on various fronts. Last week she sent letters to the Board of Supervisors for the University of Louisiana System, the entity that approved Authement's land swap proposal on Aug. 26, asking System President Dr. Sally Clausen and board members to reconsider the decision. A board member would have to request that the issue be added to the agenda for the next meeting, which is scheduled for a date prior to the controversial zoning hearing in Lafayette.

The Save the Horse Farm group meets on Thursdays at 5:30 p.m. in the Lagniappe Room of the UL Student Union and has been making presentations to civic organizations around town. "We're growing," Verlander says.

As of Friday last week, more than 620 residents had signed the online petition opposing the rezoning of the horse farm, but Brooks didn't have an updated count on the paper petitions yet. "It's at least 1,000 [total]," she says.