Local and state government and evacuees search for answers to the post-Katrina housing crisis. 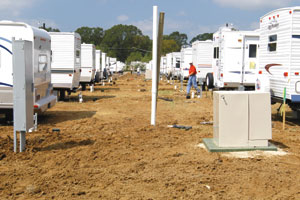 A month has passed since the disaster that left Louisiana with a population of dispossessed not seen since the Great Dust Bowl or the Civil War. One of the biggest questions remains: what are the short-term and long-term housing solutions for evacuees?

The Federal Emergency Management Agency reports that 253,000 Louisianans are eligible for state housing grants. In accordance with the goal laid out by President Bush in a Sept. 15 television address, FEMA aims to have temporary housing by Oct. 15 for all 55,000 evacuees now in shelters across the state.

But how FEMA intends to accomplish that is anybody's guess.

But if any of this stock is truly viable, that's news to Lafayette officials. City-Parish President Joey Durel pressed FEMA for more answers about a timeline for progress in a conference call last Thursday morning, Sept. 29.

"I said give me a clue as to the goal and what's realistic for when these people will have a place to live," Durel says. "And there was no answer."

Lafayette has approximately 800 parcels of land that could be freed up through adjudication, says Durel. About a third of the structures on those lots ' houses, warehouses and businesses ' are of decent quality. The rest would have to be torn down, and it's unclear how many of the parcels are suitable for building. Durel and his administration were actively investigating possible land uses for the parcels pre-Katrina, but it's been a slow process filled with bureaucratic red tape.

"So far it's been two years, and we haven't been able to sort it out," he says. "So it is evidently a more complex issue than it would seem to be. But maybe Katrina will speed it up. Sometimes out of extraordinary situations, you find a way to make those things happen."

One thing is clear: nobody in Louisiana wants villages of trailer parks.

In the weeks after Katrina, national news outlets descended en masse upon the troubled settlement known as FEMA Village ' 551 trailers built in the aftermath of Hurricane Charlie in Punta Gorda, Fla. This hot and dusty fenced-in compound, located five miles from the nearest shopping center, became a center of teenage fights, drug dealing and domestic strife, and a harbor for fugitives from the law.

"It is to be expected when people are under a tremendous amount of stress," says Bob Carpenter, a spokesman for the Charlotte County Sheriff's Office.

That raises the specter that Louisiana, which has exponentially more displaced residents than Florida did last summer, could become a state filled with trailer villages. But there are factors weighing against that outcome: FEMA has checked out 300 sites across the state for mobile homes, and found only 33 that meet its criteria, according to Ron Sherman, who leads the agency's housing task force.

And Durel is adding his voice to the chorus.

A trailer village is more than a subdivision, he says. It implies thousands of people. It requires infrastructure, like roads, water and sewage, and services, like police.

"We don't want any new villages popping up in Lafayette that maybe five years from now, when the federal government and everybody is gone, we will have these things to deal with," says Durel. "You have to look at what you are going to inherit after four to six years, and that is what I am trying to talk about with FEMA. We have to deal with the immediate needs of people, but it is our responsibility to look at the future results of what we do immediately."

Asked about the skepticism to mobile home villages, FEMA's McIntyre says the objective is to provide residents with options, but time is of the essence. "Just put yourself in the place of the people who are sleeping on the floor. Would you like to wait months, or would you like somewhere where you could put yourself and your family?"

Many professionals who deal with housing and displacement issues warn against quick, temporary solutions.

"It's not a good condition for people to be in, and I say that because what we see in refugee camps around the world is that it causes a lot of social dislocation," says Lavinia Limon, president and CEO of Washington, D.C.-based U.S. Committee for Refugees and Immigrants. "Essentially for people who are dislocated, there is very little investment in the place they are staying. Just what do I care if I throw a piece of trash on the floor? It's not my floor, in my community. If that is combined with an unnatural habitat, say thousands of trailers stuck in a field, you end up with a community prone to dysfunction because people are not doing what they normally do."

In Lafayette, housing groups are offering their own solutions as alternatives to trailer towns.

The Habitat for Humanity model of using volunteer labor to build low-income housing would provide the added benefit of putting people to work. Limon stresses that work is crucial for displaced people, because it bolsters self-esteem and provides a sense of normalcy.

Melinda Taylor, executive director of the Lafayette affiliate, says Habitat's model has proven itself: The organization recently completed its 200,000th home and is ranked the 17th largest builder nationwide, holding its own against the country's biggest for-profit construction firms.

Another possibility is expanding the existing Section 8 program, says Walter Guillory, executive director of the Lafayette Housing Authority. This federal program subsidizes the cost of rent by paying 30 percent of a household's median income. Guillory suggests putting money in the hands of landlords who want to qualify for Section 8 but need investments to bring houses up to code.

"One of the advantages of Section 8 is it's mixed all over the community," says Guillory. "It's not all in one place."

Representatives of local non-profit groups, government agencies and private businesses were scheduled to meet Monday afternoon, Oct. 3, at the Halliburton building to discuss a coordinated response to the housing crisis.

The meeting aimed to define the scope of the problem and identify what needs exist and what resources may already be in Lafayette to meet those needs, says Taylor.

"The meeting will give us an opportunity to pool our resources and find out what we are seeing," Taylor says. "It will allow us to formulate a coherent response, rather than each of us going on our own tangents, duplicating services and leaving out needs."

Rebuilding Together Acadiana, the lead organizer of the event, intends to renovate vacant properties, but will rely on other groups to find properties, facilitate home buyer's programs, and provide other services.

A liaison from city-parish government was expected to attend, along with local real estate agents and contractors. One option slated for discussion is Habitat for Humanity partnering with contractors and developers.

Meanwhile, Durel says he believes FEMA is doing the best it can and expects significant developments in the near future.

"I often say that when you put a business together you have a lot of loose ends ' you have the lease, office equipment, a contractor â?¦" he says. "It just takes time for all the loose ends to come together, and all of a sudden things work. I just have this gut feeling that in the next week or 10 days you are going to see a lot of things that are frustrating all start to come together."