A fat surplus and a looming governor's race unleashed heavy-handed politics as well as regional and partisan fervor during last week's special session. 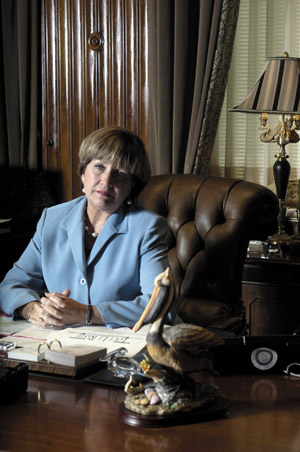 Commissioner of Administration Jerry Luke LeBlanc makes his way through the throngs of people gathered outside the Senate committee rooms. He's the moneyman from the Blanco administration, the epitome of power, and everyone wants a minute. A lobbyist manages a handshake and points down the hall. "Hey, I think you dropped $2 billion back there," he says. LeBlanc nods his head and looks back. "Yeah," he says still moving, "but I need two-thirds to pick it up."

LeBlanc is referring to a magic number: 70. That's the constitutionally mandated number of votes (two-thirds) in the House of Representatives that Gov. Kathleen Blanco repeatedly failed to muster for her spending plan, which fluctuated in cost depending on negotiations. It went as low as $800 million during the 10-day session's first half. Republican legislators consistently blocked her move to raise the state's $194 million spending limit and, as a result, Blanco's original proposal went nowhere. The GOP holds 41 of the 105 House seats ' more than enough to prevent Blanco from getting a two-thirds majority on taxes and other tough issues, and frequently enough to give her heartburn on controversial matters that need simple majority votes.

That, in a nutshell, pretty much sums up what happened in the governor's hastily called pre-Christmas session. The real story, however, is how it happened. The holiday session unleashed the nastiest kinds of regional, partisan and underhanded statehouse politics.

Prior to Katrina, the state budget had exploded by nearly $5 billion since 1997. With oil prices still in the stratosphere and recovery money coming in, the state budget continues to soar ' by billions of dollars each quarter, it seems. These and other factors gave the state an estimated $1.6 billion windfall ' and many consider that figure conservative. The special session was a modern-day gold rush, with the governor leading the charge to cash in. Little attention was paid to the notion that this could be Louisiana's second (and last) oil boom, and Blanco's agenda did not seem to reflect the idea that Louisiana could "get it right" this time around.

In many ways, the governor's special session plans were a throwback to the old way of doing things around the Capitol. She resurrected the strong-arm tactics that defined the tenures of former Govs. Mike Foster and Edwin Edwards. Both men would link unpopular taxes to supplemental pay for police, teacher pay raises or kidney dialysis machines for the poor. Such moves backed lawmakers into a corner, casting a "no" vote on taxes as a vote against cops, teachers or kidney patients.

The fiscal dynamics were different for Blanco, however, and she may have misjudged the political dynamic of the House as a result. She started the session by stating she would not stand for any tax credits (the only true consensus builder) unless legislators also adopted her spending proposals. Instead of wrapping taxes in votes for key constituents, Blanco dangled goodies in exchange for a vote to bust the constitutionally imposed spending cap. At the same time, she tried to use the stick on those who didn't go along.

Rep. Ernest Wooten, a Republican from Belle Chasse, says after he voted against raising the state's spending limit, the governor offered him part of $200 million for coastal restoration in his district. After turning Blanco down, Wooten says an anonymous phone bank blanketed his district, telling voters he was against everything in the administration's package. "I didn't want to come to the special session to be blackmailed," he says.

Instead, the GOP caucus beat back Blanco's spending plans. The House was forced to recess several times as Republicans, Democrats and African-American lawmakers conferred in their respective caucuses. The scene on the House floor was unprecedented and could represent a watermark in state policy making. "It's just been completely insane around here, with everyone meeting with their caucuses," says Rep. Michael Jackson, a Democrat from Baton Rouge and member of the Legislative Black Caucus. "There's so much being put into that."

To top it all off for the swaggering Republicans, last week also brought news that a personal dinner with the governor fetched only $1 at the Monroe Chamber of Commerce's annual holiday auction. The GOP's theory ' shared by many outside the party as well ' is that Blanco wanted the session to kick off her re-election bid. Having defeated her efforts to spend upwards of $2 billion on some of her key constituents, Republicans were filled with a holiday cheer all their own. Rep. Jack Smith, a Democrat from Franklin, fired back and referenced the likely GOP gubernatorial frontrunner: "The Republicans just want to wait until [U.S. Rep.] Bobby Jindal gets here to spend the money."

The partisan bickering was bad enough, but the divisions followed other fault lines as well. The Legislature's age-old regional divide resurfaced during debate over how to give people relief from property insurance surcharges imposed after hurricanes Katrina and Rita. Given that the storms devastated the southern stretches of the state and spared most interior parishes, it was only a matter of time before geographic divisions reared their ugly head.

Rep. Francis Thompson, a Democrat from Delhi in northeast Louisiana, complained that the state's insurer of last resort, Louisiana Citizens Property Insurance Corp., which took a major financial hit from Katrina and Rita, is now taking an unfair toll on citizens who were not in the path of hurricanes. "It's a bad plan when people in the north are paying a 15 percent fee or surcharge, and they're not getting any benefit from it," Thompson said.

Sen. Joe McPherson, a Democrat from Woodworth, made a similar argument when debating legislation that would allow the state-run insurer to buy reinsurance for future storms. McPherson said too many officials have been "pushing the envelope" on coastal protection, while his constituents are more concerned about roads. "Why should our area be subsidizing people in the coastal zone?" McPherson asked.

Sen. James David Cain, a Dry Creek Republican and author of the Citizens reinsurance measure, offered an answer that may not have addressed McPherson's or Thompson's concerns, but it did serve as a gentle, if understated and little appreciated, reminder:

"I'd hope we're all in Louisiana together," Cain said. "At least I hope."