At least in the short term, the downstairs area will be available for private functions, Menard says. The business, called Soiree at Vermilion, will contract with catering companies or private chefs to provide food for a variety of special events - from small baby showers to wedding receptions capable of accommodating 350 to 400 guests - but Soiree's staff will run the event. "We're basically going to hire out for that; we're not touching the food just yet," Menard says. The new owners have not ruled out eventually converting the downtown space to a restaurant. 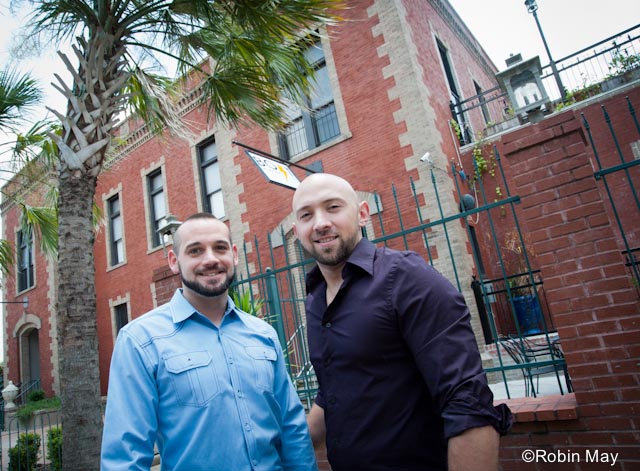 Justin Menard and Joe Speyrer are turning the upstairs of the former Trynd into Bolt Nightclub and will operate the downstairs as a special events venue.

Upstairs, the duo will introduce Bolt Nightclub, taking advantage of Menard's and Speyrer's experience in the bar business. The couple, partners in life and in business, most recently worked for Jules Downtown, a popular gay/lesbian bar on Jefferson Street. Menard spent eight years at the club, the last four as manager, and Speyrer worked at Jules as a bartender for a decade.

While Bolt will bill itself an "alternative lifestyle" bar, it hopes to attract a wide demographic regardless of sexual preference. "Basically, we're catering to everyone," Menard says.

Balbeisi closed his struggling Trynd restaurant and bar June 1. The beautifully renovated downtown space, a 1916 Masonic Lodge that once operated as Stan's Restaurant and nightclub and before that was a gay bar, opened to much fanfare and anticipation in late 2010 as an Italian eatery, lounge and upscale nightclub. It was the most ambitious Lafayette project to date for the affable restaurateur, but it never took off.