A lease and rent dispute between Acadiana C.A.R.E.S. and Roselawn Properties heads to court 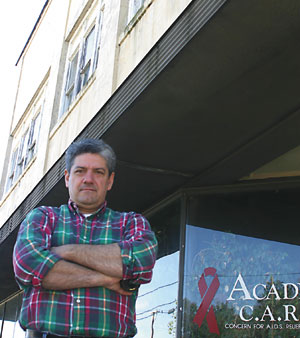 Since mid-December, when a lease dispute prompted Acadiana C.A.R.E.S. Executive Director Claude Martin to move eight HIV-positive residents of Hope House out of the downtown building owned by landlord Kathy Ashworth and Roselawn Properties, Martin has been expecting an eviction notice from Roselawn. It came Feb. 1, and a hearing is now scheduled for Feb. 21.

The specifics of the case hinge on whether C.A.R.E.S. or Roselawn was financially responsible for repairs, alterations, insurance, use of the elevator and utilities, and whether C.A.R.E.S. defaulted on its lease by not renewing it with a letter of intention. Hanging in the balance is $500,000 from the federal and state HIV/AIDS grants program. Only one thing seems certain: the relationship between Martin and Ashworth has deteriorated to the point where an amicable resolution is highly unlikely.

"Roselawn has been and continues to be a supporter of and contributor to C.A.R.E.S.," says Ashworth. "Unfortunately, actions of C.A.R.E.S.' executive director has caused strain on the relationship between Roselawn and C.A.R.E.S.." Ashworth declined to be interviewed for this story, citing the ongoing legal proceedings, but e-mailed statements on the case to The Independent Weekly.

"In May 2004, she refused to fix the floor," Martin says. "I tried for a year to get her to fix the floor. It cost a total of $550. I waited a year and a half, and I finally had to fix it. I deducted it out of the rent. Her reaction was hostile ' that we were in default of our lease and we were not paying our rent. She refused to accept our rent checks, trying to keep us in default to maneuver us into doing what she wanted us to do."

The eviction hearing should establish whether C.A.R.E.S. has a legally binding lease allowing the agency to stay in the building. C.A.R.E.S. asserts that its lease is good through 2012; Roselawn counters the lease terminated in October 2005 and that since C.A.R.E.S. refused to sign a new lease, the nonprofit is now trespassing on the property.

"Roselawn has gladly leased property to C.A.R.E.S. since 1999," writes Ashworth. "After C.A.R.E.S. began using the leased property as a residential facility for AIDS patients, its share of the liability insurance increased. Apparently disappointed with that self-imposed increase, C.A.R.E.S. filed suit against Roselawn in 2005 that if successful will result in Roselawn having to unfairly share the increase directly attributable to C.A.R.E.S.' use of the building, across Roselawn's other tenants."

On Nov. 1, 2001, C.A.R.E.S. entered into a second lease with Ashworth, this time for approximately 7,280 square feet upstairs to be used as Hope House ' office space and living quarters for HIV/AIDS victims. The lease was set to terminate on Oct. 31, 2002, with an option to renew for an additional nine years. The first seven years of the lease, monthly rent was to be $1,820, set to increase to $3,035 for the last three years, provided C.A.R.E.S. annually notified Ashworth in writing at least 90 days before the expiration of the lease of the agency's intention to stay.

Between 2001 and 2005, C.A.R.E.S. received multiple grants from the Louisiana HIV/AIDS program ' totaling $500,000 ' to invest in renovations of the upstairs residence. As part of the construction of Hope House, C.A.R.E.S. installed an elevator for its clients, at a cost of $55,000. When C.A.R.E.S. and Roselawn entered into the upstairs lease in 2001, the elevator became a pivotal part of the downstairs rent agreement. The upstairs lease states: "In consideration of Lessee's installation and maintenance of elevator and Lessor's use of elevator, rent of downstairs space (covered under a separate lease) will continue to be $1,200 per month for five years, then $2,000 per month for three years."

This paragraph is key to the lawsuit. Martin and C.A.R.E.S.' attorney Charles Kreamer assert that the upstairs lease modified the downstairs lease, extending its term. (The intention was that both leases would run and expire concurrently.) Throughout the period that C.A.R.E.S. was building Hope House, Martin and Ashworth's clashes began over the financial responsibility for repairs, alterations, insurance, use of the elevator and utilities. It became clear that a new lease with more precise language was necessary, and both sides ' along with their attorneys ' attempted to hammer out a workable lease agreement. Negotiations continued through the summer of 2005; July 31 was the date C.A.R.E.S. should have notified Roselawn in writing that it wanted to renew the upstairs lease.

C.A.R.E.S. failed to renew in writing, ostensibly because it was in negotiations, which Martin says demonstrates that the agency had every intention of continuing to lease from Roselawn.

Roselawn contends that C.A.R.E.S. was in default of its lease because it had failed to obtain written consent from Roselawn before making alterations to Hope House, and because C.A.R.E.S. had failed to notify Roslawn in writing 90 days before the October 2005 renewal date.

"Because C.A.R.E.S. has chosen not to renew its leases or sign a new lease, C.A.R.E.S. of its own accord caused C.A.R.E.S.' residents to move out of the property shortly before Dec. 31, 2005," writes Ashworth. "C.A.R.E.S., however, continues to maintain its administrative offices in Roselawn's building without benefit of a lease. Although Roselawn is willing to continue leasing the property to C.A.R.E.S. without a change in the rent, and has offered to do so on numerous occasions, Roselawn cannot allow C.A.R.E.S. to maintain its office in the property without a lease."

But the ability to collect higher rent has clearly crossed the mind of Roselawn. In a Sept. 20, 2005 letter to C.A.R.E.S., Roselawn attorney Hank Perret wrote, "At the outset, we should note a few of the many reasons why Roselawn should avoid continuing to lease to Acadiana C.A.R.E.S. once the leases expire next month. First, there is the significant financial cost. The Lafayette market has drastically changed since Acadiana C.A.R.E.S. elected not to renew its lease. Demand exists at premium prices. Acadiana C.A.R.E.S. has enjoyed rentals at a fraction of pre-Katrina market prices."

Roselawn threatened eviction and wrote a new lease, demanding that C.A.R.E.S. sign it or vacate the building. Kreamer contends that Roselawn is wrong, and that both leases are in effect. "Roselawn says C.A.R.E.S. needs to have a lease. That's incorrect. They do have a lease. What [Roselawn's] claiming ' Claude's failure to give them the 90 day notice ' is a red herring."

The new lease, according to Martin, is so unreasonable that his board won't allow him to sign it. As a result, the agency is primed to go to court to have the old lease upheld. C.A.R.E.S. has posted a link on its Web site, www.acadianacares.com, asking for contributions to its legal defense fund and also posted a copy of what Martin calls the "proposed 'unreasonable' lease" and a settlement proposal from Roselawn.

Ashworth and Roselawn are also citing documents to support their case. "The Rule to Show Cause that was recently filed in the Fifteenth Judicial District Court, docket number 2006-0525, provides a complete explanation of the issues," says Ashworth. "We encourage anyone with an interest in this case to read the filing. We also encourage those with an interest to read the original suit filed by C.A.R.E.S. against Roselawn and Roselawn's response."

Former Lafayette Bar Association President Gary McGoffin says the new lease puts all the control in the hands of Ashworth. "There were reciprocal clauses in the old lease that are no longer there," he notes. For instance, the new lease contains an early termination clause: "The right to terminate at the end of October of each year is absolute and may be exercised by either Lessee or Lessor in their sole discretion." McGoffin says the most important issue for a lessee who has made improvements to property is the ability to stay for the full term of the lease.

In the case of C.A.R.E.S., the ability to count on the term of the lease is crucial, in light of the $500,000 grant monies from the federal and state HIV/AIDS program. "The HIV/AIDS program had hoped this issue could be resolved amicably without the need of a lawsuit," says Beth Scalco, administrator for the Louisiana HIV/AIDS program. "Since we have not been involved in the dispute and the issues surrounding it, we do not feel it is appropriate to take a position on the suit.

"In regard to the federal funds invested in the building, there is a requirement that the facility provide housing for a period of 10 years based on the level of federal assistance provided," Scalco continues. "Should Acadiana C.A.R.E.S. be unable to fulfill the 10-year requirement, they will be required to repay the funds to the state. This requirement was outlined in their contract with the state."

C.A.R.E.S.' lawsuit alleges that if it is evicted, Roselawn is obligated to repay C.A.R.E.S for the cost of the upstairs and downstairs improvements and the costs of relocation.

McGoffin says C.A.R.E.S. has a credible claim for damages and reimbursement based on the Louisiana Civil Code, which governs contracts. "It would seem that C.A.R.E.S. relied, to their detriment, on the upstairs lease, which benefits Roselawn," he says. "Acadiana C.A.R.E.S. entered into the upstairs lease with the assumption that they would be able to renew for eight years, and they made the improvements [believing] that they would be there. It looks like they have a tenable claim."

Other aspects of the "new" lease could also be problematic for C.A.R.E.S. The clause Martin is most concerned about reads: "Whenever Lessor's consent is requested by Lessee, whether pursuant to the terms of this Lease, or otherwise, the Lessor's consent may, in each such case, be unreasonably held."

Martin says no one would sign such a document.

Kreamer maintains the position Roselawn is taking ' that it has the right to be unreasonable ' is preposterous. Demanding that C.A.R.E.S. sign this lease or vacate the property is "constructive eviction," Kreamer says.