A romantic comedy and farce of sorts, otherwise known as The Complete Women of William Shakespeare, is set for Theater 810 this week and next. In today's parlance think Desperate Housewives and Saturday Night Live in one play. 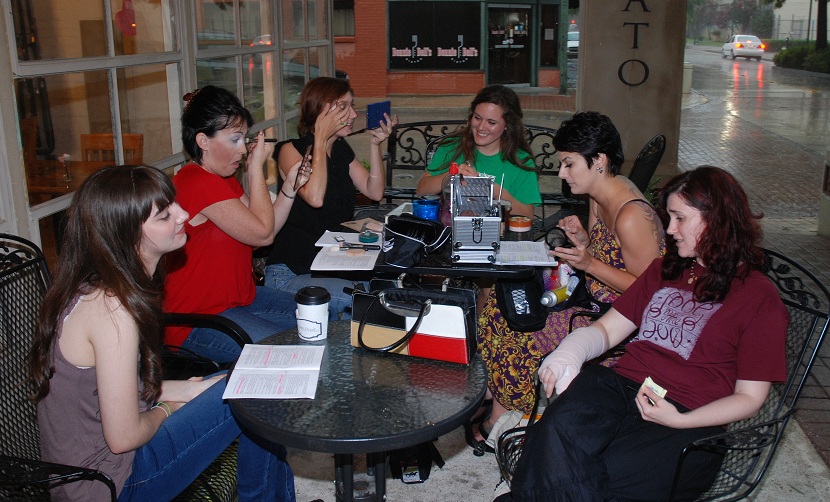 What happens when you combine two short one-act plays, a cast of women and a long-dead playwright who continues to delight audiences today?

Well, at Lafayette's Theater 810, you'll get a romantic comedy and farce of sorts otherwise known as The Complete Women of William Shakespeare. And in that you'll have Second Best Bed by Tim Kelly and When Shakespeare's Ladies Meet, by Charles George.

And you can catch the play Friday through Sunday this weekend and next. Curtain is 8 p.m., except on Sundays, when it is set for 3 p.m. Tickets are $7. At the 3 p.m. June 10 performance, the Affiliated Blind in Lafayette will have a translator on hand signing for the hearing impaired.

A resident of Lafayette for 12 years, but a native of Wales, it doesn't take a telescope to see Schneider's interest in her directing debut about the Bard.

"I just love to explore the background - so much is known about Shakespeare, but so much isn't - and he was sort of the rock star of his era," says Schneider. "I love to find out the little stories, the little backgrounds, the little misadventures that people have put on his life and his work.

"And it speaks to me," she says. "Because these are about his women."

A romantic comedy, 'Best Bed' is about Shakespeare's wife, Anne Hathaway, who learns that she inherits the couple's second best bed when her husband dies, a curiosity that has had historians speculating over the years, according to Schneider.

"Now what does that mean? Does the second best bed a tribute to the fact that they different have a great love which is why he lived in London and wrote his plays? Or, was the second best bed his marriage bed because the first bed was reserved for guests," she says. "And it was actually sort of the poet's way of  showing that he loved her."

Schneider finds a way to relate the story to day's audience.

"It's like 'Desperate Housewives of the 16th Century," says Schneider. "A whole bunch of gossips descend on Anne's house because they found out what she got left and oh, it's a huge scandal. So, Anne comes home to find desperate housewives at her table discussing her life, her history and her husband, and then finds out his special message to her."

The second act brings together six heroines of Shakespeare discussing love with Juliet who has just hooked up with Romeo. Or, as Schneider says, "Saturday Night Live from Verona," as she finds yet another way to relate it to a 21st Century audience.

Schneider has also incorporated other women from the Bard's plays as patrons and even has Lady Macbeth as the bartender "in a blood-splattered apron."

Although the play has an all female cast, it is not along the lines of a chick flick by any means.

"We want guys to come along and watch it and have a good time," says Schneider.