When a downtown Lafayette nightclub was shut down for overcrowding, confusion reigned on Jefferson Street. 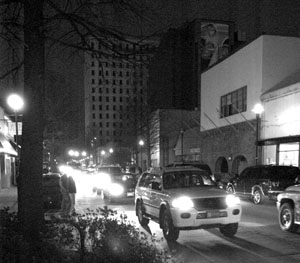 Phil Martin was working the door at the Renaissance Café and Night Club around 1:45 a.m. Sunday, May 22, when he saw a crowd of people bolting down Jefferson Street toward him.

"It looked to me like there was a riot going on," Martin says, "because people were running around, in the middle of the street, like they were getting away from somebody. It was quite a few people. When I saw people running down the middle of Jefferson Street, I started wondering what was going on."

At the time, Martin had no way of knowing that nearly 500 patrons of the nightclub Rain, two blocks away, had been expelled from the club minutes earlier.

Marcus Bruno, criminal justice administrator for Lafayette Consolidated Government, says that Rain was permitted to hold 299 patrons, but that 482 people were inside the building, and another 200 were waiting in line outside to get in the club. An administrator for the state fire marshal's office confirms that an anonymous complaint was filed against Rain for overcrowding, and the complaint was then turned over the Lafayette Fire Department, who shut the club down. Bruno says there were at least two fights that broke out after the club was emptied. Calls placed to Rain went unreturned as of press time.

Martin says that the crowd was coming from the direction of Rain and that he saw people wearing yellow bracelets with "Rain" written on them. Concerned about the situation, Renaissance owner Judd Kennedy and Martin closed the front doors of Renaissance. Kennedy announced over the PA system that the door was closing, but that if anyone needed to leave, they would be escorted outside by a Renaissance staff member. "We let people stay inside until the streets were pretty much clear, and the police had everything under control," Martin says.

All available police units were called downtown to help clear the area, but Lafayette Police Major Les Jones says that there wasn't anything unusual about this Saturday night. Seven officers usually patrol downtown on Saturday nights and an additional 35 to 40 officers work the night shift in Lafayette.

Keith Sonnier, owner of The Ballroom, two doors down from Renaissance, left his business just after 9 p.m. after hosting a wedding reception. "I don't stay downtown late at night because of the traffic jams," he says. "People aren't really stopping and parking, they're just riding. It's cluttered from one end of Jefferson Street to Evangeline Thruway. They're making conversations in the middle of the street. It can take 30 minutes to drive down the street, especially when people are stopping and talking in the middle of the road."

Sonnier says that since the beginning of April, he has noticed an increase of car traffic on weekend nights. "It's not gotten any better in the last two months," he says. Sonnier says he is concerned for his patrons' safety and has hired an additional security guard.

"That night there were several people out on the streets," Martin says. "A lot of them were not going into the clubs. For some reason, there's a new trend to hang around on the street, to bring your alcohol from home and just loiter along the walls of the businesses."

"Last weekend every high school in Acadiana graduated," says Lafayette Police Cpl. Mark Francis. "So we had a lot of high school graduates, and downtown is the popular hangout. There's the added attraction with the parks for everybody to come hang out, and there's people who are upset that don't want the loitering. But the way that downtown is designed, it offers that. I understand that businesses don't want to deal with it if they're not making money with it, but when there's so many people versus a few officers, it's difficult to move thousands of people."

"I've never seen anything this bad in downtown before," Martin says. "If it's serious enough that we're having to shut the doors down, there's a problem. I've always felt like something like this could happen because I've seen how everything's building up downtown. I've gone to the [City-Parish] council and expressed my concerns about it, and we've never really seen an influx of officers down here, as far as I'm concerned. Maybe there are, and I just don't see it."

Martin says that Renaissance has hired additional security, but that it still won't solve the problem on Jefferson Street. "I would like to see the council bring more officers downtown and do something about the loitering," he says. "That's the biggest problem I see down here. When you have people hanging around on the streets, that just opens people up to get into some trouble. A lot of these people are under age ' 16, 17 years old ' and they're not even supposed to be down there in the first place after 11 or 12 o'clock, but they're hanging around down there."

Francis says that Lafayette police are receiving loitering complaints from downtown business owners and residents, but that it's a catch-22 for downtown. "We're very much aware of the fact that there's a lot of people down there," he says, "but I'm also aware of that fact that downtown was revitalized to attract people down there. At one time there was nobody downtown, and people were crying to get them downtown. Now everybody's downtown, and they're crying, trying to get rid of them. It's amazing."

"When you have a small area with a high concentration of people," Jones says, "plus you add alcohol to it, you're going to have problems. It does present some challenges for the police department."