Coming off a banner year, Lafayette Parish retailers break another record in 2004. 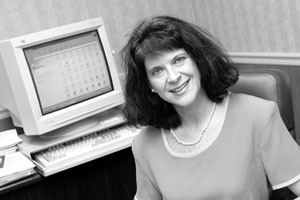 Stephen Landry has 21 reasons to be optimistic about the future of Lafayette's economy.

"I don't have anybody coming in here crying, which is about the only way we can gauge it," jokes South College Center co-owner Landry, who has 21 tenants in his shopping complex at the corner of Johnston Street and South College Road. "We have no whiners and no complainers," he says.

Landry's center is perhaps the best example of a cross-section of retail and service outlets in Lafayette. It's a healthy mix of long-established shops, fresh faces and one brand new spot, a pet grooming center and boutique called Spoiled, which is tentatively scheduled to open in March. And all jokes aside, Landry keeps his finger on the pulse of their activity, which is why news that Lafayette Parish has broken yet another record for retail sales ' the total amount spent by consumers on goods and services ranging from clothing and groceries to utilities ' didn't come as a surprise to him.

Landry says his tenants are thriving. Cell phone company Nextel had one of its biggest months ever this past January; Acadian Religious celebrated a banner weekend recently; True Value/Medallion Hardware is benefiting from the boom in upscale home construction; and Musso Shoe Repair's employees are bumping elbows with each other to meet the demand for their services. "They can't keep up with the need. He does a tremendous business," Landry says. Landry and his brother, David, also own the UPS store in the center, which experienced a 15 percent increase in volume in 2004 ' its best yet.

The most obvious sign that business is abuzz in the center is the success of Southside Bakery. After opening in mid-2003, it recently renovated its corner space to expand the bakery's offerings.

Though a rise in retail sales reflects an increase in spending, it certainly does not indicate that retailers across the board ' some of which are struggling in the face of new competition ' are in a better position than they were a year ago. The utilities group accounted for the biggest increase at 65 percent; furniture and home furnishings, 18 percent; lumber and building materials, 7.9 percent; and auto, 6.3 percent. Decreases came only in apparel and miscellaneous services, which includes hotels, bowling alleys and dry cleaners.

Economists caution that price increases must be factored into retail sales tallies before determining if there's been real growth. The level of increase in Lafayette Parish, however, is typically a positive indication, says Dr. Paula Carson, associate dean of UL Lafayette's B.I. Moody III College of Business Administration. "Even if you can chip away [at the 3.6 percent increase], I think there will be residual growth that you can see."

From 2003 to 2004, the Consumer Price Index, which reflects changes in prices paid by consumers for a typical basket of goods and services, increased 1.8 percent. Accounting for that increase, the uptick in local sales would be 1.8 percent, but the parish's chief economic development official insists the local tax base is growing at a higher rate. (End of year figures for the nation were not available at press time.)

"We've had significant job growth, that could be a factor," says Gregg Gothreaux, head of the Lafayette Economic Development Authority. He also points to the impact of new tourism dollars, a sector that picked up in 2004 for the first time since Sept. 11, 2001.

Additionally, Gothreaux maintains that per capita income in Lafayette Parish is increasing faster than the national average, rising 58.6 percent from 1993 to 2002, the most recent period for which tracking is available. Despite that growth, the portion of total income spent on retail goods in Lafayette Parish has remained stable at 63 percent, he says. "More dollars were spent without an increase in [percentage] spending per person," says Gothreaux.

Economist Carson agrees that Lafayette is selling much more than consumer products, which is why it's able to draw in many dollars. "I think the Lafayette area is doing a much greater job in terms of diversity," she says. The city's growing variety of products and entertainment venues is drawing shoppers from outlying areas like Abbeville, New Iberia, Opelousas and Rayne. She says consumers from these areas shop the Mall of Acadiana, for example, and stay in town for a movie and dining. "It's an event, as opposed to a chore."

What's disturbing about the trend, Carson cautions, is the impact it has on the economies of the smaller municipalities. She says Lafayette is growing at the expense of outlying communities, and she doesn't see that changing ' despite passionate efforts by the leadership of those cities to keep locals from leaving. "It's like a train; it's hard to stop the train," she says.

Both Gothreaux and Carson say there may be more reason for shoppers to head to the Hub City. The food group expanded with new restaurants last year, but it held steady in terms of the percentage of retail sales it generates, accounting for about 17.5 percent of the total sales in 2004. With more on the way ' Bonefish Grill in River Ranch, Doe's Eat Place on Pinhook Road and Monitos' Tapas Bar & Restaurant downtown ' Gothreaux says the new establishments will in part redistribute some of the business. With all of the new restaurants introduced in the past year, this group ' which includes grocery stores and bakeries ' failed to show any significant growth in 2004. The largest group is general merchandise ' department, drug, hardware and sporting goods stores ' which accounts for 26.5 percent of all sales, followed by the food and auto group ' automobile dealers, service stations and boat dealers.

The future of local retail sales, hampered by the popularity of Internet commerce in the past few years, is more promising now, says Carson, who sees the novelty of purchasing online wearing off. "People are going back to traditional bricks and mortar," she says. Carson notes that people are fearful of identity theft and sharing credit card information, and want immediate gratification. "If you need a new pair of shoes for tonight, you're going to the mall," she says.

The parish shows a remarkable consistent pattern of retail growth. Sales rose steadily from 1995 to 1998, dipped in 1999 and began a solid climb, with the exception of a small .4 percent hiccup from 2001 to 2002.

Some of Landry's tenants, namely Garland's Salon, Buttross Jewelers and Ricky Smith Audio, have been around long enough to experience the biggest years in the parish's retail history, like the 40 percent swell in taxable sales from 1981 to 1982. Sales skyrocketed from $1.5 billion to $2.1 billion, dropping a year later to $1.75 billion due to a downturn in the oil industry.

Landry hopes that rollercoaster has come to a halt, explaining that South College Center's tenants, overwhelmingly homegrown businesses, can make better strategic moves and buying decisions when the economy is stable. "If they can get a little bit of growth every year, they're happier with that than with this big up and down stuff," Landry says.