Moss Automotive Superstore is under way at 1545 SE Evangeline Thruway.

On Wednesday Moss Motors broke ground on Moss Automotive Superstore, located on a 4-acre site at 1545 SE Evangeline Thruway, next to the Shell station near Surrey Street. The facility, which will sell a wide range of used cars at various price points - including very high-end luxury vehicles - offers easy access to the company's existing used car lot near that intersection. 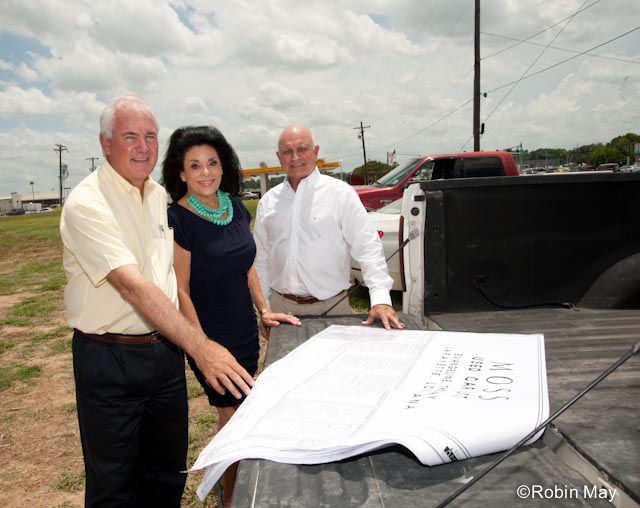 Pecot & Company Architects is designing the new location, a 4,320-square-foot sales building and 2,000-square-foot service facility, all being constructed by J.B. Mouton Inc. The center is slated to open next spring.

Moss Motors owner Sharon Moss says the lot will hold about 400 units. "We'd like to have eight or 10 exotics, like Maseratis and Lamborghinis, all the way down to $2,000 vehicles," she says.

"This is our 6th project with Moss Motors since 1997," says Robert "Popie" Billeaud, president and owner of J.B. Mouton. "The longevity of relationships like this allows local companies like ours to grow with the community."

The building that now services Moss' existing used car lot on Surrey, across from the airport near the supercenter construction site, will likely become Moss' Internet sales center. It will employ additional staff to handle phone call and email inquiries for autos listed online. About eight months ago, Moss hired Cappy Cavalier to head Internet sales, and she says Cavalier has been aggressively expanding the division.

Founded in 1979, Moss Motors is Lafayette's Mercedes, BMW and Honda dealer. Last year the company ranked No. 18 on ABiz's list of the Top 50 Privately Held Companies in Acadiana with $108 million in 2010 revenues. The company's annual sales increased almost 14 percent in 2011, rising to $123 million. Moss expects 2012 to be even stronger. "We had the best month in the history of the dealership last month," she says.