A new sign ordinance aiming to clean up the "visual pollution" of busy commercial strips like Johnston Street heads to the Lafayette City-Parish Council amidst contentious debate and a veto threat from City-Parish President Joey Durel. 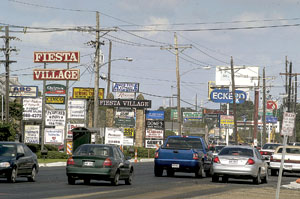 Drive down Johnston Street, and it's easy to see the issue. With a traffic volume almost as high as I-10, the borders of Lafayette's biggest commercial strip have become increasingly filled with an unruly array of billboards and business signs competing for the attention of drivers.

Councilman Bruce Conque says that signs are increasingly becoming bigger and being used more as marketing tools, making drives down commercial districts like Johnston Street less pleasant. "It's a matter of visual pollution," he says.

Conque is one of several city officials pushing for more restrictive regulations on Lafayette business signs ' an issue which has raised vocal opposition from several retailers and sign manufacturers. On Tuesday, Sept. 25, the Lafayette City-Parish Council takes up a new sign ordinance ' now more than two years in the making ' which would impose much tighter restrictions on the signs businesses are allowed to display. The ordinance requires most commercially zoned businesses within the city to construct more visually appealing monument-style signs no taller than 10 feet. Conque says the ordinance would create a look that is less "visually obnoxious."

"The signs will be more aesthetically pleasing, have some uniformity and be at eye-level to drivers," he says. The ordinance also cracks down on the proliferation of digital billboards, imposing an 8-second time limit on their messages and prohibiting the use of animated images. It is modeled after ordinances adopted in communities including Austin, Texas; Portland, Ore.; Missouri City, Mo. and Mandeville.

As it's currently written, the ordinance requires an amortization period of seven years for all businesses to come into compliance. The provision, more than any, appears to be a sticking point for several businesses. Brother Abdalla, who owns Brother's on the Boulevard clothing store and rents out space to other retailers in The Boulevard shopping center, says city government should not force any business to tear down their existing signs.

"I'm all for the beautification of Lafayette, including signage," Abdalla says. However, he says many businesses don't have the budget to tear down their existing signs and build new ones. Abdalla says he spent more than $30,000 on his On the Boulevard shopping center sign, which he notes is a well-designed monument sign that matches his shopping center. The sign would be illegal under the new ordinance because it is greater than 10 feet tall. He says digital signs like the one up at Don's Seafood Hut, also illegal under the new ordinance, cost approximately $100,000.

"I put up my sign for life," he says. "I can't afford to put up another sign like that. I'm not tearing my sign down. I can't afford to do it. You can't change the rules in the middle of the game."

These concerns have resonated with City-Parish President Joey Durel, a former retailer. (Durel used to own Durel's Pet Shop as well as a local Arby's franchise.) At a meeting last week with concerned business owners, Durel told Abdalla and others that he would veto any sign ordinance that included an amortization clause. "I was relieved to hear that," Abdalla says. "I think it sends a good message. Joey's not going to put that cost on the business owners of Lafayette." Durel did not return a call for comment. Aside from amortization requirement, Abdalla says he supports the ordinance

Because of the intense opposition, council members pushing the ordinance now say they plan to amend it during the Sept. 25 meeting to do away with amortization, effectively grandfathering in all existing signs. Only newly constructed business signs would be required to abide by the new monument signage requirements.

Conque says that while he favors amortization, it's been a negotiating point throughout the process. "I always thought that eventually it could be a deal breaker," he says.

Councilman Rob Stevenson expressed more regret that amortization will likely be abandoned. "I'm not thrilled about it," he says. "But if it's going to be defeated otherwise then I guess we have no choice. Personally, I think that's part of the problem with politics down here ' you can't get anything done because a few vocal people seem to have enough influence to change the outcome of things and that's a shame."

Both Conque and Stevenson point out that the ordinance has several provisions that hopefully will speed up signage transformation. The ordinance would require any sign that is replaced or newly constructed in the city to abide by the new regulations and stipulates that businesses be required to construct new signs in the event that more than 35 percent of their existing sign is damaged. The ordinance also prevents any new businesses from coming into a building and modifying any existing pole signage on the property.

"Signs don't last forever," Stevenson says. "So, they're going to be replaced. It's just going to take longer than I would have liked. It's a start."

"I'm hoping," he adds, "that when people who are grandfathered in see how attractive [monument signs] are and how much people like them better, even without the amortization, they will change their signs eventually of their own accord. If somebody has a really beautiful monument sign with flowers around it, nobody's going to want a sign on top of an old piece of drilling pipe next to it; it's going to look horrible."

The sign ordinance now appears to have the support of a slim majority of the council. But it will still face opposition. Dewey Boudreaux, president of Universal Sign Co., stands to profit from the new sign regulations, but still believes it's a bad ordinance because it is too restrictive. He supports allowing signs to a height of 90 feet. "You've got to draw the line somewhere," he says.

He also contends that the city has consistently failed in enforcing its existing sign regulations. "All the good, honest people are going to suffer because they follow the rules," he says. "Everybody else is not because they're going to get away with [illegal signs]."

Conque says that enforcement is a concern with the new ordinance. The Planning, Zoning and Codes department would be required to monitor for illegal signs. The Board of Zoning Adjustments ' a five-member body appointed by the city-parish president and council ' has the ability to grant variances to any of the signage restrictions. BOZA's rulings can only be appealed in court and not to the city-parish council.

Councilman Chris Williams, who first directed the zoning department to begin working on the new sign ordinance over two years ago, believes the majority of the ordinance's issues have been resolved.

"It is a hot issue," he says, "because whenever you get in people's pocketbooks, particularly government, it brings up a lot of concerns. But I hope at the end of the day when this is on the council table, we would have come to an agreeable medium in terms of what's good for the city and the city's landscape but not punitive to businesses."