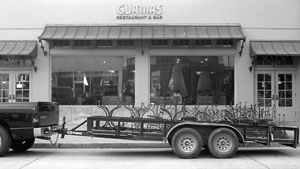 When downtown Lafayette got its "Streetscape" makeover in the mid-90s, engineers only marked the "apparent right of way," or public property line, on their street plans. The line varies from a width of 42 feet at the corner of Jefferson and Convent streets to approximately 65 feet wide at the corner of Jefferson and Vine streets. Planners assumed it wasn't necessary to get too specific with property boundaries since the public would have a right to the entire use of downtown sidewalks.

"This is not scientific," says Lafayette Public Works Director Tom Carroll. "It's really not set figures for any one property. It's just assuming there's a sidewalk here and it's been used for years so it's a public right of way."

However, the benign assumption has led one downtown restaurant to be cited as violating state law for obstructing a public passage. Of the nine restaurants that line Jefferson Street downtown, only Guamas, located near the corner of Jefferson and Vine streets, has al fresco tables that fall within the original public right of ways marked during Streetscape renovations. The law is only being applied to businesses that cross these lines, regardless of how much clearance space is left on the sidewalk. The Jefferson Street sidewalk is at its widest stretch in front of Guamas, whose sidewalk tables leave more pedestrian clearance room than most other downtown restaurants.

Lafayette police officers have already ticketed Guamas for violating a state law for obstructing public passages. They also warned the owners that they are in violation of another city ordinance for serving open glass containers on public property. Two weeks ago, Chief Administrative Officer Dee Stanley directed city attorney Pat Ottinger and Downtown Lafayette Unlimited Director Cathy Webre to visit Guamas owner Rubens Mesa and ask him to remove his tables following the conclusion of Festival International. "We thought that was the business-like thing to do," Stanley says. "It allowed this business to use those tables and thrive during festival."

Mesa agreed to remove the tables until city officials can develop a permitting process to allow restaurants to place tables outside on the public sidewalk. He packed his al fresco dining tables in a trailer last Thursday evening and hauled them off to a friend's house. (Mesa declined comment for this article.)

Police began taking note of downtown public property lines after discussion at a Lafayette City-Parish Council meeting in late March regarding downtown street vendor Faramarz "Frankie" Yaghobi, whose kitchen was forced off Jefferson Street after the council revised a city parking ordinance making it illegal to operate a business from a public parking space.

Fearing that Yaghobi was being singled out, councilmen Louis Benjamin and Chris Williams demanded that the law be enforced equally against all businesses downtown operating on public property.

At that time, Stanley says discussions were under way within the police department about how to secure the escalating traffic downtown. After the council debate over Yaghobi, City Police Maj. Les Jones says the department took measurements to see which businesses were on public property, and warned both Guamas restaurant and 307 Downtown nightclub that their outdoor tables were within the public right of way. (Police also warned downtown businesses displaying sidewalk clothing racks.) On April 8, police officers ticketed Guamas for its sidewalk tables in an incident that led to the arrest of three individuals at Guamas, including owners Mesa and co-owner Julietta Tarazona. Mesa was charged with resisting arrest and battery of a police officer, and multiple eyewitnesses at the scene maintain Mesa's innocence and claim police used excessive force in apprehending the restaurant owner ("Fighting in the Streets," April 20).

The incident intensified the need for a clear set of regulations for downtown businesses and vendors. In an effort to clear the confusion, a task force of city officials appointed by City-Parish President Joey Durel is working on developing downtown sidewalk business permits. The group plans to base the ordinance on regulations in Shreveport and Baton Rouge, as well as Asheville, N.C., which permits downtown businesses for sidewalk dining, merchandising and pushcart vendors. The task force is uncertain whether the ordinance will cover motorized vendors such as Yaghobi, who has moved his business onto a private lot just off Jefferson Street.

Asheville's ordinance provides all outdoor dining leave a minimum 6-foot clearance on a public sidewalk for pedestrian traffic. The ordinance also sets a $175 annual fee for restaurants to have a 30 square-foot area for sidewalk tables in its downtown district, with more expensive permits required for additional space.

The task force is still unclear whether Guamas will be the only existing restaurant that will need a new permit.

Downtown Lafayette Unlimited board president Rob Robison, who is working with the city in developing permits for outdoor dining downtown, says he thinks the permits should apply to all sidewalk restaurants, regardless of the current right of way lines.

"It doesn't seem fair," Robison says of Guamas' situation. He favors permits for all restaurants whose tables fall on publicly maintained property.

While the city continues to grapple with how to permit Guamas' tables, downtown restaurants such as Zeus Café, Mello Joy, and Chris' continue to attract business with their al fresco tables. All these restaurants are operating on their own private property ' beyond where the apparent public right of way ends.

Robison, who has seen downtown Lafayette boom since he started Jefferson Street Market nine years ago, sees the debate over sidewalk tables as the latest crash course in the city's continuing education on managing a vibrant downtown business and entertainment district. "It's kind of like a little town," he says. "We've been trying to catch up for a long time as people come in, and develop some sort of policy for all this."