It's Week 2 of The Independent's EatLafayette promotional Brewhaha beer blog, a fun, fact-filled dialogue about beer and booze that could land you with a free 12-pack of Bud Light Platinum to kickstart your weekend (courtesy of Schilling Distributing). Join the conversation - or start one of your own! - for a chance to win.

The Bayou State is home to only one parish that prohibits the sale of alcohol, and fortunately that parish is no where near Acadiana. Predictably, it's north of Alexandria, a region close in proximity - yet still worlds apart. 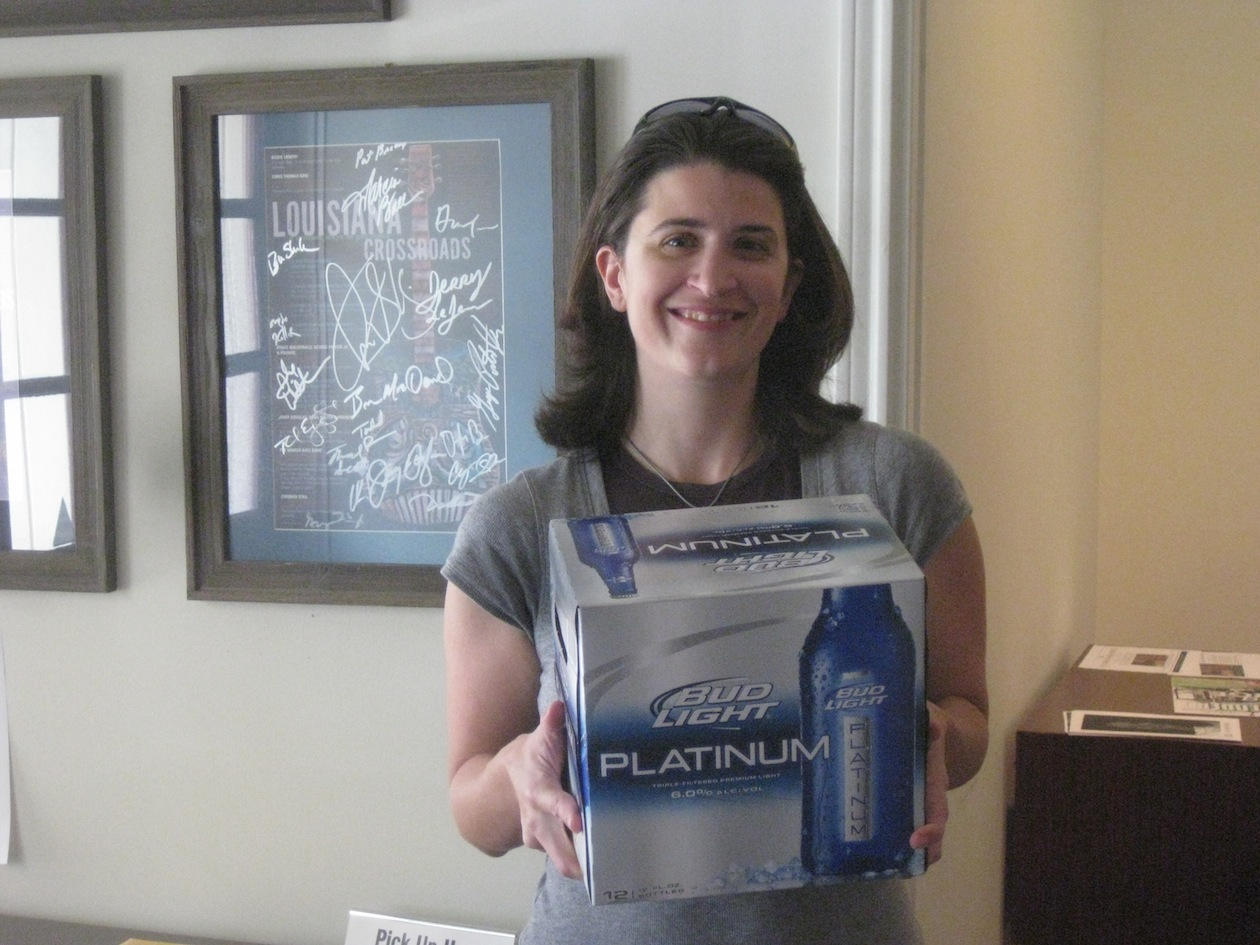 Ashley Clay Moran, pictured with her free beer,  is the first
winner of the The Ind's Brewhaha blog launched June 15.

The Brewhaha blog is back this week as part of The Independent's commitment to support EatLafayette and encourage local flavor. Every Friday The INDsider will post fun facts, trivia and more under its Brewhaha blog. Post your best beer responses under the Brewhaha blog on our website, and we'll choose one commenter per week to receive a 12-pack of Bud Light Platinum courtesy of Schilling Distributing.

But keep in mind that the first reader to correctly answer the weekly trivia questions is not an automatic winner, so keep the beer thoughts pouring from the tap and continue the conversation. We want personal anecdotes, jokes, horror stories, localized beer/booze topics, home brewing tips, moonshine-makers and more. The goal of Brewhaha is for readers to go beyond searching Google for the answer to a mundane bit of trivia. It's a dialogue, folks - and it's completely dedicated to all things booze.

The topic of this week's blog is Prohibition - topped off with a Louisiana mixer and a spicy bean for garnish.

Prohibition (or purgatory for un-boozed souls) was a 13-year period in the United States in which the sale of alcohol was banned with the passage of the 18th Amendment in 1919. The Era of Sober Feeling was fueled by a takeoff in temperance movements advocating for alcohol abstinence. It sparked unprecedented rises in organized crime headed by famous bootleggers like Al Capone, and it also paved the way for speakeasies (establishments that illegally served alcohol) and several other means of circumventing Prohibition. Ironically, the state that currently ranks last in the nation for beer consumption was the first state to repeal Prohibition. Can you name the state?

Although federal prohibition ended in 1933, there are still several spots in Louisiana where the sale of alcohol is banned. According to state Alcohol and Tobacco Control Commissioner Troy Hebert, local ordinances banning the sale of booze are in place in both towns and wards (areas of the parish as typically defined in parishes governed by a police jury), but only one parish in the state is completely dry. Can you name it? The exact number of towns and wards that prohibit alcohol within their boundaries is unclear, though we do know that they're limited to 15 wet/dry parishes in the state. Shocker: They're all in north Louisiana.

Have you ever vacationed or visited friends/relatives in a dry county or parish? Did you know it was dry before you arrived? Has anyone ever left a destination after learning there was a ban on booze? What's the longest distance you've ever driven to buy a case of beer or a fifth of your favorite gin?

Brewhaha Trivia:
-What did some towns in America do on the eve of Prohibition in response to the alcoholic beverage ban taking effect?
A. Converted courthouse basements into small distilleries for barreling whiskey
B. Hired additional law enforcement officers to inspect every home and business for alcohol possession
C. Sold their jails
D. None of the above

Brewhaha Fun Fact: The jury's out (cold)
-A Los Angeles jury hearing a bootlegging case during Prohibition was eventually put on trial after sampling the evidence in question. The jurors' defense? We had to taste it to determine whether it really contained alcohol. Say what?
The accused bootlegger was eventually acquitted for lack of evidence.