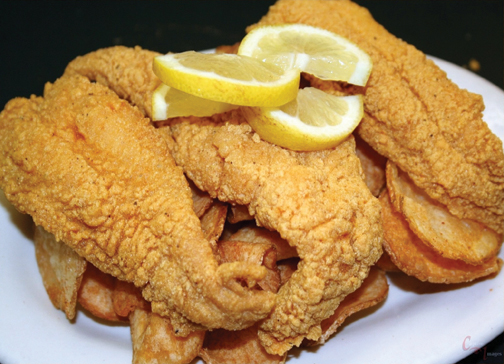 Crispy, golden and delicious, Nimbeaux's Cajun fried catfish is this week's Dish of the Week. According to owner Jim Babin, the fried catfish has been Nimbeaux's signature dish since the restaurant first opened its doors in July 2000. The dish comes in three sizes: small ($12.99), medium ($14.99) and large ($17.99). Orders are served with a choice of side, including coleslaw, hush puppies, steamed vegetables or sweet potato sticks. In addition to its fried catfish, Nimbeaux's Restaurant is famous for Cajun staples like the seafood platter, crawfish bisque, crawfish étouffée and poboys. Mention EatLafayette at Nimbeaux's Restaurant with an order of a whole poboy and get a free order of french fries or home fried chips.

Nimbeaux's Restaurant is open for lunch Monday through Friday from 11 a.m. to 2 p.m. and dinner on Friday and Saturday from 5 p.m. to 9 p.m. - Katie Macdonald

Mint, lime, sugar, soda.
Rafael Garcia moved to Lafayette from Havana, Cuba, as a political refugee in 1998 and began serving up mojitos with his own imported recipe 10 years ago when he opened Café Habana City with his family. His refreshing mixture makes it the quintessential summer drink, and he will happily serenade customers with songs from his homeland while creating the restaurant's signature concoction.

Though legends of the mojito's origin date back to the 1500s, most agree that the mojito was invented by pirates in the Caribbean when the Bacardi rum distillery opened in Cuba in 1862. Mojito's root word, "mojo," means to dress or season, referring to the muddled mint that gives the rum flavor. Garcia's recipe uses the classic fresh mint leaves, squeezed lime juice and sugar, but he uses ginger ale (regular or diet) instead of the traditional club soda. Those looking for a taste of Cuba can find two-for-one mojitos at Café Habana City all day, every day, as well as home-style Cuban food. Garcia serves up 14 kinds of mojitos, from original, mango and coconut to varieties with cosmopolitans, margaritas or amaretto. On Fridays, Garcia "brings a little piece of the Caribbean" to Lafayette for a weekly Latin night, converting the restaurant to a dance club, pumping Latin music through the speakers until 2 in the morning. Café Habana City is located at 911 Bertrand Drive and is open Monday through Wednesday from 11 a.m. to 10 p.m.; Thursday and Friday from 11 a.m. to 2 a.m.; and Saturday from 11 a.m. to 10 p.m. - Story and photo by Elizabeth Rose 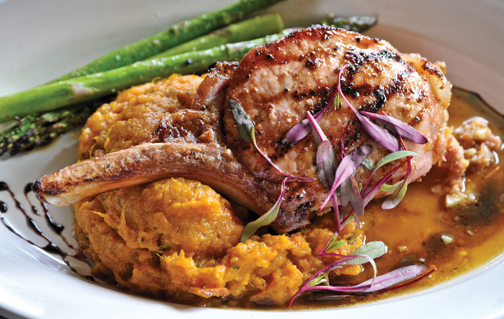 When it comes to traditional Louisiana food, there's little that locals haven't tried, much less perfected. From dark, thick gumbo and creamy crawfish étouffée to crispy strips of fried alligator, everyone and their mother has sampled the staples of Cajun cuisine.

But brothers Patrick and Steven O'Bryan aren't afraid to buck tradition at Pat and Steve's Bon Temps Grill, 1312 Verot School Road in Lafayette's booming south side. There, the Erath natives have crafted a unique menu that embraces familiar Cajun cuisine while introducing new ingredients and techniques.

"We don't want to be that same old fried seafood platter Cajun restaurant," Steven says as he describes how the brothers developed their menu.

"We spent many weeks in Steven's bedroom writing ideas on big dry-erase board," Patrick says. "We would say a particular food we wanted on our menu, then figure out how to make it unique."

An example of this brainstorming is the restaurant's take on alligator: BBQ Alligator Doria, a cheese and boudin-stuffed alligator grilled on the restaurant's titular mesquite wood grill. It is accompanied with grilled vegetables and a choice of sides.

"I don't know anywhere else where alligator isn't fried strips," Steven says laughing.
This gator certainly is different. Instead of the chewy chicken-like quality associated with fried alligator, the Doria is extremely tender and highlights a variety of spices in the stuffing and meat.

The boudin stuffing, as well as the sausage used in Bon Temps Sausage and Boudin Board appetizer, is from NuNu's Fresh Market in Youngsville, highlighting the duo's dedication to use local ingredients when possible. The restaurant's executive chef Alexis Cupich utilizes homegrown produce when it is in season and incorporates local products like Steen's cane syrup.

Our visit's final experience with the O'Bryan twist is their Bananas Foster Bread Pudding, a massive dessert you'll want to share. The bread pudding is made with fresh bananas and Myers's Dark Rum, topped with a generous scoop of vanilla bean ice cream and drizzled with homemade Bananas Foster sauce. The inspiration for the dessert, the brothers say, came from a desire to blend the delicious flavors of two of their favorite desserts.

Bon Temps' EatLafayette special is a choice of either $5 off dinner with purchase of $25 or more or half-priced bottle wine any day. (You can get both deals on Tuesdays.)

Open for two months now, Bon Temps Grill is the brothers' decades-long dream. Both grew up with Cajun cooking in nearby Eunice and then paid their way through college at UL Lafayette by bussing and waiting tables at local restaurants like Café Vermilionville, Ruth's Chris Steak House and Copeland's. Following their graduations, they remained in the food industry.

They chose to build Bon Temps Grill in the former Louisiana Crawfish Time because of its proximity to Lafayette's fast-growing south side. "This side of Lafayette is booming, and there is not a whole lot of restaurants on this side of town," Patrick says. He also describes how the location is perfect for both workers and families because it lies just outside of Lafayette's traffic-clogged center.

But perhaps what was most exciting for the brothers was the chance to build a restaurant that reflected their vision of a "come as you are" environment. With the help of family and friends, they completely remodeled the restaurant with cypress and bricks from their family's old farm in Abbeville. The result is a warm and clean atmosphere that radiates character - from the handmade wooden tables to the bar Steven's father-in-law built himself - and a bon temps.

Happy Hour from 3 p.m. to 7 p.m.
$2 domestic longnecks
$1 off all pints and wine by the glass
half off all well drinks
Tuesdays are half-priced bottled wine