Beau Box Vice President Monty Warren had been looking for warehouse space for his client, Johnson Supply, for more than two years. The Texas-based heating/ventilation/air conditioning and refrigeration wholesaler, which has operated in Lafayette for 26 years, outgrew its Banks Avenue facility long ago but has not been able to find a facility to meet its needs, Warren says.

Beau Box Vice President Monty Warren had been looking for warehouse space for his client, Johnson Supply, for more than two years. The Texas-based heating/ventilation/air conditioning and refrigeration wholesaler, which has operated in Lafayette for 26 years, outgrew its Banks Avenue facility long ago but has not been able to find a facility to meet its needs, Warren says.

That search came to an end in June, as developer/commercial real estate agent Hammy Davis' latest project, renovation of the old Mayfair Window and Door Co. warehouses at 4100 Cameron St., proved to be a perfect fit. Johnson Supply has leased two of the buildings at the site totalling 20,600 square feet. Warren says the buildings are being renovated to appear as one structure, but in his view, there's much more to the project than finding the right spot for his tenant.

"The more relevant piece of it is bringing back a fairly dilapidated structure on Cameron Street with a ton of potential," Warren says, noting the uniqueness of the buildings due to the type of business Mayfair did. As one might expect, there is an inordinate amount of glass. "It's unusual to find an industrial property that has natural light coming into it," Warren says. The complex consists of five buildings housed on a 12.5-acre tract that total 120,000 square feet; they were abandoned in March 2011 when Mayfair shut down its local operation. 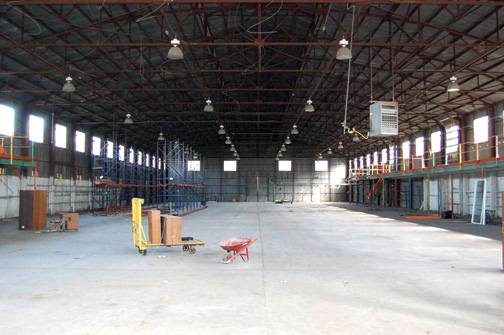 "A couple of [the buildings] have 100-foot spans, which means no columns for 100 feet in between them," Davis says of the Mayfair structures.

The architectural features and sound construction were a big attraction for Davis and his partners in Mayfair Revival LLC, which purchased the structures in April. "They are absolutely some of the neatest buildings you've ever seen," Davis says. "A couple of them have 100-foot spans, which means no columns for 100 feet in between them. They've got windows throughout, both upstairs and downstairs; they are just one-of-a-kind. It creates a really great feel to the building," he adds, noting that the planned renovation is designed to further enhance the openness of the metal structures, which were built in the late 1950s to early '60s.  "It was just built in older standards which today would be so expensive to build," he says.

Davis has already sold one of the buildings - a 40,800-square-foot warehouse with an addition on the back - to an undisclosed tenant that will do its own renovations; in June he finalized the lease with Johnson Supply. "That area of Cameron is real ripe," Davis says. "There is a real demand for supply houses; it's just been a hotbed for electrical supply houses, distribution. That's mainly what will be there, distribution."

Davis launched the Mayfair project on the heels of the success of Hero's Point, a 70,000-square-foot warehouse/distribution center off I-10 and North University Avenue that broke ground in 2009. "That's full and we're starting on Phase II on that one, but I have [no tenants] to announce yet," he says.

The north Lafayette development was an ambitious undertaking, Davis acknowledges, as the center was introducing a new type of distribution model to the marketplace at a time of economic uncertainty. It was slated to be part of a larger development of the site, but when the national economy took a hit, the plans changed. "I was just scared when we came out of the ground," Davis says. "We had our front corner under contract, and at that time a hotel was going to go in there. A lot of that fell through as a result of the economic downturn," he continues. "But there is a flight to quality; there's nothing like it in town - loading docks across the back. And Mayfair also has a bunch of loading docs that are going to make it very attractive for distribution."

As it turned out, Lafayette more than held its own during the national recession, and Davis says new activity in this area of the parish is renewing interest in his development near North University Avenue. "I think that hard corner is coming back," he says. 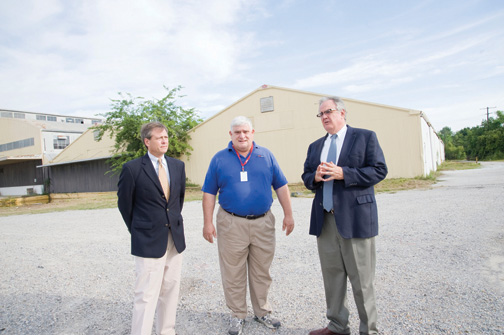 Warren, who was first to help Davis secure a lease on the Mayfair project, also filled the last two spots in Hero's Point - a distribution site for Snyder's-Lance Inc. and warehouse space for KW Smith Furniture. "He knows the market, knows the product, knows a lot of the people in the market and what they need," Warren says of Davis. "From my perspective, I tend to work with a lot of tenants," Warren adds. "If I have a tenant looking for something he's typically one of the first people I call: Do you have anything coming up, you know of anything?' He's well connected as an owner [of properties]."