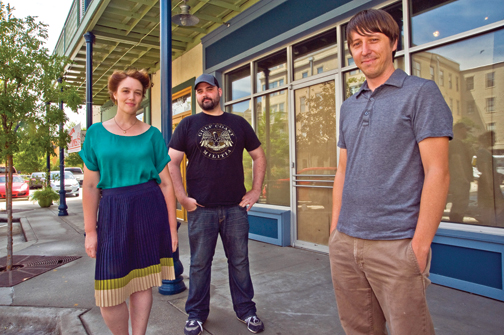 A popular apparel shop in downtown Lafayette expands its concept and product line to River Ranch.
By Walter Pierce

You'd never know Bram and Jillian Johnson are Tennessee natives. The brother-sister duo behind the popular Parish Ink line of Cajun Country-themed apparel, they've made a name for themselves celebrating the colloquialisms and iconography of South Louisiana in their smart, quirky line of T-shirts, dresses and scarves through an eponymous website and shop in downtown Lafayette.

Now they're looking south to River Ranch with a second, broader venture that will also incorporate the Parish Ink brand - Red Arrow Workshop, a concept they've been test driving via booths at festivals.

The shop is set to open later this summer on Rue Promenade next door to Maven's Menswear.

Jillian says about 40 percent of Red Arrow will be Parish Ink merchandise; the rest of the store's shelves will be stocked with a wide array of products, from home décor to classic toys.

"We're basically kind of reaching out to a lot of small businesses like ours all over the country that make really great products," Jillian explains. "There's a company out of San Francisco called Decoylab - we'll be carrying their clocks, and they're made of laser-cut acrylic and bamboo. We're reaching out to about 50 or 60 different companies like that, so we'll be carrying a little bit of everything - from housewares and kitchen items to décor; we're going to have a pretty good sized baby and kids section, so we'll have a lot of organic, eco-friendly clothing and smart wooden toys that get kids' brains working."

Another characteristic of much of the Red Arrow product line will be fair-trade, "green" merch. "We try not to be preachy about that particular aspect," Jillian adds, "but it was important to us to have that going on."

Jason Brown, the crime/court reporter for The Advocate's Acadiana bureau and Jillian's fiancé, is also a partner in Red Arrow.

"This kind of grew out of a desire to have a creative outlet outside of writing," he says. "The idea that we could really make money at it didn't set in until last year when we attended Bayou Boogaloo in New Orleans. The festival-goers there really seemed to respond to the products."

Like the Johnsons, Brown is devoted to an eco-conscious model for the business. Ultimately, he adds, Red Arrow's product line reflects the owners' preferences, which is rewarding - with risks. "... [W]e're banking on our tastes," he says. "We're optimistic, though. We believe the products we've curated are unlike anything else in Lafayette. It's an eclectic mix of goods for kids, women and men. Picture a cool Etsy shop that you can actually walk into."

A web designer, photographer, songwriter, community activist, ceramicist and former KRVS radio host, Jillian has quite the hat collection, figuratively. She may be best known for her role as vocalist and ukulele player with the popular all-woman roots/Americana band The Figs, a group that packed local venues and still performs from time to time. But most of her activities share a common binding agent: entrepreneurship.

"Bram and I always knew we wanted to have a store; we just didn't know what we wanted to sell," Jillian admits. "I just turned 30 a couple of months ago and thought, It's time to be a grown up now.'"

In truth, she began growing into her current entrepreneurial iteration a few years ago when she and Bram launched Parish Ink as more or less an Internet operation with a warehouse in the trunk of a car. After sharing space at a T-shirt shop on Lee Avenue downtown, the pair made the jump to the old Fun Shop location on Jefferson Street in 2011.

"We've done Parish Ink on kind of a cash basis the entire time, so we don't owe any money to anyone, and we've growing very organically, very grassroots," Jillian notes, adding that for Red Arrow they scouted locations and found the space in River Ranch comparable in price to other south side spaces that don't have the high-end RR prestige. "We didn't want to jump into a situation where we couldn't afford to be there."

The siblings recently hired a full-time employee to manage the downtown store, where Bram will continue to spend time after Red Arrow opens. Jillian will manage the River Ranch location with the help of a part-time employee, although the pair envisions a day when they can leave day-to-day operations to a staff.

"Ultimately our goal is to not so much work in our business as to work on our business," Jillian says. "We're hoping this is temporary and in a year's time we'll have someone managing that store as well, so we can focus on curating these products and making sure that we're growing."

When they knew it was time to expand, the Johnsons considered New Orleans as a second location, but ultimately decided the south side of Lafayette, which is so different from downtown and the north side, would be a better place to start. "Lafayette as you know is like two cities," Jillian observes. "You have the south side and the north side and never the twain shall meet; they're different entities, different demographics, there's just a whole different philosophy of life in some ways."

And Jillian, who lives in walking distance of her downtown business, will have to adopt a "whole different philosophy on life," at least temporarily, when she starts managing Red Arrow Workshop: Driving. A lot of driving.

"That's actually the saddest part," she admits. "We're really excited to be opening the new store, but I'm going to have to spend 45 minutes to an hour in the car every day."