Lafayette isn't waiting for the federal government to deal with the aftermath of Katrina. 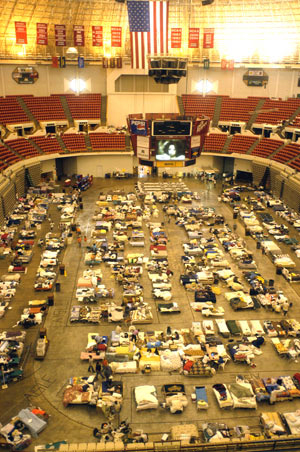 While the increased federal presence in the flooded city of New Orleans and the hurricane-ravaged surrounding parishes seems to be easing tensions on the Gulf Coast, federal assistance to those displaced by the hurricane and now living in Lafayette has been slow.

Nearly two weeks after the hurricane made landfall, FEMA set up a Disaster Recovery Center last Friday in Lafayette on Liberty Avenue. Two days earlier ' a week after the Cajundome was named an American Red Cross shelter ' FEMA set up a processing center with about 20 representatives at the Cajundome to process the 1,700 evacuees still living there.

Local officials say there has been little communication between the city and parish of Lafayette with state and federal government. In those few discussions, Lafayette is asking many questions, but getting few answers.

Cajundome Director Greg Davis says the facility is spending $100,000 a day to operate as a Red Cross shelter. "I'm assuming that we'll get some money back from the feds," says Davis. "What I don't know is how much of what we're spending they will cover." With little to no direction from FEMA, Davis is using the Cajundome's operating budget for housing evacuees. With an estimated final price tag of $6 million, the Cajundome could be bankrupt by this week.

"We've got systems that are running 24 hours a day, seven days a week that have never done that, many of which are 20-plus years old," Davis says. "They're breaking down a lot, and we're having to call in our technicians to do repairs to keep these things functioning."

Before Katrina hit land, Davis was already lobbying for money to make capital improvements to the Cajundome. He recently asked the Lafayette city-parish council for assistance in lobbying the state for $10.5 million to renovate the facility. Over the last three years, his requests to the state have been turned down.

The 40 Cajundome employees under Davis' direction have been retrained to operate the Cajundome as a shelter instead of an event facility. "The Cajundome staff is exhausted," he says. "I'm personally burnt out. I'm sitting here right now, and I'm trying to keep myself awake. Every 48 hours, we might get a couple hours of sleep."

On top of the physical fatigue of running the Cajundome as a 24-hour shelter, Davis is concerned with the Cajundome's looming financial crisis. "The only way we get money is if we're making money through event activity," he says. "There is no event activity; therefore, we're not getting any money to cover the normal operating costs. That's a problem we've presented to FEMA."

A sold-out concert at the Cajundome usually nets anywhere from $80,000 to $125,000 per event. The Cajundome will lose $400,000 in the next couple of months due to the loss of the events that have been canceled since the building was designated a shelter. Davis' estimates are based on the Cajundome's fiscal year ending Oct. 31, but he says that the facility could possibly still be used as a shelter past that date.

All the negotiations for upcoming concerts and events have ceased. "No promoter in his right mind is going to think he's going to bring a concert here in October," Davis says. "Odds are that we're still going to be a shelter."

Davis met with FEMA officials one week after the Cajundome became a Red Cross shelter. Although he says there were discussions about finances, he's uncertain as to what FEMA will and won't reimburse the Cajundome. "I don't know how that's going to shake out," he says. "It's one big mess, man."

Davis isn't relying on FEMA to ensure the Cajundome's financial stability. He is in negotiations with local banks to secure loans for the facility's operations. "We need someone to cashflow the operation until we're able to know where the money's going to come from," he says.

Davis isn't the only who's asking: Where's the money? Local and state officials and evacuees, who heard of $2,000 debit cards being issued at the Astrodome in Houston, are asking the same questions.

On Friday, Sept. 9, after touring the Cajundome, both U.S. Rep. Charles Boustany and U.S. Sen. David Vitter told The Advocate they were dissatisfied with the disbursement of aid that FEMA has promised is on its way to evacuees. That same day, FEMA Director Michael Brown, who had been sharply criticized for his management of the disaster, was relieved of his duties overseeing relief efforts and was replaced by Coast Guard Vice Adm. Thad Allen.

On Friday, despite having set up a news desk for media inquiries, FEMA still seems uncertain of its role in Lafayette. FEMA spokesman Win Henderson was unaware that FEMA had set up an assistance location inside the Cajundome for those living in the Red Cross shelter. Nor can he answer how much ' if any ' money has been dispersed to evacuees now living in Lafayette. However, Henderson does say that FEMA will make financial assistance available to evacuees (not by debit cards) but by checks sent through the mail and direct deposits into checking accounts.

FEMA is also searching for rental properties in the area to assist evacuees with temporary housing needs. "We're also looking for large tracts of land," Henderson adds, "where we can establish temporary mobile home parks for evacuees, and those take a few weeks to develop." The parks could serve as temporary housing for up to 18 months.

"We may have to go that route on a temporary basis," says Walter Guillory, director of the Lafayette Housing Authority. But Guillory doesn't believe the camper cities will be the answer to the housing shortage in Lafayette and throughout the state. "We're looking at long-range assistance for these people."

Guillory is seeking a $1.5 billion grant from the federal government to provide housing for more than 150,000 families who have been left homeless after Katrina. The immediate goal is to get evacuees enrolled with the Section 8 housing program that allows for the housing authority to pay a portion of the tenants' rent based on their income. The new grant would allow tenants one year rent-free while moving them toward home ownership.

Guillory has the support of Lafayette City-Parish President Joey Durel. "I think everybody's goal is to get the people out of shelters as quickly as we can," says Durel. "The next step is to get them assimilated into this community or wherever else they might end up going."

Durel says a few discussions with both FEMA and the state government haven't been fruitful. "Now if you start talking about organizations like FEMA," he says, "it's obviously something that leaves a lot to be desired. But I keep telling myself that this is the greatest natural disaster in the history of America. So while they might have planned for a typical hurricane, this is something that nobody was prepared for."

Durel isn't waiting for directives from the state or federal levels to address the immediate and long-term issues facing Lafayette. He has formed task forces comprised of local business, civic and government leaders to address the issues of health care, finances, infrastructure, housing and traffic.

"Whether we want to talk about it or not at this stage, because it might feel a little uncomfortable to do so in light of this tragedy we're witnessing, Lafayette and other communities around the state are going to go through some changes," Durel says. "So we can either react to them as they happen, or we can get proactive and try to do a better job for our community and a better job for the new Lafayette."