Tracking the continuing odyssey of a resourceful 6-year-old who was separated from his family for days after Hurricane Katrina. 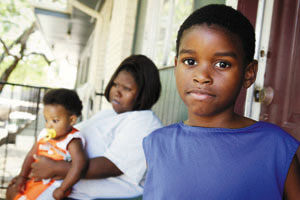 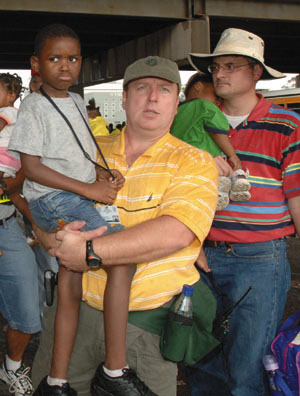 His smile was so big you could see the gums above his upper teeth.

It was Thursday about 1 p.m., three days after the levees broke and sent flood waters rushing into New Orleans. He was at the Causeway Boulevard-Interstate 10 staging area in Metairie, a cesspool of a makeshift triage and transportation center for New Orleans area residents who had just been rescued by air and boat and had no idea where buses would take them.

In the filth and trash spread across the sprawling intersection were fire department and ambulance personnel hovering over a group of seven children. One Acadian Ambulance medic clutched a 2-year-old girl like she was his own. Amid the sea of rescued residents packed like sardines against metal barriers were the workers' worried faces ' nobody seemed to know anything about these kids. Clearly oblivious to the tragedy unfolding around him, the oldest boy with the big smile was mature enough to hold his 5-month-old brother close to him and try to keep the other kids together and calm. He was 6 years old, and energetically told me his name ' De'Monté Carlos Love ' and confirmed its spelling. He knew his address, 3223 Third St., along with an apartment and phone number.

He had been dropped off by a helicopter with six children, ranging from 3 years to 5 months. The only information I could get was that a female neighbor had arrived with the band of children, most still in diapers, but now could not be located. Later we discovered she had turned them over to officials so she could board a bus out of that hell with her own two children.

Where had these children come from? What was their connection to each other? Were they abandoned? That was hard to fathom. Most had clean clothes, and the girls had neatly braided hair. Had their parents been rescued? We imagined the worst as the sun began setting on the sweltering day and we left for the Louis Armstrong International Airport, a similarly dismal scene of scattered bodies ' mostly elderly patients awaiting transport out of the city.

I never saw De'Monté Carlos Love again after that living nightmare on I-10, and I could never forget his smile. Where did he go?

First there was Time magazine's Local Hero of the Year award in December 2005, then special recognition at the 2006 Trumpet Awards in Atlanta where Stevie Wonder was the top honoree, and more recently the National Center for Missing and Exploited Children's Hope Award in Washington, D.C. But all of the publicity in the world hasn't brought little De'Monté any closer to where he wants to be. The 7-year-old just wants to go home.

"He misses his friends," says Catrina Love Williams, De'Monté's mom. "It was much better in Louisiana. It was familiar."

Now living in San Antonio, where the family fled days after Hurricane Katrina ravaged their city, 27-year-old Catrina has just started working at Wal-Mart where she clears $680 every two weeks. Her husband, Darryl, a former furniture-maker at a New Orleans factory, had a minimum wage job at a pizza restaurant in San Antonio that didn't work out. He's looking for a new job with better pay but has been taking care of his stepson, De'Monté, and the couple's 17-month-old son, Da'Roneal, while Catrina works. Their monthly rent is $702.

Their New Orleans' Central City apartment, where the Williamses paid $513 a month before the storm, is now $900, according to Catrina. The native New Orleanian worked as a cook at the convenience store Quick & Easy in Kenner, and though she'd been on leave for five months after a C-section and gall bladder surgery, she was planning to return to her job. Despite living in a blighted neighborhood only a couple of blocks from one of the Crescent City's most violent streets, Catrina had worked her way off Welfare and life was good. So good that she also hopes to eventually return to New Orleans.

"I know there's not nothing in New Orleans, to know now that it's not going to be the same," she says. "In New Orleans the rent wasn't high. We could pay the rent. But if I can't pay $700, I certainly can't pay $900," says Catrina. "We're basically out here in the middle of nowhere. That's what it feels like. I just feel like I can't make it out here. We're trying."

For now, Catrina and Darryl are staying put in San Antonio, still haunted by the four long days they waited before being reunited with their children.

Before Hurricane Katrina hit, Catrina and Darryl, along with Catrina's father and her sister Felecia Love, who has two young children, had gathered in the Williamses' apartment intending to ride out the storm. But with the electricity out for several days and waters not receding, panic was setting in. By Thursday morning, they were ready to get out. When a rescue helicopter hovered overhead around noon on Thursday, Catrina says an apartment worker told a group of parents the chopper was taking children only and would bring them to a city in Texas. Though at first they refused, the five mothers eventually relented, and their seven children were hoisted from the third floor balcony to the rooftop.

The decision to be separated from their children was particularly difficult for the Love sisters, who 15 months earlier had suffered the loss of Felecia's 2-year-old son in an accidental fire set by De'Monté in the apartment the two families shared in New Orleans. The book Waters Dark and Deep: One New Orleans Family's Rescue Amid the Devastation of Hurricane Katrina, written by Newsday reporter Katie Thomas only a few months after the storm, details the family members' struggle to rebuild their lives in the aftermath of the fire. Because of the toddler's death, the sisters drifted apart and eventually moved into different apartment complexes in Central City.

Though he promised to come back for the parents, the pilot didn't return, and it wasn't until much later that afternoon that they were rescued by another helicopter and dropped at New Orleans' Lakefront Airport. On Friday they were flown by helicopter to the Louis Armstrong International Airport in Kenner, where they boarded a plane destined for San Antonio.

The Acadian medic, Robert Clement, told me that Friday morning that the children had been taken by ambulance to Baton Rouge where the Department of Social Services would take over their case. Clement was in tears as he handed over the young girl.

In Baton Rouge, De'Monté provided extensive details to relief workers, who only paused when he told them his mother was named Catrina. Various organizations like the Virginia-based National Center for Missing and Exploited Children worked to help reunite them with their parents. After being showered with attention, toys and clothing from the local Big Buddy program, a mentoring organization whose workers cared for the seven children, they were driven to Lafayette Regional Airport Sunday afternoon and flown to San Antonio International Airport, where their tearful reunion was nationally televised that evening.

Catrina Williams is making a concerted effort to fit into her new community. She initially lived in a hotel and is now in her second apartment; she and Felecia again live in the same complex, though they have separate units. They're in a suburban neighborhood, a racially balanced community with a black, white and Hispanic population. She is trying to downsize to a two-bedroom apartment ' her 16-year-old sister who was living with her after the storm has since run away from home ' but none are available. Living paycheck to paycheck, the Williamses have been late on the rent and are paying late fees. The landlord is getting antsy.

A van was donated to the family, but Catrina's still learning to drive ' and acknowledges she's not very good at it. "I think I need to go to driving school first," she says with a laugh. Darryl also doesn't drive, so she takes the bus to work just as she did in New Orleans. "You see, in New Orleans we didn't have to drive," Catrina says.

De'Monté has stayed in touch with Big Buddy employee Derrick Robertson, with whom he developed a close bond while in Baton Rouge. "He inspired me; he really touched my life," says Robertson, who rarely left De'Monté's side in Baton Rouge and also made the road trip with him to the Lafayette airport.

For most of the summer the 7-year-old stayed inside the apartment playing Nintendo and other games but is beginning to make some friends in his neighborhood. "He goes outside very rarely," his mom says. De'Monté was scheduled to start school this week (he's missing a required immunization), and Catrina hopes he'll find more friends his age.

In May, De'Monté finished first grade at Harmony Hills Elementary in San Antonio, but because of the family's recent move to a different district will be attending yet another new school, Eduardo Villarreal Elementary. Catrina says the New Orleans school where he attended kindergarten shut down because of its dismal academic performance, and he had just transferred to another school when the storm hit.

"He does good in school; he makes real good grades," Catrina says.

Though they can't shake the urge to return to New Orleans, Catrina says San Antonio might offer her children opportunities New Orleans did not; for one, they're in a much safer neighborhood, and the new school is a big plus. Located in San Antonio's Northside Independent School District, the predominantly Hispanic Villarreal is a "recognized" campus, only one step down from Texas' highest "exemplary" academic rating, says Principal Lori Gallegos, who last week said she was anxious to welcome De'Monté to her campus. "We are aware of his situation," she says. "We had several students that came from Louisiana last year, and they were just a great addition to our community."

Still, Catrina worries about meeting the rent and utilities: "The thing is are we going to be able to stay [in that school]?" she asks.

The family is faring better than most of the 250,000 hurricane evacuees living in Texas ' almost 60 percent don't have jobs. Additionally, a Texas-funded Gallup survey, scheduled to be released in early September, found that 41 percent of the households (81 percent of the evacuees are African-American) have monthly incomes less than $500, according to the Houston Chronicle. Though it was a destination city for people fleeing Katrina, San Antonio took in a relatively small number of evacuees, less than 35,000, and still has an estimated 15,000 displaced residents, according to a recent study by the non-profit Appleseed Foundation. Many were those who had to be rescued.

The Williamses' FEMA relief lasted nine months, and the only government assistance they now get is through the Food Stamp program. Catrina, who is diabetic and had to be hospitalized in San Antonio with high blood pressure, will get health benefits at Wal-Mart after a year. "I just started this job; that's why I'm in such a hole," she says.

Catrina believes De'Monté hasn't been adversely affected by the tragedy of the storm; it turns out he was able to give such detailed information to rescue workers because she taught him what to say if her health problems caused a medical emergency. "It still hasn't hit him," Catrina notes. Sometimes he gets frustrated by the publicity and doesn't understand what all the fuss is about, or why he's called a hero. "He told me he kept his brother together and tried to keep the other kids quiet, 'keep 'em quiet' is his words," she says. "He's just a child, that's all I can say."