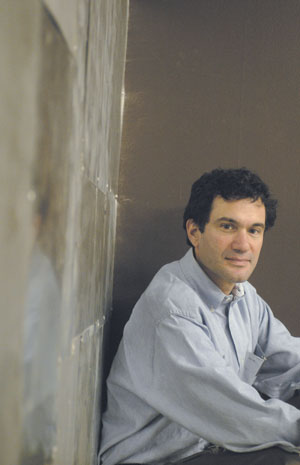 Long before the benches had armrests and decades before President Bush ever used it as a backdrop to make promises to the nation, Charlie Smith held forth regularly in New Orleans' Jackson Square, embodying its creative class and selling poetry to tourists. "That was a minimalist existence," Smith says of his seven years as a semi-starving artist, "but I didn't get skinny."

The 2005 hurricanes have brought additional weight to Smith's work and mission. "I have felt compelled to write more," he says. "As an artist, you get something out of times like these. Disasters are conducive to all forms of art. Most of it is born of chaos and conflict anyway."

These days, Smith dons a suit for his craft. With his dangling earring, wild white hair and shiny bald head, he lobbies the Legislature on behalf of the Louisiana Partnership for the Arts, a public-private advocacy group. He still has street smarts and a gritty bravado, but it softens with the sound of his measured delivery.

He's among the brave souls that killed the message of "art for art's sake" around the State Capitol a few years back, opting instead for a beefier "art for the economy" credo. Smith can banter on for hours about art driving tourism, creating jobs and generating tax dollars, but he knows there's not a lot of that happening right now. "We're facing some really tough times," he says. "Most of the artists in Louisiana depend on tourism, and it's just not there. People don't look at art as a business, but it is. We're all going to be suffering for awhile."

Even though Katrina and Rita have created new needs on the regional level, public funding for the arts ' from state and federal sources ' has remained virtually unchanged over the past year. With no additional money on the way, regional arts councils are being pushed to become more self-sustainable and to diversify their sources of income.

At the Acadiana Arts Council, officials are reassessing its services and programs in an effort to accommodate all the new patrons and artists that have relocated to the region. Executive Director Buddy Palmer says performance shows have been selling out, program attendance has doubled in some cases and child registration is on the rise. "Public funding doesn't address some of the new activity we have experienced," Palmer says. "There is a new definition of need in the wake of Katrina and Rita. We have people looking for things to do here that they did back home, and there are also displaced artists. The energy of the community has changed, and our needs are greater."

The Acadiana Arts Council receives roughly $270,000 a year from the state, based on a per capita formula. That means the region should receive a financial boost following the 2010 census, which is expected to show more residents in the region. That anticipated growth is offset, however, by the upcoming expiration of a three-year cooperative endeavor agreement with the Lafayette Downtown Development Authority. The deal nets about $100,000 annually for the council through monthly payments, but it comes to an end in September 2007.

"We had a board retreat recently where we talked about all of our pending financial needs," Palmer says. "And while we don't have a solution in place today, we are working on it and know we have a looming deadline."

As the region continues to deal with these challenges, Veronique Le Melle, executive director of the state Division of the Arts, is pushing the council to use its own cash for growth and to lean heavier on private sources. She hopes this strategy will bolster the regional infrastructure so a city like Lafayette might be better suited in the future to handle displaced artists following a disaster. "We are starting to turn to more investment'minded funding," Le Melle says. "We want [the regional centers] to put on their own shows and to invest in their own infrastructure. If we can be better prepared to help artists move into another region during times like these, we won't be losing them to other states."

While searching for alternative funding sources is usually a good idea under any situation, Le Melle says it's now a survival tactic. On the federal level, the National Endowment for the Arts, an independent funding agency, initially sent a small amount of emergency money to regional directors, but it virtually went unnoticed. Additionally, the NEA helped shore up an arts relief fund overseen by the division, but Le Melle says all of the federal arts funding sent to Louisiana thus far has remained "about even" compared to previous years.

On the state level, the Legislature has set aside $4.7 million for the Division of the Arts for the current fiscal year, which is about $100,000 less than last year and almost half a million dollars less than the $5.1 million budget the division had in 2001. Half of all state money dedicated to the arts trickles down to parishes based on population numbers, and the other half goes into direct grants.

One of the reasons arts funding is presently stable in Louisiana is because officials found $750 million in new cash earlier this year ' mainly from sales taxes and gambling revenues ' and it was immediately pumped into the operating budget. The post-storm boom, however, won't last long, according to some studies and forecasts. Le Melle and Smith acknowledge it's a possibility that major cuts are around the corner, and it's unknown how that might impact arts funding.

"It depends on how we keep up with our grassroots," Smith says. "If we do nothing, we will be cut more. But we are no longer in the habit of just saying, 'Please don't cut us.' As long as any cut is proportionate, then I can't complain because the arts will be in the same boat as everyone else."