City-Parish Council adopts a new expense policy, but not every councilman's happy about it. 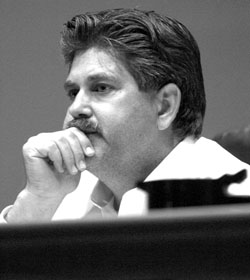 Just as several Lafayette city-parish councilmen prepare to fly to the beaches of Hawaii this summer for a government convention ' and public concern rises over councilmen tapping tax dollars for their expenses ' the council has adopted a policy to keep a tighter leash on its spending.

Most council members say the new policy, developed by a special council committee over the past five months, should help public perception of how tax dollars are spent. But Councilman Chris Williams dismisses the new policies and procedures manual as petty public relations.

"I think it's just blowing smoke at the public," Williams says. "It may make people forget about Hawaii, but it just doesn't have anything that substantive in it. If the public buys it, I guess they'll feel better about their tax dollars."

Earlier this month, city firefighters showed up at a council meeting in Hawaiian shirts to protest how the council downgraded the firefighters' pay plan while five of the council's nine members planned to attend a county government meeting in Hawaii this July. (All councilmen are granted just more than $4,000 annually for their job-related travel expenses.)

The new PPM requires finance committee approval of any rental car expenses and puts tighter restrictions on meal reimbursements, including a strict no-alcohol policy. The regulations also put a monthly cap of $50 on all telecommunications expenses for councilmen, including their phone, fax and Internet expenses. Williams and Councilmen Lenwood Broussard and Dale Bourgeois are the only council members who collect on their cell phone expenses. Last December, Broussard's cell phone tab alone was $119. Williams and Broussard topped all other council members in 2003 with expenses totaling more than $6,000 each. Broussard's expenses that year included an $80 meal at Hooters with other council members and staff to celebrate passing the 2003-2004 budget.

"I felt we just needed to firm up the guidelines," says Councilman Bruce Conque, who first suggested the council review its expense reimbursement policy last year. "I think it assures the tax payers of the parish more accountability than they've had in the past on how we spend public dollars."

Conque says the committee ' which includes himself, Williams, Marc Mouton and Dale Bourgeois ' developed the new rules by looking at the policies in place for other state and parish officials. Menard forwarded the final draft to all council members. Menard says the council adopted the PPM after six members signed off on it last week. Those councilmen include Menard, Conque, Bourgeois, Mouton, Rob Stevenson and Bobby Badeaux.

Williams says the final draft was not a committee report since he was still reviewing the document for changes when it was adopted. He wanted to revisit the telecom expenses and ensure all government employees outside the council were subject to the same rules.