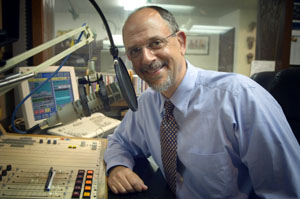 cadiana residents who regularly tune into local radio station 88.7 KRVS or watch Louisiana Public Broadcasting know the fundraising pleas by heart: if they don't support public broadcasting with their financial contributions, the medium could cease to exist. It's a mantra that's repeated relentlessly during the stations' annual pledge drives, but when Congress considered a plan last month to begin phasing out public broadcasting's federal funding, the airwaves were filled with disc jockeys, television show hosts and public broadcasting executives with a united message: we're being threatened like never before.

Locally and nationally, public broadcast supporters sent a clear message, flooding congressmen with phone calls and e-mails expressing their support for the Corporation for Public Broadcasting. Congress responded by restoring $100 million to the CPB ' money that filters down directly to local stations ' but public stations in Louisiana fear they are still at risk.

"It's not only making keeping the status quo hard, but it's going to be very difficult to plan for the future," says Beth Courtney, president of Louisiana Public Broadcasting and a member of the CPB board. "We're already short of money. We really are always on a shoestring with everything that we do."

Mark Bacon, a local graphic designer who hosts four shows on KRVS, says he was shocked when he found about the CPB funding crisis. "My first reaction was outrage," he says. Also a local organizer for the national Democratic activist network MoveOn.org, Bacon began rallying support locally for people to call their congressmen. Bacon says Lafayette is sharply divided when it comes to support of the federal government's use of tax dollars to subsidize public broadcasting, and that the split often falls down party lines.

"Many prominent Republicans here in Lafayette told me that if NPR was so successful, why couldn't they sell ads like everyone else?" Bacon says.

According to Courtney, that response is much like an argument she often hears in Washington. She says Congress tends to think of CPB as a big network, such as National Public Radio. In fact, the majority of CPB's funding goes to small stations like KRVS and LPB, which in turn purchase some of their programming from NPR and PBS.

By and large, Louisiana's delegation did not support restoring funds to CPB. U.S. Rep. Charles Boustany voted against the amendment along with fellow Louisiana Republican Reps. Bobby Jindal, Jim McCrery, and Richard Baker. After the amendment passed, Boustany did vote for the overall budget package, which includes the restored CPB funding. Louisiana Republican Congressman Rodney Alexander joined Democratic Congressmen Bill Jefferson and Charles Melancon in voting for the amendment to restore CPB funds.

Boustany's office released a statement saying the congressman did not support the original amendment because it transferred funds out of other worthy programs and that federal funding amounts to a relatively small percent of the budget for public stations like KRVS.

Courtney doesn't anticipate public broadcasting's budgeting battles to get any easier. She says CPB has been "high profile" ever since former Speaker of the House Newt Gingrich first proposed eliminating federal aid to public stations in the mid-90s.

"In general, funding is very tight with Homeland Security and No Child Left Behind and everything else going on right now," Courtney says.

Most troubling for Courtney is that part of the impetus for the cuts to CPB appears to be politically motivated. The CPB board's own chairman, Kenneth Tomlinson, has accused syndicated news programs on National Public Radio and PBS of having a liberal bias. Tomlinson is now under investigation by CPB for his hiring of Republican officials, without the approval of the CPB board, to monitor the political balance of public broadcast programs.

"I thought it was inappropriate," says Courtney, who sits on the CPB board. "You can watch the programs yourself. Why would he pay somebody? I told Tomlinson if he wanted to win an argument with [PBS President] Pat Mitchell he should have paid for the study himself. This is taxpayer money."

Station managers Dave Spizale of KRVS and Jim Engster of WRKF Baton Rouge (Engster is also a political columnist for The Independent Weekly) say Tomlinson was conspicuously quiet as the CPB budget cuts were coming down. "The feeling is that he could be a much better advocate for public broadcasting," Spizale says.

Further troubling for public broadcast stations was Tomlinson's choice of Patricia Harrison, former co-chairwoman of the Republican National Committee, to be the organization's new president and chief executive. Harrison was approved by the CPB board two weeks ago.

Courtney, a registered independent and one of three members of the eight-member CPB board who is not Republican, was one of the few who voted against Harrison's appointment.

"It was because of the position she had held, not because of her personally," says Courtney, adding she was inundated with calls from local stations asking her not to support a partisan CPB president. "I just thought it was inappropriate to have the former chair of the Republican National Committee. We're supposed to be a heat shield for any political interference."

Courtney says it is a constant struggle in Washington to keep politics from interfering with public broadcasting's mission.

"We're going to try to make sure we remain nonpartisan. We need to make sure we have Republican and Democratic support. That's certainly true in Louisiana and it should be true in Washington. Inside the Washington beltway it's interesting the things that people will use as a lightning rod, and we don't want to be a lightning rod. It's a tough road."

The recent CPB budget scare is the closest Congress has come to reversing its support of noncommercial media. The proposed cuts to CPB were part of an appropriations subcommittee plan to completely phase out federal funding to CPB over the next two years. In light of federal deficit concerns, Congress has been struggling to find areas where it can trim spending.

Public radio stations like KRVS count on CPB for an average of 15 percent of their overall budget, through fluctuating allocations.

Spizale says that while the $80,000 that KRVS received from CPB last year is only a fraction of his station's overall $500,000 budget, all of the CPB money goes into KRVS' $100,000 programming budget.

Likewise, of LPB's $11 million budget, less than $1 million comes from federal tax dollars, though all of that money goes to programming. LPB gets approximately $5 million from the state, with the rest coming from private donations, underwriting and grants.

While KRVS appears to have escaped the funding cuts, LPB is still facing the possibility that it could lose $200,000 worth of program grants next year. A total of $102 million in federal grant money, mainly applying to public TV, has been cut by the U.S. House. This week, the Senate appropriations committee is scheduled to hold its hearings on the cuts and is also expected to ponder the long-term funding of public broadcasting.

For LPB, the funds now on the cutting board could result in the loss of a $50,000 annual grant that goes to workshops tied to the state's Head Start pre-kindergarten education program. "In Louisiana, that's really where we're focused right now," says Courtney. "Early childhood development, that's what we need and it's what parents want."

Part of these federal Ready To Learn program grants also go to fund child education programs such as Sesame Street and Reading Rainbow.

Other cuts cancel funding for grants intended to upgrade public TV's satellite system and for the digital conversion of both public TV and radio ' something mandated by the federal government.

With costs for expensive camera and production equipment on the rise, Courtney says the grant money now coming in already isn't enough. "It's such a critical transition time right now [for broadcast stations]," she says.

KRVS has received federal funds for its digital conversion. Last week, the station began putting out a digital high-definition signal along with its analog broadcast. The digital broadcast will offer CD-quality sound to listeners picking up the station through digital receivers, which are slated to hit the market this fall.

KRVS also is hoping for federal matching funds (of about $200,000) to purchase digital equipment for its new home in UL Lafayette's addition to Burke Hawthorne Hall, which is set to begin construction this fall.

The grant KRVS will be applying for is funded by the Public Telecommunications and Facilities Program (PTFP). Courtney says PTFP funds have also meant approximately $8 million to LPB over the past 30 years, but that it is one of the budget items that Congress is continually looking at cutting back.

"I couldn't have put Lafayette on the air without PTFP money," she says. "As I go forward into the future, that could not be there at all."