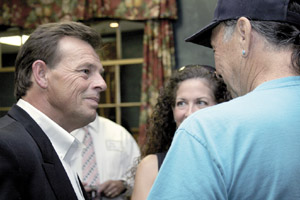 Every now and then, the Baton Rouge chapter of the Pelican State Pachyderm Club, a social-networking group for Republicans, convinces a big political name to swing by its monthly dinner at Drusilla Seafood. It's a quiet setting where youthful activists rub elbows with the suburban demographic that fuels the heart of the party. There are nametags and conservative banter, practically all white faces, and, surprisingly, for one night only, a touch of Nashville glitz in the evening air. Many in attendance have cameras at the ready, including a few non-Pachyderms in search of radio glamor, and Sammy Kershaw poses for all takers. It's all old hand, but he does it deftly in a country-comes-to-town sort of way.

Scott Innes, a local country music disc jockey and professional voice actor ' he has voiced both Shaggy and Scooby Doo in several straight-to-video features ' places a red-and-black yard sign in Kershaw's hands and directs him to a corner of the banquet room. "Wait, wait," Kershaw says, fiddling with the sign. "You got to tilt it a little so it don't shine, right? We know how to do that kind of stuff in the business."

It's Hollywood, baby. Well, not really. It's the Hayride, cher, a completely different beast, but Kershaw insists he is serious and in it to win it. "We need some good leadership and someone to promote the state," he says. "My top priority will be ethics reform. You know, the first thing people want to talk about backstage after my shows is corruption in Louisiana. I want to change that. That's why I'm running."

A native and resident of Vermilion Parish, Kershaw topped country music charts during the 1990s and has been on the public radar ever since. In 2001, he married Lorrie Morgan, a sultry crooner with comparable chops in the twang biz, thus gifting the tabloids with another star-crossed couple to cover. These days, though, Kershaw is running for lieutenant governor as a Republican. He says he is fully aware that his celebrity ' and nothing else ' serves as his entry point to most voters, as compared to a central campaign theme or plank.

When folks on the campaign trail ask for a song, Kershaw obliges (he prefers Randy Newman's "Louisiana 1927"). Earlier in his Baton Rouge swing, Kershaw forgot the final word in "God Bless America" during a performance at a candidate forum, but he still rocked it harder than any other pol, which is easy to do when you're the lone rocker. "When I'm on stage for an hour and a half, it's my stage and I talk about what I want to talk about. It's all about promoting the state and I've been promoting this state for 20 years and I'll keep doing it. I'll be talking about positive stuff up there," says Kershaw, who has 17 tour dates remaining for the year, almost exclusively in southern states, according to his Web site.

Theatrics aside, Kershaw has ideas ' big ideas. He communicates them in a forceful way, as strictly business, which could come in handy when dealing with gruff lawmakers. Kershaw wants to revive the old Louisiana Hayride, a national radio and touring show from 1948 to 1960 that boasted the likes of Elvis Presley and Hank Williams. In its heyday, it launched careers and held as much sway as the Grand Ole Opry. Performances could be staged on a 24-hour television network owned by the state that "showcases Louisiana all day long," competing against other channels on satellite or other means. The concept might give lawmakers pause, however, especially with the Football Network still fresh in their minds. In 2005, the state provided millions of dollars in subsidies to the Baton Rouge-based channel, only to watch it flounder months after being launched.

Kershaw also recommends putting more advertising dollars into hunting and fishing promotions, restoring old theaters and spending as much money on other areas of the state as New Orleans traditionally enjoys. He says he knows of "hundreds of places" where retirement communities could be built alongside Louisiana lakes and envisions a Branson-like tourist trap environment that could come up alongside the burgeoning music industry he foretells. "I just found out they are building a huge water park in Rayne," Kershaw says. "There's the anchor for the city. We're talking real money here ' folding money."

And then there's the tabloid gossip, which has been scooped up by the mainstream press recently. Kershaw filed for Chapter 13 bankruptcy in February for an amount ranging from $100,001 to $1 million ' court documents only specify broad ranges. The debts are primarily business-related, linked to the Sammy Kershaw Fan Club, Samuel P. Kershaw Foundation of Acadiana, SJB Inc. and Hotchickens.com, a restaurant business that went bust. The proceedings revealed the debts are owed to banks, credit card companies, lawyers, the Internal Revenue Service and others.

Morgan, meanwhile, has confirmed to CNN's Larry King that she formerly dated Fred Thompson before marrying Kershaw. Thompson, a former U.S. senator and working actor from Tennessee, is vying to become the Republican candidate for president and has led many all-GOP polls, although at press time he had not yet entered the race. But for now, Kershaw has other names to worry about.

Lt. Gov. Mitch Landrieu, a Crescent City Democrat, is running for re-election with $477,000 in the bank. He has yet to lift a finger to do any heavy fund raising, and his political organization is leaps ahead of Kershaw. State Rep. Gary Beard, a Baton Rouge Republican, has likewise expressed interest in running but has been facing media scrutiny and a lawsuit from a Lafayette company in connection with his company's dealings with state-sponsored movie tax credits. The lingering questions surely put Kershaw in a better place politically as a Republican contender than he was earlier this year.

Kershaw only has about $100,000 in his campaign war chest, but a number of "high-ticket" events are on the books and money should be coming in soon, he says. Commercials have already been cut, he adds, and the volunteer list has swollen to 800 names. Sure, he's following in the footsteps of country singer Jimmie Davis, who ultimately became governor, and Cajun fiddle master Doug Kershaw, his third cousin who also made a bid, unsuccessfully, to become Louisiana's lieutenant governor, but Sammy Kershaw argues that he only wants to serve. If elected, he'll keep touring and playing music, he says, but his focus will shift to Louisiana's needs and not his own. "This is not a publicity stunt," he pleads. "I am not a career politician. I am very serious about this."