Displaced pets ' and their owners ' find comfort at Blackham Coliseum. 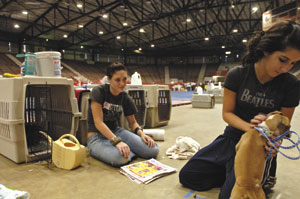 Up in the stands at Blackham Coliseum, Cecily Mouton tends to her two gray Schnauzers and three cats. She tries to let one of the cats out of its cage to walk around but is afraid it will run away. She puts it back in the cage. "I understand that you're crazy," she says to the cat. "We all are."

Mouton's area is filled with crates, stacks of newspapers, food and cleaning supplies. She evacuated from Central City in New Orleans the Sunday before Hurricane Katrina hit and caravanned to Lafayette for 14 hours with other people bringing their pets. She stayed with a relative the first couple days, then moved to the Cajundome. "I have five animals. It's a little much to be at somebody's house," she says.

Mouton wakes at dawn each morning to walk over to Blackham to feed her pets and walk the dogs in the yard around the coliseum. The shelter opens at 6:30 a.m., and pet owners are required to care for their animals. "These are my children," says Mouton. "I would like to be here all day long, but I need to take care of business, too."

Blackham Coliseum opened as an animal shelter on Tuesday, Aug. 30. It was set up as part of the LSU School of Veterinary Medicine's network of shelters around the state and is staffed by veterinarian Renée Poirrier's office. On Sept. 3, the American Humane Association was brought in to relieve Poirrier and her staff and manage the shelter.

Dick Green, director of the association's emergency services division, sleeps in a rig parked just inside the gates on Coliseum Boulevard, along with his team of nine rescue workers. "We respond to disasters on site where local authorities are overwhelmed," he says. He's cared for animals at more than 20 disaster sites, including the Sri Lanka tsunami and mudslides in Venezuela. "This certainly is one of the larger ones," he says.

Green says Lafayette's makeshift animal shelter is a model one. "This particular shelter setup is one of the best I've seen. Having people so close to their animals, it's made our job very easy," he says. The shelter is at about 50 percent capacity, with more than 200 animals, most of them dogs, but also cats and birds. In addition to owner involvement, Green says the shelter has worked so well because of its resources such as air conditioning, phones and Internet service, as well as its proximity to the Cajundome.

Over a 24-hour period, Green coordinated getting office furniture for the building and two laptop computers so the staff can begin cataloguing the animals. He's also arranged for security details at night; even though the shelter closes at 8 p.m., an animal was stolen the previous night.

Inside, two Animal Control officers are on site at all times. Volunteers and owners stream in and out, amid the sound of constant barking. Pets are arranged in cages and crates around the floor. Each animal receives an identification number, and a Polaroid photo is tacked up on the cinder block wall behind it. Animal families of brother and sister puppies and mothers and kittens are kept together, either in the same crate or right next to one another.

Because of Cecily Mouton's five animals, she was given her own space on the bleachers. A couple other animals are scattered around the stands. "I am so grateful they opened," she says. "Everyone has just been so gracious. I don't know that I'll be able to give back all that's been given. Right now, I'm homeless, but it's going to be OK."

Mouton brought pet supplies, like beds, bowls and food with her, but the shelter has no shortage of supplies. Paper towels are stacked inside the entrance, next to rows of Clorox bottles and other cleaning supplies. Outside, two rental trucks are overflowing with bags of dog food. "We get such an incredible response with food," says Green. "Water was a big issue but isn't anymore." Currently, the shelter is in need of extra large pens and crates. A poster board on the front door lists each day's needs, and volunteer sign-up sheets are taped to another door.

Green is focusing on taking the shelter to the next level now and preparing for the future. "We don't know how long this will go on," he says. "After Hurricane Floyd [in 1999], one of our shelters was open for six months." He doesn't think it will take that long but says they are preparing to stay open for 14 weeks. He's brought in a team from Nashville to take over, while he and his workers transfer to a shelter in Gonzales. He's also brought in a full-time vet from San Diego.

In addition to those stationed at the shelter, Green's team also includes people out in the waters in New Orleans rescuing animals. "There's going to be thousands of animals coming in from the field," he says, of which Blackham may have to absorb a few. The mandatory evacuations in New Orleans could also have a trickle-down effect on Lafayette, but Green says the shelter's structure won't change. "This shelter will always stay with that kind of setup," he says. "This shelter has a specific purpose to cohabitate owners in the dome and their dogs. I hope the rest of the country learns from them."