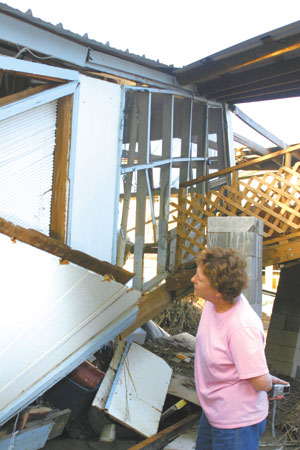 Precariously projecting out into the waters of Vermilion Bay, the community of Cypremort Point is no one's idea of safe harbor in a storm. But over the course of the past 40 years, when disastrous hurricanes were few and far between, residents and weekenders were lulled into complacency and invested money into luxurious camps. Rita changed all that, burying roads under mud, tossing boats on top of buildings and leveling structures.

"We had a decent span," says longtime Point resident Richard Legnon. "In 33 years, it's my third bad storm." Hurricane Lili washed mud into camps three years ago. But the storm surge and hurricane-force winds of Rita caused far more damage and have also changed the complexion of a dispute between land owner Cypremort Point Inc. and approximately 150 tenants, who have been fighting the company's increases in rent.

Tenants were notified last November that leases would rise in cost anywhere from 240-1,200 percent ("Point Taken," April 27). Many claimed they were unable to pay the new prices and unable to sell their camps, because no buyer wanted to take on the escalating costs of leasing the land. Following months of tension, CPI reversed its policy earlier this summer after an initial refusal to sell land that camp owners had been leasing for decades. Still, tenant organization Tenants at Cypremort Point filed suit against CPI on June 30, claiming that CPI was unjustly profiting through exorbitant rent increases.

In an August interview, CPI Development Manager Robert Guillotte said sales were brisk. "It's going very well. When you sign seven buy-sells in one day, that's a good business." Guillotte defended the corporation's pricing. "I'm selling property. If the property at Cypremort Point was overvalued, why would people who don't already have a camp want to buy property there? It's the recreational value you're buying. People need to understand that. You can't justify a man who goes fishing. You can go to the grocery store and buy fish a lot cheaper."

Realtor Frank Brown, who has been involved in Cypremort Point real estate for decades, said in August that those sales couldn't be compared to a traditional market. "The prices are high. It's not really an open market transaction. There's nothing you can do." On the flip side, he says that once people buy their lots, they will be encouraged to improve their camps, ultimately raising property values. "It's going to be good for Cypremort Point," he concluded.

The first 60 parcels were offered to tenants in March, April and May. Three sales were recorded in July at the St. Mary Parish courthouse: one Cove Row property for $100,000, and two located along Hwy. 319 fetched $40,000 and $31,000. Guillotte said he had more than 20 buy-sell agreements signed in early August. According to the St. Mary Parish Clerk of Court's office, there were three sales in August, nine in September and one in October.

The lawsuit was scheduled to go to court this fall, but after Rita caused massive destruction to many tenant's camps, attitudes have changed. "The people who bought, bought under duress," says TACP President Weldon Taquino. "They bought because they had a big investment. They bought because they had no choice. The people who bought at top dollar, I think they got screwed. People who want to buy now say there is a lot of negotiating going on after the storm."

Some lessees are putting thoughts of negotiation on hold while they ponder the costs of rebuilding. Ann Boutte's camp was knocked off its 10-foot pilings. The structure is so unstable neither the family nor the insurance adjuster is willing to go inside. Homeowner's insurance doesn't cover damage from rising water, and Boutte didn't have flood insurance.

"Do they [CPI] think we're going to buy the land and then rebuild the camp?" Boutte asks. Boutte contends that the land her camp stood on is swampland. She adds that if the coast keeps eroding, the land will be worth even less. "It was rumored that they're going to sell these lots for $40,000," she says. "No one has contacted us. If we were going to pay $40,000 for a piece of land, we'd buy it along the bayou in New Iberia. There's other land in other places."

The Bouttes haven't made any decisions. The level of destruction is still too raw in Ann's mind. "We had new furniture, every stick of it. A new side-by-side refrigerator, a new dishwasher ' I haven't even used it. The beds are still made with clean sheets. We just about lived here. It was nice while it lasted," she says with a sigh.

A renter since 1986, Gerald Adams' camp sustained considerable damage from the storm surge. He says he couldn't afford flood insurance. "I got to pull the roof off, and the inside's no good," he says. Adams has been through numerous storms: Andrew, Danny, Lili and Rita. He is willing to weather another hurricane ' under one condition. "If I owned the land, I'd stay. I'd improve this place. It's the only way I'll get my money out now. I heard this (lot) was selling for between $42,000 and $44,000. My lease is $4,200 a year. Do you think this place is worth that?" he grumbles. "If I leave, I'm going to take my camp with me," he says. "CPI ought to be out here talking to us. We're not getting a fair shake."

CPI's Guillotte declined to comment following Hurricane Rita, and CPI attorney Raymond Allain did not return a call for comment. Taquino contends that CPI is no longer in a position of power. For those with flood insurance, Taquino contends, the storm has created a way out of the dilemma. "Thirty, 40 people in the tenants group will take their insurance money and run," he says. But even if tenants didn't have insurance, the situation has changed. "People lost their investments. The pressure to buy the property has been greatly reduced," Taquino says. "It seems like Rita called [CPI's] bluff."