Bobby Jindal's honeymoon with the media is over ' his promises of ethical fastidiousness and rapid reform have set the bar so high that every hiccup is major news. 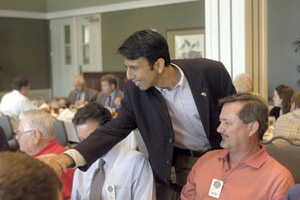 Although he isn't in office yet, Bobby Jindal is enjoying stratospheric approval ratings among voters. Many folks just plain like the governor-elect and his conservative mantras, and his track record as governor is still a blank slate. The guy has style, or at least a style, defined these days by an open collar, no tie and a nice blazer (on occasion wrinkled), the look Jindal donned during his campaign. And columnists and bloggers are pontificating, some theorizing that Jindal is laid back and comfortable in his power role and shows no need for pretense or pageantry.

But around and inside the tallest building in downtown Baton Rouge, things are already getting back to normal. Lawmakers are finding their voices again, media is paying close attention, and by all indications, Jindal's honeymoon among the insiders has ended.

Maybe it's because Jindal beat all his opponents handily in the primary, giving his administration a one-month jump on most governors who have to slug it out against a tough opponent in a runoff. More likely, Jindal set the bar so high with his promises of revolutionary reform that onlookers are hungry for immediate action. Political insiders ' and the public ' will only hand out so many passes and look the other way for so long.

Pockets of opposition have been sprouting up in increasing numbers over the past two months. During legislative sessions, teacher groups will take stands as the governor-elect pushes his plans to expanded charter schools and merit pay for educators; the teachers' union endorsed his opposition last year. Some lawmakers feel squeezed as well.

Rep. Damon Baldone, a Houma Democrat, was recently edged out of the race for speaker pro tem, the second-highest spot in the chamber, but was provided with the vice-chairmanship of the House Committee on Criminal Justice. Not long after, Speaker-designee Jim Tucker, an Algiers Republican, contacted members of the House vowing to support Rep. Karen Carter of New Orleans, a Democrat like Baldone, for the pro tem job. Jindal told lawmakers repeatedly last year that his leadership team would not interfere with the House elections as other governors have done. "It's obvious that the politics around here haven't changed," Baldone says. "That's why I'm just going to withdraw my name, even though this is supposed to be an elected position where legislators should be free to make their own choice."

Rep. Don Cazayoux, a Democrat from New Roads who was edged out of the race for speaker by Jindal and Tucker in similar fashion, was likewise left wondering what had happened to Jindal's vow to stay out of legislative leadership races and committee assignments. "We owed it the state to make every effort to try to elect a speaker independently, and we strongly believe independence is important to developing a more effective and responsive Legislature," Cazayoux says. "I wish the governor-elect had allowed the process to continue because many members were still undecided, and the momentum was turning in our favor."

Media reaction was swift. C.B. Forgotson, a Hammond attorney and one of the first political bloggers in Louisiana, pointed out that Louisiana law actually calls for an election in the House, not a statement to the media about who should be crowned. "Either the speaker made a mistake or accidentally revealed the truth," Forgotson says. "In either case, why have rules, if, like our laws, they are not obeyed by those who make them? Aristotle said, 'Good laws, if they are not obeyed, do not constitute good government.'"

Longtime political reporter and former editor Jim Beam recently wrote in his Lake Charles American Press column that "legislative independence may be just a pipe dream" and maybe Jindal needs to be prodded in the right direction. "Those of us who thought Jindal's election meant a new day was dawning in Baton Rouge are terribly disappointed at this latest turn of events," Beam wrote.

Jindal told voters his administration would be squeaky clean, which means even the slightest detour on that road will grab headlines. So all hell broke loose last month when Jindal named Jimmy Faircloth as his executive counsel. Questions immediately cropped up about Faircloth's firm, which represents the Coushatta tribe's casino, and his plans to continue his private practice. Faircloth later retracted that statement, promising to work for Jindal only.

The Baton Rouge Advocate weighed in with an editorial: "However well Faircloth conducts himself, his desire to return to the firm after his service in the governor's office will raise questions whenever any decision is made by Jindal involving gambling." Even though Jindal has designated a special lawyer to handle the issues and Faircloth has severed his private ties, those questions ' and other queries about Jindal's hand-picked allies and the looming special session for ethics reform ' will continue.