Creations by Heat just doesn't have the same ring, so Lafayette jewelry maker and newly minted entrepreneur Danielle Moss went with the catchier Creations by Fire. 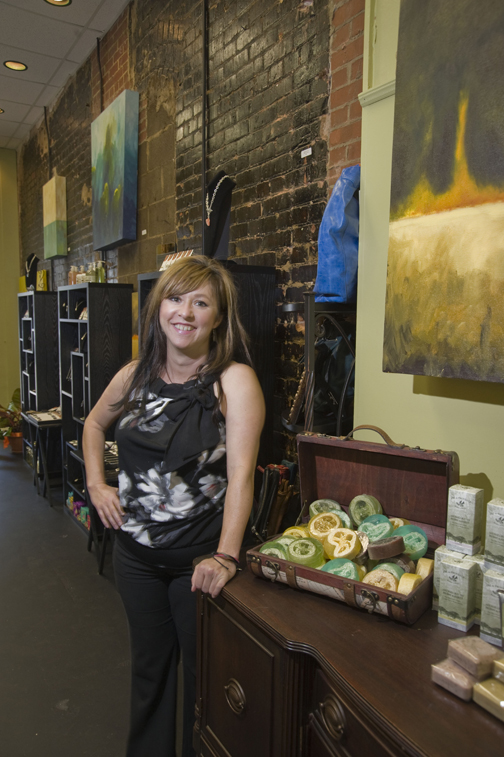 Creations by Heat just doesn't have the same ring, so Lafayette jewelry maker and newly minted entrepreneur Danielle Moss went with the catchier Creations by Fire. It's a close-enough moniker for the kiln-fired fused-glass and silver jewelry in which she specializes. Nestled between Jefferson Street and the atrium in Gordon Square downtown, the shop, which flipped its Open sign for the first time on July 6 and has already exceeded Moss' expectations, specializes in one-of-a-kind creations - Moss' unique, aquatic- and nature-inspired jewelry mainly, rounded out by soaps from Pass Christian Soap Company, Nouvelle Candles, a boutique candle maker based in Scott, aromatic loofah soaps and fine art by local artists.

"Ninety percent of everything in my shop is handmade," the UL alumna says.

A pharmaceutical salesperson by day who admits her comfortable salary made opening her first business "a no-brainer," Moss was stunned by the robust sales during the shop's first ArtWalk in July. She says the shop earned enough during the once-a-month event to pay all her August bills.

"My goal was for it to pay for itself, and it did in four hours on Saturday," Moss notes with evident pride. "But if it doesn't I can afford it with my day job."

Moss is keeping her day job for the time being and hired a part-timer to tend the store on Tuesdays, Wednesdays and Thursdays. She takes the helm on Fridays and Saturdays and admits her ideal is to one day be a full-time jewelry maker and merchant.

While she's been a pharmaceutical rep for 16 years, jewelry making has long been Moss' passion - a passion that was inspired by her grandmother, whom she says was an adept china painter. A few years ago the 1986 Teurlings graduate got the ahnvee to make jewelry again. She joined the Louisiana Crafts Guild, registered Creations by Fire LLC with the state and began selling her wares at fairs and festivals as well as doing commission pieces.

Near the end of May a serendipitous collision of impulse and opportunity occurred: "I really wasn't even looking to open up a shop," Moss recalls. "But I saw there was a space [in Gordon Square] and Memorial Day I called. I talked to [a leasing agent] at 9 o'clock in the morning - it was mine by 10 o'clock."

The Gordon space had been vacant for about a year, most recently occupied by a barber."It just fell into place," she adds. "I had about five or six weeks to get it ready."

Moss is currently lining up other crafts makers to sell their work on consignment and looking for visual artists to feature their work. Photographer Giorgio Russo will be the featured artist during August. And if the second Saturday of July was a bellwether, ArtWalk is shaping up to be her bread and butter.

"The main day will be ArtWalk, but when we have Downtown Alive! I can have these featured artists," Moss says. "If somebody wants to have their own show in a weekend that's not ArtWalk - that's what I want to do."