Tried and true, it might seem difficult to shake up a Southern tradition like fried shrimp, but Rachael's Café's Beaucoup Shrimp is a welcome variation. 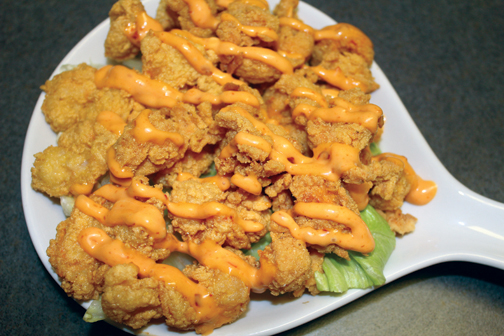 **Tried and true, it might seem difficult to shake up a Southern tradition like fried shrimp, but Rachael's Café's Beaucoup Shrimp is a welcome variation. The Dish of the Week includes fresh Gulf Coast shrimp, deveined, fried and drizzled with a spicy mayonnaise-based sauce. Served on a bed of crisp lettuce, the dish can serve as either an entrée or appetizer for $9.
Rachael's Cafe is a family-owned and -operated Cajun restaurant, where owner Rachael Hebert works alongside her two daughters, Kellie and Tiffany, and her sisters, Phyllis and Stephanie. The restaurant offers daily plate lunch specials and a full menu featuring favorites like gumbo, sandwiches, fresh seafood and burgers. Mention EatLafayette today, Aug. 15, and receive a free homemade bread pudding with purchase of an entrée (the EatLafayette campaign ends today).
Rachael's is located on 104-B Republic Ave. near Kaliste Saloom Road and is open for lunch Monday through Saturday from 10:30 a.m.-2 p.m. and dinner from 5-8 p.m. On Friday and Saturday, dinner hours extend to 9 p.m. - Katie Macdonald 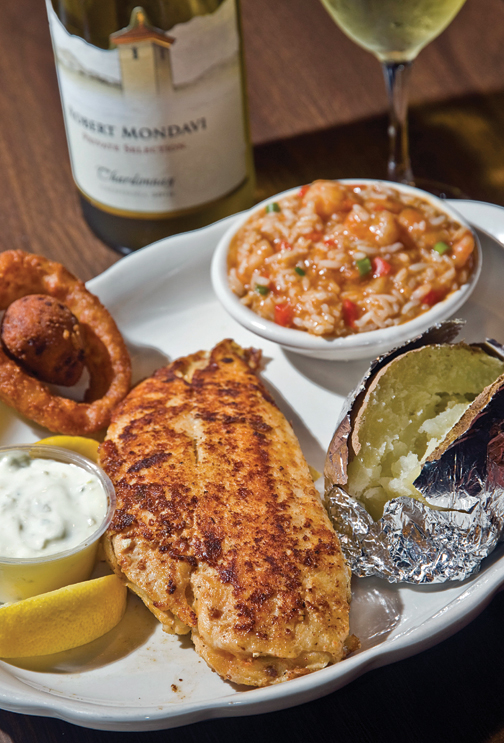 Lagneaux's, the self-purported King of Seafood, offers filet of flounder stuffed with shrimp and crab - one of its meals fit for a royal. Manager Sheila Green chose the Mondavi Private Selection 2010 chardonnay to pair with the flounder. Says Scott Holmes, the Mondavi representative for Republic National, "The concentrated citrus flavors of lemon, pineapple and peach complement this dish to accentuate the seafood flavors and provide a perfect balance to the dish." Accompanying the fish is a red seafood jambalaya with ample amounts of shrimp flecked with pieces of diced red bell pepper and green onion; a baked potato; and an onion ring and a hush puppy - a meal fit for two stomachs. For EatLafayette, Lagneaux's is offering a free bread pudding with choice of raspberry, rum or chocolate sauce with purchase of an éntrée. But you better get there quickly, as EatLafayette winds down today.
Lagneaux's has been in business for more than 40 years and offers a diverse menu, along with a seafood buffet of local favorites. It's also a meat market with specialty meats and take-home meals. Lagneaux's has plate lunches Monday through Friday, is open for lunch Sunday through Friday, and serves dinner Monday through Saturday. - Elizabeth Rose 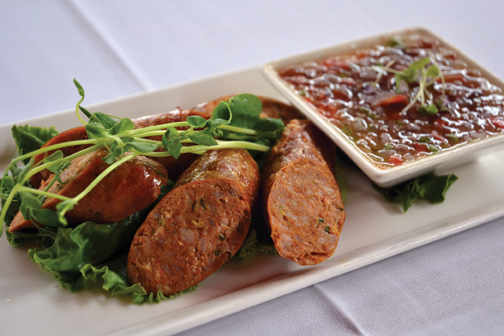 Muscadines, which are native to the southeastern U.S. and thrive on the Louisiana heat, are much sweeter than other grape varieties and are popular in Southern wines. Though muscadine season is September and October, the above-normal summer temperatures may be a contributing factor in the earlier availability. At Village Café, Executive Chef Jeremy Conner has created a dish that highlights the muscadine in a bacon-chili glaze for his alligator sausage, with the sweet muscadine providing a delicious contrast to the savory sausage and salty bacon. You can make the jelly yourself, Conner says, but he highly recommends buying from a farmers' market or grocer that stocks locally made products. "Lots of homemade jellies don't set really well," he says. "The local people who make them for a living really know how to get them to jell." And besides, any store that sells the alligator you need for this recipe probably has a selection of jellies made from fruits that are in season now, like muscadines, he says. The recipe below makes four servings, or you can visit Village Café for the original preparation.

DIRECTIONS
In a medium skillet, sauté bacon pieces until their remaining fat begins to render. Add onions and peppers and sauté until onions are translucent. Remove from heat and add muscadine jelly. Stir well to incorporate and place in a container in the refrigerator.

Grill sausage to desired doneness on charcoal grill. Allow to rest, then slice and serve with muscadine glaze for dipping. - Elizabeth Rose