The Acadiana Symphony Orchestra's former conductor, who moonlights as a purveyor of fine art, is reaching out to help a gifted young musician pursue his dreams in classical music.

In a magnanimous effort to help a gifted young musician, Dao Gifts & Fine Art in River Ranch has announced it will donate the proceeds of a painting to help UL Lafayette alumnus Roldon Brown cover the cost of board, food and transportation during his studies in Germany. Roldon, as The Ind reported recently, beat out scores of international competitors in July to secure a scholarship studying with acclaimed flutist Thaddeus Watson at the Frankfurt School of Music & Performing Arts. Brown will spend at least two years under Watson's tutelage, after which he hopes to become a professional flutist and teacher helping disadvantaged children pursue careers in classical music.

Brown, 26, is a 2008 honor graduate of the UL School of Music. He serves as an instructor with the ASO Conservatory and also performs with the ASO and the Rapides Symphony Orchestra. Roldon's stuttering and his economically disadvantaged childhood were chronicled in The Ind's September 2011 LivingIND cover story, "Magic Flute." Following publication of that story, several Ind readers contacted Brown and ultimately gave him the financial support to purchase a new, better flute - a purchase he credits with winning the Frankfurt competition this summer. 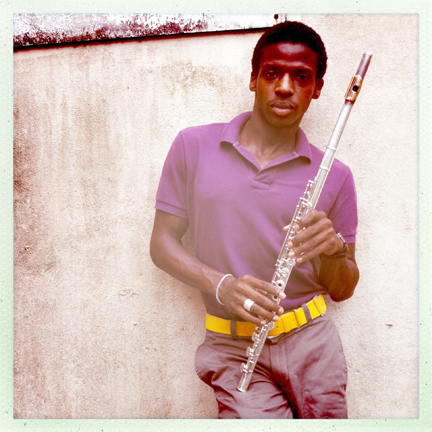 Maestro Li and family have maintained a home in Lafayette since his amicable departure from the ASO in 2002 following a 10-year tenure. For the last couple of years the Li family - Xiao-Lu, wife Yang Yang and daughters Jacqueline and Christina - have operated Dao Gifts & Fine Art in a quaint corner shop on Rue Promenade in River Ranch. The maestro spends a lot of time traveling - guest conducting and performing with symphonies (Xiao-Lu and Yang Yang are also gifted violinists) in the United States and abroad as well as engaging in international business deals - but his renowned generosity has made room for the talented young flutist who is set to fly to Germany Sept. 13.

To find out more about the painting, call Dao Gifts & Fine Art at (337) 326-4691. The shop is located at 110 Rue Promenade, Suite 102, in River Ranch. A separate fundraising campaign for Roldon is set to launch this week via social media; stay tuned to The Ind for details.