Last year, the Carencro institution Paul's Pirogue was close to permanently powering down the boilers. Not any more.

Restaurant Review
Back to a boil

With a change in leadership, this north Lafayette parish eatery is going ganbusters again.

Last year, the Carencro institution Paul's Pirogue was close to permanently powering down the boilers. The Angelle family operation was struggling to make a profit after 27 years of overwhelming success, and Paul Angelle Sr. made the decision to sell the restaurant.
Luckily, the family doesn't own the turn-of-the-century rustic building on St. Peter Street - they've leased it since opening in 1984 after they moved the restaurant from an abandoned fish market on the Bayou Teche in Arnaudville - so it was difficult to garner buyer interest. Enter Paul Sr.'s sons, Paul Jr., 41, and Andre, 32. "You can't buy 30 years," says Paul Jr. retrospectively about the attempt to close. "We need another solution." After his father sold both his camp and boat to make payroll and began suffering from health problems, including heavy drinking, Paul Jr. moved back to Carencro in July to take over restaurant management and is slowly but surely working to return the Pirogue to its former glory. Paul Sr., now seven months sober, is still extremely involved - but you'll never see him during business hours.
"I couldn't be happier with the changes," says Paul Jr. Perhaps the mother of those changes was ripping down a plywood wall only to discover an antique copper-top bar that had been covered when the restaurant opened (because families didn't frequent restaurants with bars). Now, Paul Jr. says, customers come for after-work drinks, and families are meeting up for dinner later in the evening. The atmosphere is nothing but casual, and Paul Jr. says he wants to maintain the rustic feel. The walls are made of raw cypress and antique photos, and memorabilia lines the walls, including a collection of taxidermied animals, which Paul Jr. jokes is a result of newlywed wives who tell the husbands they cannot keep their prize gazelle, elk, and fish on their walls any longer.

By working together, Paul Angelle Jr. and his father, Paul Sr., were able to turn the struggling Paul's Pirogue around. An institution in downtown Carencro, the seafood restaurant is slowly but surely returning to its former glory.

Two weeks after revamping, the restaurant was profitable for the first time in two years. "And this is the slow season!" exclaims Paul Jr., though adding, "The key wasn't to make a profit. It was to keep the restaurant open." The next steps? Making the bathrooms handicap accessible, redesigning the menus and shaking the restaurant's crawfish boil-only reputation (though Paul Jr. says it's Jake Delhomme's favorite boil house). Paul Sr. purchased a crawfish farm in 1982 and had trouble selling it, so he decided to open a restaurant where he created the recipes and did all the cooking. Paul Jr. says there are no chefs - just cooks - to stay true to the restaurant's original recipes. 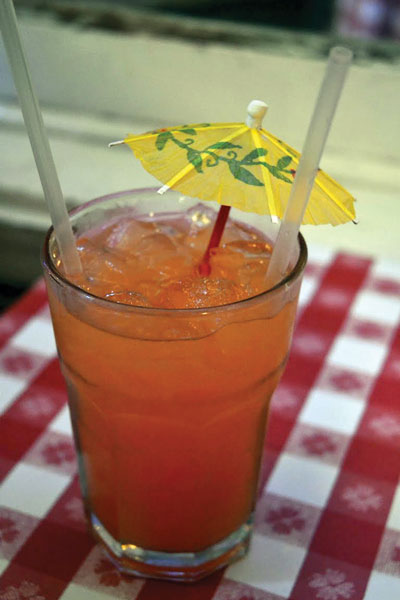 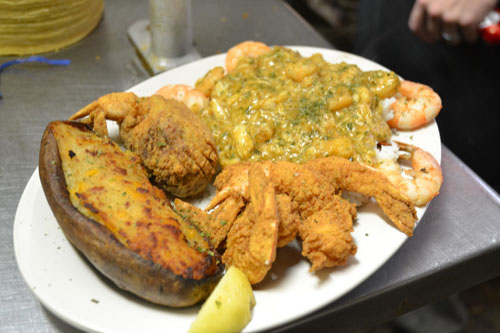 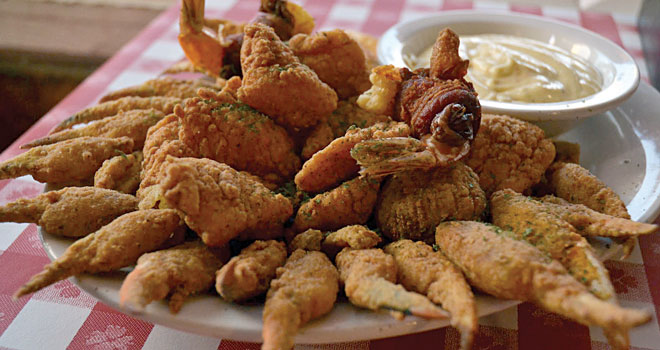 Paul's Pirogue has earned accolades from Southern Living, American Express and The New York Times for its Cajun cooking, which ranges from seafood dinners with fried catfish, crab legs, alligator and shrimp to specialty items like the Paul's Pirogue Special, a creamy combination of crabmeat, eggplant and shrimp topped with Parmesan cheeese and baked. The shrimp and crab étouffée is lighter tasting than the traditional crawfish étouffée, both $16.95, but all of the seafood is meticulously monitored by Paul Sr., who is "freakishly obsessive" about the quality of the fruits de mer. Try the house cocktail, the Tropical Storm, because  it's "almost a hurricane," says Paul Jr., who replaced the spiced rum with coconut rum and added triple sec to the famed New Orleans concoction. On Sundays, visit for a down-home breakfast: Cajun omelettes with cheese, crawfish or crabs and shrimp; or Cajun grits with cheese or shrimp.

The restaurant's most unique item is the green gumbo - though it's not exactly a gumbo. According to Paul Jr., his grandmother had a cousin or an uncle who was killed in Normandy and had his belongings shipped in a trunk to Paul's grandmother, and the contents eluded him until college when he popped the lock open only to find that it was filled with papers with illegible French scribbled on them. He brought the papers to his French professor for translation. Among them were the green gumbo recipe, which they ultimately decided was of African origin and not French. It's an unbelievable mix of hot sausage, greens, white beans and potatoes that cooks down for hours. It's unlike any dish offered by a Cajun restaurant or any other restaurant this writer has found.

Dish of the Month
Endless summer
Seasonal rules are made to be broken at The Taco Sisters.

Summer's official party pooper, Labor Day, has come and gone. Pack up your white pants and linen suits. Savor those final afternoons floating in the pool. The heat will soon wane, and the mild Louisiana autumn will take its place.

The Taco Sisters refuse to abide by the Labor Day rule - summer is still in full swing on the corner of Johnston and Vermilion streets, where diners are encouraged to picnic in the yard, enjoying Gulf seafood in delicious tacos, burritos and salads. The Fiesta Summer Salad will be on the menu through October and is a refreshing and light mélange of Taco Sisters staple produce, like black beans, corn, fresh tomatoes, avocado and jalapeño with crisp lime juice vinaigrette and in-house smoked Gulf shrimp. With the following recipe, mix up a re-creation to serve with tortilla chips for a snack or on mixed greens perfect for a change-of-pace lunch.

Toss first 10 ingredients together in a large mixing bowl for a fresh salsa blend and let flavors incorporate while you prepare the remaining ingredients.

Once prepped, add the next seven ingredients to the salsa and toss to mix well. Finally, fold the diced avocado into the mixture, taking care not to mash it.

Brunch for a Cause
For the Lâche Pas Musicians Brunch Aug. 26, Cochon conjured up a filling and satisfying brisket hash, a twist on a the restaurant's standard brunch offering.
The brisket is smoked and braised and then formed into a patty, perfectly seasoned and seared. A poached farm egg perched on top of the patty cuts the spice, the creamy yolk spilling over into the sweet but sharp mustard-molasses jus pooling under the patty. At each table sat at least one musician or politician, including State Rep. Stephen Ortego, and former Govs. Edwin Edwards and Gov. Kathleen Blanco. The event was part of a larger campaign to raise the $100,000 cut from the state budget for the Council for the Development of French in Louisiana. "Lâche Pas," the slogan for the campaign, means "don't let go" and has become a rallying cry for protecting CODOFIL's educational, cultural and economic development initiatives. So far, the effort has raised $81,000. - ER

"Love, peace and French fry grease!" is Marla Kristicevich's new motto, and her new food truck, Freetown Fries, is bringing that love to the Freetown streets with piles of fries topped with locally sourced ingredients, all while frying from inside the repurposed 1974 Prowler trailer built from reclaimed wood and covered in discarded sheet metal from The Daily Iberian's printing press.

"I bought a lemon and now I turned it into lemonade!" laughs Kristicevich.
Freetown Fries uses peanut oil to fry medium-cut white or sweet potato fries - thick enough "for girth" to withstand the variety of locally sourced toppings. The naked fries are topped with sea salt and black pepper. Dunk them in spicy ketchup, curry mustard or garlic and rosemary aioli, or opt for one of the dressed fries: staple concoctions that will stay on the menu along with seasonal additions. The Mediterranean is a pile of sweet potato fries topped with roasted garlic hummus, feta cheese, kalamata olives and parsley; The Ballpark smothers regular fries in homemade meat chili, shredded cheese, chopped onion and jalapeño ; and the French-Canadian poutine gets a Cajun upgrade in The Pooyie, a finger-licking concoction of brown gravy, crumbly white queso, green onions and a sprinkling of cayenne.

"The idea is to take fun ingredients, like anything you would put on rice," Kristicevich says. "I think it will keep the menu fresh by using local ingredients, but it will also pique people's interest." For the rotating menu, Kristicevich mentions introducing Mexican, Vietnamese or Indian influences to the fries. Negotiations are in the works with vendors at the Freetown Farmers market to provide local produce, and she says she wants to educate her eaters on their food resources so they'll become more interested and support local growers.

The truck's grand opening will be an homage to local businesses: Pack & Paddle will host the event on Sept. 14 from 4 p.m. to 8 p.m. at the first-ever FryDay and will also feature local vendors and a P&P-sponsored Style Your Sole TOMS party. The collaborative grand opening embodies Kristicevich's vision of establishing cooperative relationships with businesses. "We can go to a business and generate business for them, as well as for us," she says.

Kristicevich's plan is to use the truck for special events, but she'll stick to Freetown for lunch four days a week, and do both days and nights on the streets on weekends. Since opening the truck, Kristicevich's been hoarding the used peanut oil to save for her next investment: a diesel truck that will run on the used oil. "I want it to be ecologically conscious [in] how I produce it," she says. "I've been saving [the oil] so I can have a clearer ecological consciousness when I move around. My goal is to create a cleaner, greener way to serve food. I want to lower my carbon footprint on basically fast food. I don't want it to be fast food that's bad for you - I want it to be food that you feel good after eating."